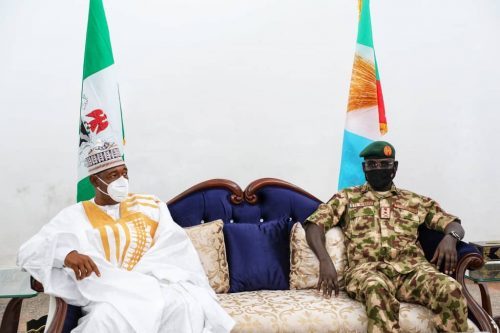 Local News
May 31, 2020May 31, 2020 Mary 0 Comments
LinkedInFacebookTweetPin
LiveChat will greatly increase the number of your satisfied customers. I've already tried it and I can recommend it as a go-to customer service tool! Sign up today for a free trial!

A colleague called me recently to seek my view of leadership in Nigeria under the present administration. He specifically asked me to evaluate the performance of my Governor, Professor Babagana Umara Zulum. That was when it dawned on me that we are yet in another season of evaluating leadership in Nigeria. I told him that, Nigerians tend to have a generalized view of leadership, to the effect that, our greatest problem in this country is the failure of leadership. But we have a different story to tell in Borno State under Professor Zulum, to the effect that we agree, Borno is lucky.

Whatever yardstick anyone may use, leadership in the Nigerian sensibility entails meeting the expectations of the citizenry through providing adequate security for citizens, social and physical amenities and good management of the economy in the face of contending challenges. I made a quick mental note and decided to add my voice to what has already become a chorus in Borno State. Professor Babagana Umara Zulum has been exceptionally awesome and Nigerians may tend to agree with me, that he is one of the best, if not the best. I made that statement knowing very well that, all the other governors may take to the media space, to give account of what they have done in the past one year, and I know that Borno State Governor, Professor Babagana Zulum will stand out above others.

In times like this, some leaders lay claims to having performed more than all others before them. Some parade projects that were executed by others as their own achievements and yet others lay claims to non-executed projects as part of their achievements. Whatever may be the situation under the present circumstances, we owe it a duty as journalists to let the world know the truth about every claims made. More than that, the public on which behalf these leaders claim to be working has a duty to ask questions and query dubious claims of performance by any political leader. The information space is now more widely open, and people can make their voices heard through the many available mediums we have today. What has been done can be verified, to the effect that, every bogus claim when verified will be a minus to any leader who makes any such claims.

For us in Borno, it has been a continuum, as the focus since 2011 has been rescuing our people from the horrors of Boko Haram and from the clutches of poverty.There may be divergence of opinions, but when it comes to governance, our personal quarrels hardly take tolls on the provision of services. We may have had disagreements amongst successive leaders in the past, but our culture is such that we do not allow personal differences to rub off on what we need to do for the public. You may recall that former Governor Mala Kachallah had his bad days out with his successor, Ali Modu Sheriff, but Sheriff built on so many of the things Mala Kachallah started. Sheriff also had a dose of political disagreement with Kashim Shettima his successor in office, but Shettima has always held Sheriff in reverence as a leader, and went on to build on his legacies. The changeover from Kashim Shettima to the present Governor, Professor Babagana Umara Zulum was seamless, as the two seem to agree on virtually everything. I must confess to you that given the challenges we are facing, it is truly awesome the development strides embarked upon by Kashim Shettima and the incumbent, Professor Zulium.

That both of them came from a background not related to politics makes them even more endearing to the people. The situation we found ourselves in for the past eleven years leaves us without the luxury of fighting at the expense of development. Those who have been to Borno in recent times will agree with me that we have experienced rapid development over the past nine years. Our leaders seem to realize that the only way they can make up for the devastation caused to the psyche of the people and to infrastructures is to embark on rapid development projects. We thank God it is paying off.

Perhaps, what makes Professor Babagana Zulum different is that he took office with a development plan and he pursues his plans with passion and with honesty. I do not have to state here that, Governor Babagana Umara Zulum hit the ground running, so to say. The positions he held before, coupled with his background and his knowledge of the state seemed to have positioned him well for the feat he has so far achieved. At the risk of sounding uncharitable to other Governors, I wish to say Professor Babagana Umara Zulum, Governor of Borno State is the best.

He has become a reference point for good governance in recent times. I am a witness to some of the outstanding things he did in the last one year and I can state without any fear of contradiction that he performed beyond our expectations. He is endowed with tremendous talent in human relations forthright, honest, pragmatic and often calculative in approach. Here is one leader who makes promises and abides by every letter of such promises. Some people described him as confrontational and highly unpredictable, because of the way he takes personal charge of affairs, but I see him as an unpretentious leader, who had to take certain decisions on the spur of moments, because of the uncertainties associated with the challenges we face in Borno. Professor Babagana Umara Zulum works with a near supersonic speed compared to the seeming bureaucratic approaches of others, and he insists on accountability.

He has put in place an ambitious cabinet, which he keeps on its toes, as members strive daily to match his pace. He has removed flamboyance from governance and plucked leakages in project implementation, by ensuring strict monitoring and supervision. Governor Zulum had executed and commissioned more projects than any Governor in Nigeria in his first one hundred days in office. There may not be enough space for me to run down the list of the projects he has executed, as that is a job for people charged with such duties. Permit me to however pay special tributes to him for the uniformity and spread of his projects across Borno State. The Governor has re-engineered the Public Service by taking up an office at the state secretariat, he has compelled strict adherence to due process in the public finance.

Unlike what others may come up with as their one year scorecards, whatever Professor Babagana Zulum comes up with as his own scoresheet will be a true reflection of what he has done. The summary of his achievements will be to the effect that Borno is working g again, notwithstanding the challenges it is facing and the attendant drain on its resources occasioned by the management of the crisis. Both in the state and outside, Professor Babagana Umara Zulum is highly rated politically and in governance. In Borno state today, the habitual critics of government have been silenced, the opposition is overwhelmed by his performance and those in his party are happy. The next round of elections is still far away, but I dare say that Professor Zulum’s prospective challengers have also been discouraged. Perhaps, for once in the history of politics in Nigeria, Borno may not be the melting pot of crisis.

Some habitual fault finders may not be happy with him, but I believe Government is for the good of the majority, and the greater majority in Borno are happy with the Governor. It is not possible for everybody to be happy with the Governor, but I dare say, it is even ridiculous for one to have a different view in the face of the realities on ground. Those who may not be happy for whatever reasons do not have any justification. Change comes with certain inconveniences, and that is why some people are opposed to some of President Muhammadu Buhari’s change policy. It is the same thing here, some people may not be happy: not because the changes are not good, but the benefits therefrom are not coming to them personally, but to the people. Some of them cannot fathom the fact that somebody else; a virtual greenhorn in politics to be the one bringing about the changes.

I join other citizens in felicitating with Governor Babagana Umara Zulum and his deputy, Umar Usman Kadafur. In doing so, I pay special tribute to all those who contributed in one way or the other to his emergence as governor and to all those who have been working with him leading to the huge achievements.

Bwala writes from the farm in Marama