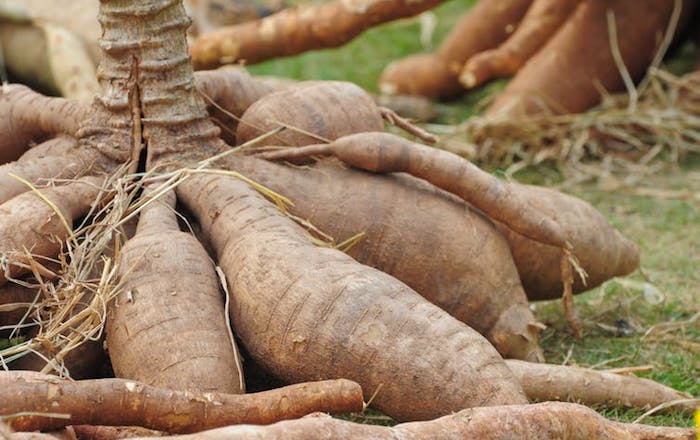 Despite being the world’s largest cassava producer, Nigeria is among the top global importers of cassava by-products such as edible starch, sweetener, and ethanol.

This is because the country has failed to take advantage of its cassava production as it spends millions of dollars yearly importing these cassava by-products, thereby putting pressure on Nigeria’s foreign exchange reserves.

Also, Nigeria has continued to import thousands of jobs it could have created if the country could boost the production of high-quality cassava roots and add value.

A report by the Food and Agricultural Organisation (FAO) identified policy flip-flop, inadequate access to consistent supplies of high-quality cassava roots, good transportation network for conveying the fresh crop to processing plants, and lack of power for processing equipment to process high-quality flour as factors limiting cassava processing in the country.

A 2017 sectorial report by the Manufacturers Association of Nigeria (MAN) showed that the country imported $654 million (N235.4 billion) worth of cassava by-products that year.

To curtail the country’s high importation of cassava by-products and ensure that the country benefits from the comparative advantage it has in cassava production, the Central Bank of Nigeria (CBN), in 2019, restricted FX for importers of starch, ethanol, and high-quality cassava flour.

The move by the apex bank was also to spur massive investment in the cassava downstream value chain.

Part of the strategic approach of the Central Bank to deepening cassava industrialisation for all-inclusive growth is adequate financing of the cultivation and processing at the small and medium-scale levels.

To achieve this, the CBN, in 2019, sponsored about 15,000 farmers to cultivate over 15,000 hectares of cassava farmland in 19 states as part of its efforts to use the cultivation of 10 crops to create 10million jobs in five years.

According to him, CBN initiated two programmes to boost farmers’ productivity of the crop – conventional one hectare per farmer and the ‘five star.’

He says that the conventional one hectare per farmers programme allows cassava growers to increase their cultivation area by an additional hectare and funds are provided in the form of inputs, while the ‘five star’ is a new strategy that implies that a farmer will be provided with funds to five hectares.

Nigeria is the largest producer of cassava in the world with about 46 million metric tonnes and an average yield per hectare between 10.6 to 15 metric tonnes.

Cassava has major industrial products like starch, ethanol, flour, glucose syrup, sweeteners, amongst others. These products are also raw materials for numerous industries with limitless domestic and export market potentialities.

Starch is used in many areas across food and beverage firms for the production of caramel, biscuits, bread, and confectioneries. It is also used in pharmaceuticals and in non-food industries, such as battery firms, gum, and super glue, among others.

Experts have called on the apex bank to also support farmers with high-yielding cassava roots as low yield per hectare and poor weed management remains the biggest challenges confronting farmers.

“Farmers are not getting the yield they are supposed to get and this makes them not break even. If the production of cassava is not attractive, farmers will not expand their production areas,” said Abdulai Jalloh, project leader, African Cassava Agronomy Initiative.

He said that some of the limiting factors hindering higher productivity in cassava production are poor weed control and the high cost of farm inputs.

Research across the globe shows that some countries have started using micro-nutrients to upscale cassava yields to about 100 metric tonnes per hectare with starch content of cassava up-scaled to 38 per cent in Indian and 40 per cent in Malaysia.

Jalloh stated that if Nigeria must take advantage of the high potential in cassava production, farmers need varieties with high starch content, adding that the government must initiate policies that would boost cassava production in the country.

Cassava requires less labour than all other staple crops. However, it requires considerable post-harvest labour because the roots are highly perishable and must be processed into a storable form soon after harvest, experts say.