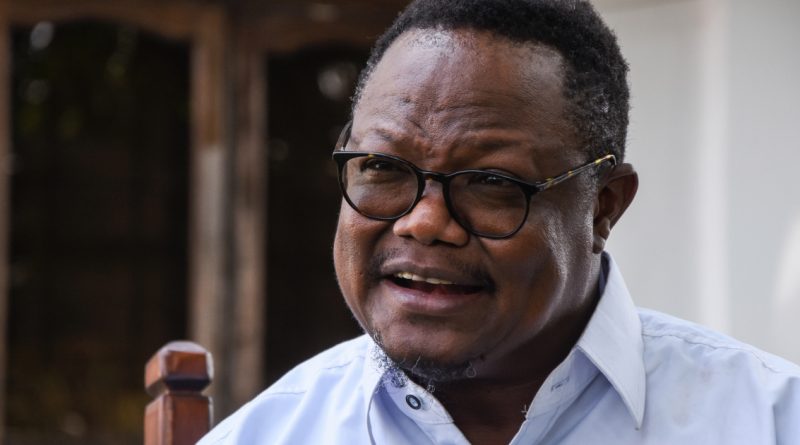 Voters in Tanzania’s mainland and the semi-autonomous archipelago of Zanzibar will head to the polls in two weeks to elect their presidents, as well as members of parliament and councillors nationwide.

In a bid to unseat the governing Chama Cha Mapinduzi (CCM) party, which has been in power for decades, the country’s two leading opposition parties have decided to form what has been dubbed a “loose” collaboration and endorse a common candidate for the October 28 polls in each region.

Freeman Mbowe, chair of opposition party Chadema, said on October 4 that his party would withdraw its presidential candidate in Zanzibar and back Seif Sharif Hamad, of the ACT-Wazalendo party, against incumbent President Ali Mohamed Shein.

The announcement came some two weeks after Hamad, national chairman of ACT-Wazalendo, said his party would support Chadema’s Tundu Lissu in the mainland to challenge President John Magufuli.

Since then, several top leaders from both parties, such as ACT-Wazalendo’s Zitto Kabwe and Chadema’s Salum Mwalimu, have regularly endorsed each other’s MP and councillor candidates at various campaign rallies.

Notwithstanding disagreements about the allocation of local posts, there is another factor that has prevented the two parties from formalising their cooperation.

According to Tanzanian law, parties interested in forming an official coalition are required to sign an agreement at least 90 days before elections are held, and have it approved by the country’s Registrar of Political Parties.

While informal collaboration does not technically break the rules, the Registrar of Political Parties last month warned party officials against endorsing each other’s candidates.

Several months ago, a number of smaller opposition parties came out in support of candidates for the incumbent CCM. At the time, these collaborations were not faulted by the Registrar of Political Parties, but retrospective cautions have been issued following the warning to ACT-Wazalendo and Chadema.

Opposition politicians have repeatedly alleged a campaign of harassment by the government, including the disqualification of dozens of parliamentary candidates from running in the upcoming polls.

Zanzibari journalist and political analyst Salma Said pointed to the pragmatism of the collaboration between the ACT-Wazalendo and Chadema in the face of the mass disqualifications, which are expected to weaken the two main opposition parties’ traditional strongholds.

“This collaboration will provide an opportunity to have representation from the opposition.”

CCM and its predecessor, TANU, have governed Tanzania uninterrupted since independence in 1961. It has won every election since the return of multiparty politics to the country in 1995.

Five years ago, at a time when public opinion started to turn against the CCM as a result of endemic corruption, many believe that Magufuli’s nomination saved the party from defeat.

At the time, Magufuli was roads minister and not an obvious pick but he was well-known for his no-nonsense approach and outspoken stance against corruption.

Since then, the party has retained the support of many Tanzanians partly due to its social-economic policies and infrastructure development spearheaded by Magufuli since taking office.

However, critics of his administration have decried the deterioration of human rights and shrinking democratic space in the country over the past five years – and for many voters, these two issues are central to this year’s general elections.

Yet even if the opposition manages to boost its numbers, the longevity of any cooperation is uncertain given the deep-seated mistrust between members from both parties, according to Thabit Jacob, a Tanzanian political analyst based in Denmark.

“Despite this, the collaboration is beneficial for both parties based on their strengths and weaknesses. Chadema, for instance, has a stronger base in the northern part of Tanzania, while  ACT-Wazalendo has more support in the southern region and in Zanzibar,” he said.

As ever, 2020’s campaign season has been fuelled by enormous, lively political rallies. Yet while CCM’s flagship events are headlined by the likes of Afro-pop superstar Diamond Platnumz, the opposition is limited to blasting out its pre-recorded campaign songs and Bob Marley’s One Love.

And even though both leading opposition parties still draw large crowds of supporters, some say they are doing so after five years of narrowing political freedoms that have resulted in an increasingly unequal playing field.

Earlier this week, Amnesty International criticised Magufuli’s administration for intensifying its crackdown against critics and opposition parties in the lead-up to the polls.

In its report, the international rights organisation said opposition parties were facing harassment, arbitrary arrest and intimidation from authorities and accused the government of selectively applying the law to hamper its opponents’ efforts.

Soon after his election win, Magufuli banned political rallies, which had been the main way for opposition campaigners to spread their message since the country’s first multiparty elections in 1995.

This left the opposition being able to campaign only in the immediate run-up to elections, while the sitting president was free to do so year-round.

Throughout his presidency, Magufuli has spent much of his time touring the country meeting citizens. Nicknamed “The Bulldozer”, he has even gained something of a reputation for resolving voters’ grievances instantaneously while on tour, often issuing orders to local government representatives live on camera at roadside meet and greets.

Meanwhile, live broadcasts of parliamentary sessions were suspended in 2017 amid protests from CCM about their expense. Along with the ban on rallies and the frequent disbanding of internal meetings by the police, the cancellation of the broadcasts dealt another heavy blow to opposition politicians trying to engage with voters.

Separately, a gradual crackdown on the media has effectively muzzled critical voices – since 2016, more than 10 outlets have been banned for at least week for breaching increasingly restrictive rules. As a result, many media organisations avoid interviews with contrarian politicians, for fear of fines or closure.

The government has previously rejected the accusations of stifling dissent.

Against this background, political analyst Elsie Eyakuze said although collaboration may seem like a practical option for the two leading opposition parties, such a move was not without flaws.

“In the short term, the opposition collaboration is a pragmatic move to try and break the stranglehold of the ruling party,” she said, adding, however, that such a move asks voters “to abandon party loyalty, ideals and even critical examination of the candidate on offer.

“In the long term, they are making politics a black-and-white issue of raw competition. We are being robbed of a range of ideas and rich debate; they are feeding into a cult of personality and there is no clarity on how they would govern if they won.

“So, the short term opportunism might be exciting and carry voters up in a groundswell, and like any sweeping euphoric moment it can mask a lot of pitfalls.”