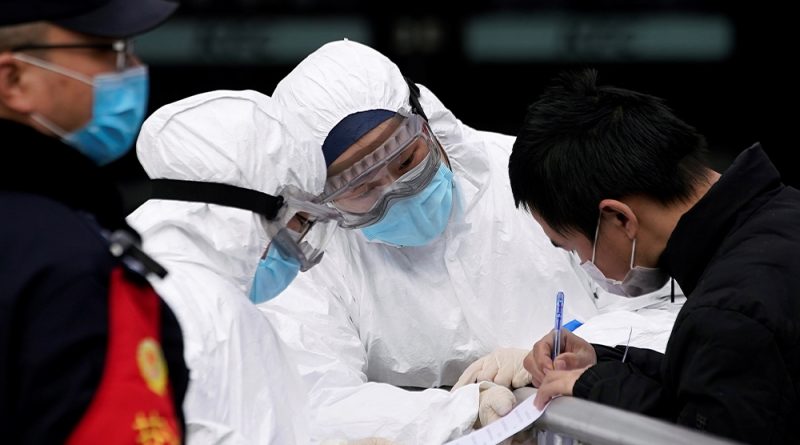 The death toll in China from the deadly coronavirus outbreak that originated in the central city of Wuhan, rose to at least 361 on Monday, as the Philippines became the first country outside China to confirm a death from the infection.

The National Health Commission said there were 57 new fatalities on Sunday, all but one of them in Hubei, which has been effectively sealed off from the rest of the country for more than a week.

The total deaths nationwide was at least 361, with 17,205 people across the country infected with the virus, after 2,829 new cases reported.

Other countries have rushed to evacuate their citizens from Wuhan and Hubei, while many have also imposed extraordinary travel restrictions on travellers to and from China. Wuhan is the capital of Hubei.

Many of those brought out of Wuhan have been put in quarantine for 14 days and monitored for any sign of the infection. About 150 cases have been reported in two dozen other countries.

Dr Ali Khan, the Dean at the University of Nebraska Medical Center College of Public Health, told Al Jazeera the outbreak was a significant test of the world’s public health systems.

“What we have available to us is good public health measures,” Dr Khan said. “That means identifying those that are sick, getting them into the correct hospitals and making sure we do good contact tracing. This new coronavirus is a stress test of emergency preparedness of public health capabilities in countries worldwide.”

China has designated 27 hospitals in Wuhan for the treatment of coronavirus, the official Global Times reported on Monday.

Previously, people who suspected they were ill with the infection could go to only seven hospitals, causing long queues and days-long waits for treatment.

Over 12,000 hospital beds for #nCoV-2019 infected patients will be available in #Wuhan, the epicenter of the novel #coronavirus, as Wuhan govt plans to designate 27 more hospitals for the treatment of coronavirus. pic.twitter.com/Jxbkt5onoa

It is also building two giant field hospitals with the first of them due to go into operation on Monday.

“This is a hospital we’ve been talking about the last week or so, which has been been built in 10 days,” said Al Jazeera’s Scott Heidler, who is in Beijing. “It will be staffed by about 1400 Army medical people, workers, personal, doctors, nurses.”

Australia’s Foreign Minister Marise Payne said 243 citizens and permanent residents were evacuated from Wuhan on Monday on a government-chartered aircraft to Christmas Island, a remote Ausralian territory just south of the Indonesian island of Java.

They will be kept in quarantine at a detention centre on the island that Australia has previously used to hold asylum seekers.

“We have prioritised vulnerable and isolated Australians which is reflected in the fact that 89 of the Australians on the flight are under 16 and five are under two,” Payne told reporters in Canberra.

All passengers and crew were being given masks and hand sanitiser, and the crew were being told to remain on the upper deck of the plane except for when needed to man the doors.

“It’s a lot safer, a lot cleaner than being in a restaurant, in an office,” he said.

Vietnam’s health ministry confirmed an additional three cases of the coronavirus on Monday, bringing the country’s total to eight.

Vietnam has declared a public health emergency over the outbreak, and halted all flights to and from mainland China. 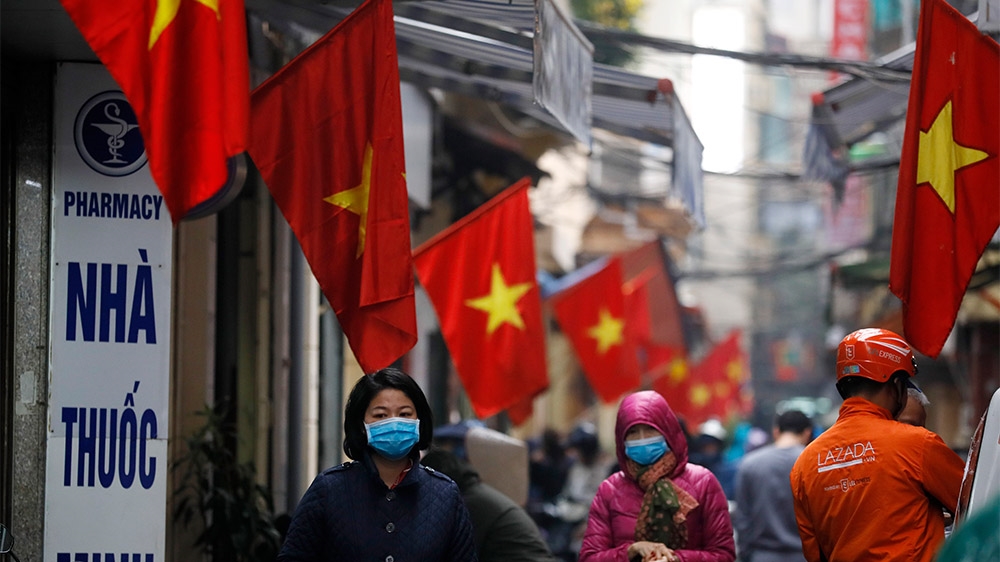 The government has also advised citizens to limit large gatherings.

Canada plans to airlift citizens from Wuhan via Hanoi

Canada said on Monday it planned to evacuate citizens from Wuhan via the Vietnam and that a chartered aircraft was on the ground in Hanoi awaiting clearance from the authorities in China.

Canada said all passengers would be screened before boarding and monitored throughout the flight to Trenton in Ontario, where they, the crew and diplomatic and military officials on the flight would remain in quarantine for 14 days.

“We have been working with all levels of government, public health officials and our international partners to ensure the safe return home of Canadians from Hubei Province, including staff and the flight crew,” Health Minister Patty Hajdu said in a statement. “Our plan is focused on ensuring the health and safety of all Canadians.”

Chinese stock and commodity markets fell heavily at the start of trading on Monday, the first session after an extended Lunar New Year break, as investors dumped risky assets in response to rising fears about the spread of the coronavirus.

The Shanghai Composite index opened down 8 percent at its lowest level since February 2019. If the losses are sustained, it would be the biggest daily drop since 2015.

China completed building a 1,000-bed hospital for treating patients of the new coronavirus in just 10 days.

A second hospital with 1,500 beds is under construction. 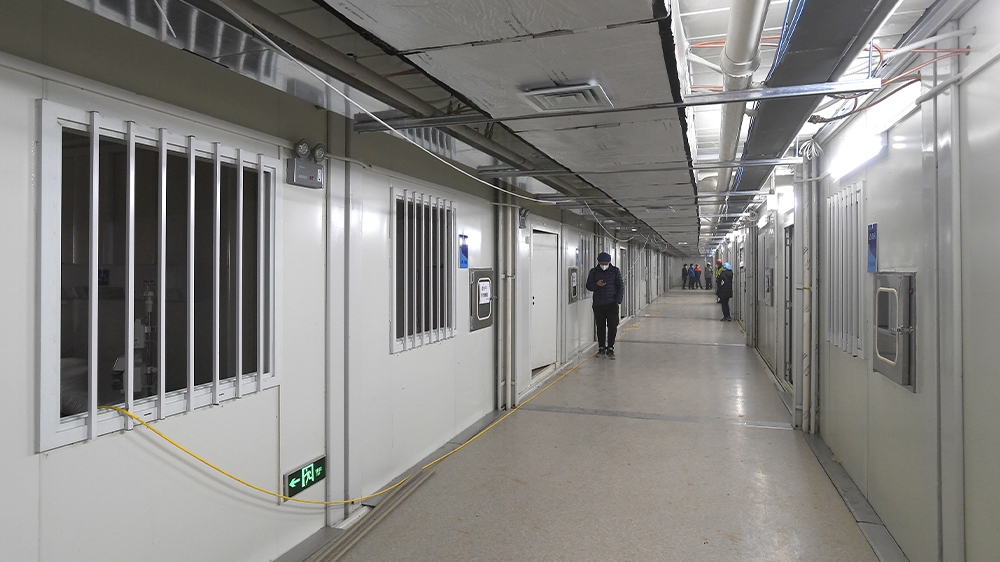 A corridor between patient rooms at the Huoshenshan Hospital in Wuhan. The field facility was built in just 10 days [Shepherd Zhou/EPA]

British drugmaker GlaxoSmithKline is collaborating with the Coalition for Epidemic Preparedness Innovations (CEPI) towards developing a vaccine for the coronavirus outbreak, according to a statement from GSK and CEPI.

GSK will make its “adjuvant platform technology” available for developing a vaccine against the virus.

The use of adjuvant allows for the production of more vaccine doses.

GSK will work with researchers funded by the CEPI with the first agreement signed with Australia’s University of Queensland, the statement added.

There is currently no vaccine available against the coronavirus but several organisations including CEPI, a public-private body based in Norway are working at developing one.

France’s Pasteur Institute Foundation said on Friday it had set up a taskforce aimed at developing a vaccine against the virus in 20 months while Germany’s research minister said she expected a vaccine to be developed within “a few months”.

China’s stock markets are expected to fall on Monday when they reopen after the Lunar New Year holiday that was extended because of the coronavirus outbreak.

Markets in the world’s second-biggest economy have been closed since January 24, and reopen in Shanghai at 9.30am (01:30 GMT).

The government has been marshalling its forces to contain the economic fallout.

The central bank said on Sunday it would pump 1.2 trillion yuan ($173bn) into the economy. The day before it said it would step up monetary and credit support for businesses helping the fight against the virus, such as medical companies.

“Investors will release their emotions at first and then make further decisions based on the epidemic situation and the potential stimulus measures rolled out by the government,” said Zhang Qi, an analyst with Haitong Securities.