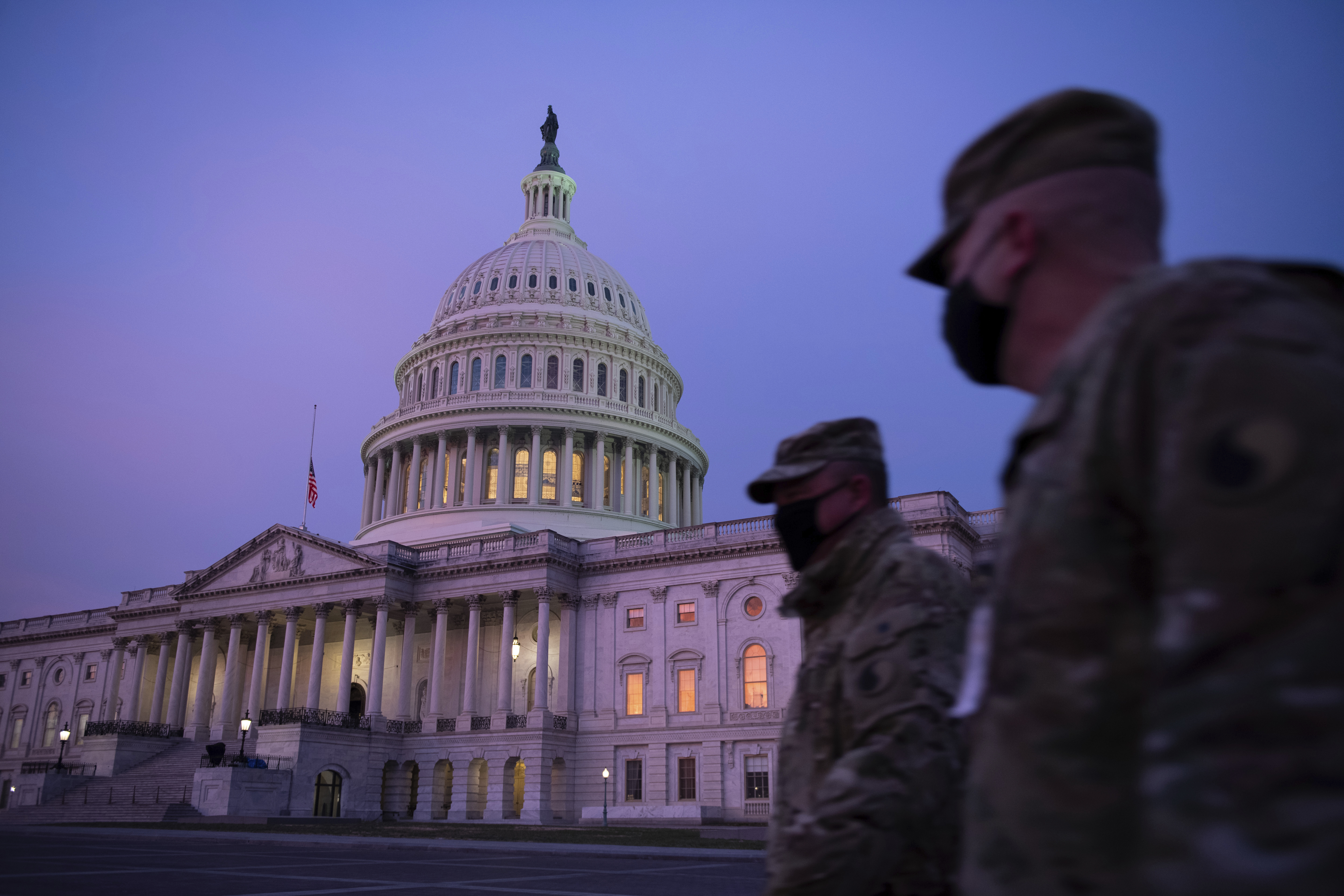 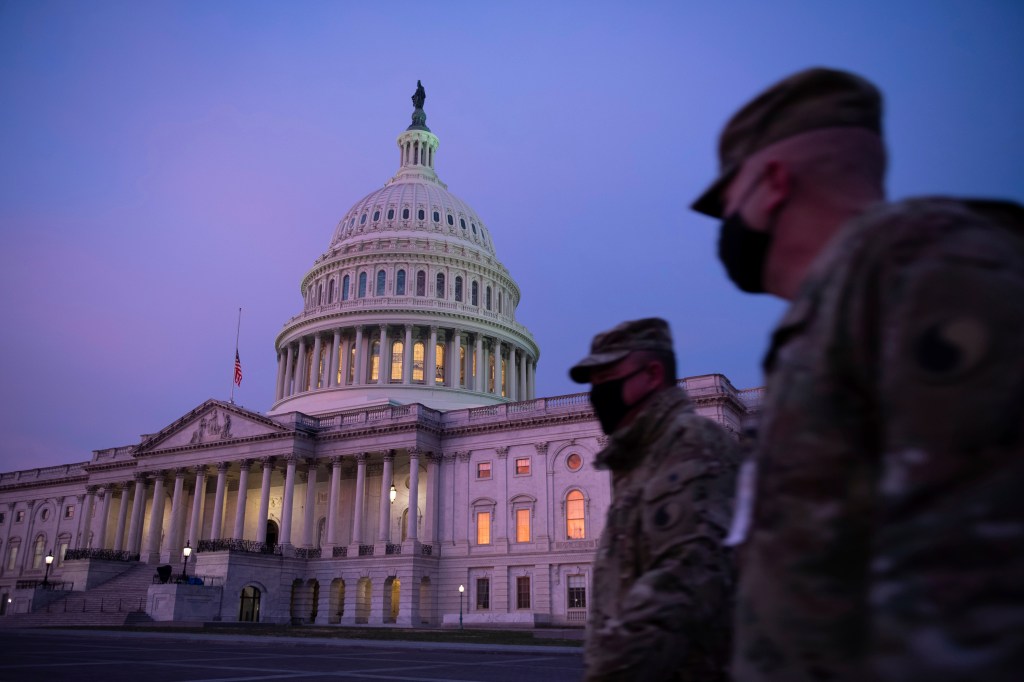 The Capitol in Washington, D.C., is under heavy guard.
Sipa USA via AP

As Washington, D.C., and state capitols throughout the U.S. are on high alert for potential civil unrest, retailers are feeling the anxiety and monitoring developments by the hour.

With expected protests and the potential for further violence leading up to the presidential inauguration, retailers are in touch with law enforcement and monitoring social media to gauge the level of threat to their people and properties. As of Friday, they’re generally not expecting looting or destruction. However, with the nation feeling tense and in a state of readiness, and with a formidable presence of police and National Guard troops in state capitals and Washington, D.C., few people will be out and about shopping, except for anything of an immediate, essential need.

Sources contacted Friday said they weren’t aware of retailers taking special precautions in the days leading up to Wednesday’s presidential inauguration, to the degree they did last summer during the marches protesting the killing of George Floyd and social injustice. Looting by those not involved in the protesting did occur in several cities and many stores were vandalized. In protest areas, retailers boarded up their storefronts, added security, and relocated merchandise to limit their losses from rioters.

“Retailers within close proximity to the state capital cities and actual capitol buildings is where the concern is now due to the potential for civil unrest,” said Christian Beckner, the National Retail Federation’s senior director of retail technology and cybersecurity, who is also involved supporting physical retail security.

“In most cases, the state capitol buildings are nowhere near retail hubs, but there are cases where the capitol building is right downtown,” said Beckner, citing Atlanta; Madison, Wis.; and Boston. Washington, D.C., would be another area of concern, he said.

States where the presidential election was not contested would likely be less at risk for civil unrest in the coming days, Beckner suggested.

Beckner said the NRF has been sharing guidance from the Federal Bureau of Investigation and the Department of Homeland Security with retail members of the trade organization.

With 20,000 National Guard troops in Washington, D.C., as well as private security and law enforcement, there is no greater security presence in the world now, according to Kevin Davis, director of GardaWorld Security’s consulting services division.

Expecting the country’s security posture to more significantly change since the riots at the U.S. Capitol on Jan. 6, Davis has been busy advising clients about preventive measures in anticipation of any civil unrest.

With 65 or so clients in D.C., including many retailers, Davis said their concerns are civil unrest, rioting, destruction of property and people getting hurt. “There is a lot of anxiety right now,” he said.

Industry sources said they believe retailers are generally not taking elevated security precautions as they did last summer, though they would be regularly communicating with employees to make sure they have an awareness of what’s going on, and if additional security measures were warranted. They also said they don’t believe retail would be specific direct targets of extremist activity in the coming days, but there could be some “spillover.”

Retailers prefer not to discuss specific security measures publicly. They don’t want potential looters to know what they might be up against, nor do they want to stoke fears.

Nancy Pearlstein, who has owned the Relish fashion boutique in the Georgetown section of Washington, D.C., for 27 years, said Friday she planned to keep her store open. “Of course, it’s constantly fluid. If something happens and it takes a turn for the worse, we will modify that accordingly. But for the moment, as tragic all of this is in a certain sense, it is still a very happy and celebratory time. We would like to participate in that,” she said.

Typically, the days around the inauguration are busy in Georgetown, with many tourists and other people being out and about and coming into the city, she said. Inaugural week in years past has generated an uptick in store traffic with tourists and inauguration attendees, who have heard about Relish being keen to check out the store. Others have just happened upon it strolling around Georgetown, she said.

As for the current mood, Pearlstein said, “It’s a little bit tense right now. It’s very hard to get around the city. There are a lot of street blockages, and a lot of military hopes and police. Although we’re used to it to a certain extent, this is much greater.”

Macy’s Inc. has four Bluemercury stores and a Macy’s in Washington, D.C. “The safety of our colleagues and customers is our top priority,” said a spokeswoman. “Our teams are closely monitoring potential issues in nearby locations, and we will take precautions as necessary.”

The Athleta activewear division of Gap Inc. has a store in Georgetown, which is not far from the Capitol. “As always, our number-one priority is the safety and well-being of our teams, customers and communities,” said an Athleta spokeswoman. “We have contingency plans set in place to manage issues that may arise and will continue to monitor the situation carefully and closely.”

“We monitor social media and we have a group that maintains security on each of our properties,” said Steven Tanger, executive chairman of Tanger Factory Outlet Centers Inc. “We hope that it will be a peaceful transition of government but we are prepared should something happen. Keep in mind our properties are located out of the center cities, but we are also very, very cautious. We’d rather be prepared than surprised.”

During the summer looting around the country, “Fortunately whatever happened was minor certainly compared to other major cities. Hopefully that is behind us and hopefully with the new administration we can move forward.”

“We have been in very close contact with the NYPD and monitoring the situation closely on social media,” said Jerome Barth, president of the Fifth Avenue Association in Manhattan. “I know of no known threat at this time. There is nothing on the horizon, to my knowledge. I don’t know of any retailers boarding up.”

Law enforcement officials in Philadelphia; Washington, D.C.; Austin, Texas; Portland, Ore., and Atlanta indicated that they are carefully monitoring the situation and have protocols in place, should there be any significant disturbances.

In Philadelphia, retailers and businesses were not advised to close or board up their properties in the lead-up to the swearing-in. “We will keep the public apprised of any change, if they are warranted,” a spokeswoman for Philadelphia Mayor Jim Kenney said. Noting that the safety and well-being of Philadelphians is the city’s top priority, the spokeswoman said officials will continue to monitor the situation. “At this time, there are no known credible threats to Philadelphia,” she said.

Although there were also no known credible threats as of Friday in Portland, officials there were prepared for any civil disturbances. The city was rocked by ongoing protests and vandalism last year for months and officials are encouraging unity in advance of the inauguration. The Portland Business Alliance in Oregon was following the lead of Portland Police Bureau Chief Chuck Lovell, who reminded the community Thursday how planning has been in the works leading up to Wednesday.

The PPB has been working with local and federal partners on a coordinated effort to maintain peace. In the event of any reports of people committing criminal acts of intimidation, property destruction and violence, the PPB will “make arrests and present the best possible cases to the district attorney for prosecution consideration,” Lovell said.

“We can come together to overcome struggles. We can work together to create peace and justice. We can love and support each other as brothers and sisters in spite of differences,” he said.

The Atlanta Police Department, for example, is working closely with local, state and federal law enforcement agencies to respond, should protests or illegal activity occur, a spokesman said. “If activity begins to occur, APD is prepared to respond quickly. We do not share operational or security plans. However, the safety and security our city and citizens is our priority,” the spokesperson said.

To that end, the APD has canceled some regular days off for officers and has added more 12-hour shifts to ensure adequate staffing to respond to protests or any illegal activity, the spokesperson added.

The Chicago Police Department has lined up additional security for the area near Trump Tower and the Wrigley Building. There are also more police officers being deployed downtown through the inauguration. The city of Chicago will activate on Wednesday its Emergency Operations Center, a public-private partnership that is designed to keep businesses and citizens informed in real time of any unexpected circumstances or dangerous situations.

A spokesman for the Magnificent Mile Association, an organization that represents scores of retailers and businesses, was not aware of any further precautions that were being taken by the majority of buildings’ management and property owners. A few boutiques like AllSaints had decided to close Wednesday, he said.

Informed about planned assemblies on Inauguration Day, the Austin Police Department in Texas is working with law enforcement partners at DPS “to ensure people are able to peacefully assemble and voice opinions, and we are able to keep people safe during that process,” an APD spokesperson said.

“We fully respect people’s ability to exercise their First Amendment rights, and we will be prepared to respond as needed to ensure the community’s safety,” the APD spokesperson said.