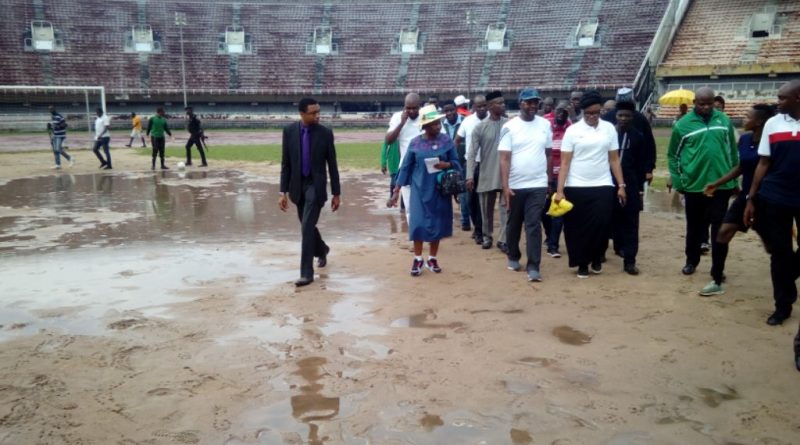 The Honourable Minister of Youth and Sports Development Mr. Sunday Dare has charged the Implementation Committee of the Report of the Ministerial Taskforce on National Stadium Surulere, Lagos to carry out their assignment with dispatch, even as he assured that the edifice would be restored to it’s original blueprint.

The Sports Minister made this assertion while presiding over the inaugural meeting of the Ministerial Implementation Committee on Monday.

He said the Ministry had begun a journey to restore the monument to its original glory.

He said ” The committee’s role is to ensure delivery of the facilities at the stadium in line with the new vision of the Ministry on the comprehensive audit at the National Stadium, Surulere,” Dare stated.

“This is a monument of national pride which had suffered neglect for over 18 years due to limited resources. We have seen a departure from its original blueprint to a point in which you could hardly recognise the National Stadium Surulere as a sporting facility.’’

The Minister recalled that on 9th June 2020, he had set up a Ministerial Taskforce on the National Stadium Surulere to verify and screen the legality or otherwise of the occupants.

According to him, ‘’The National Stadium is a Federal Government property and therefore no private or individual structure should find its way there without the approval of the Federal government of Nigeria and the Ministry of Youth and Sports Development, cleared from the office of the Honourable Minister. Any of such structures that falls short of these two major approvals is in contravention and as such remains illegal ’’

The Sports Minister expressed confidence in the committee headed by the Permanent Secretary of the Ministry of Youth and Sports Development, Mr Gabriel Aduda, and other seasoned Sports administrators and experienced individuals from the Ministry and the organised private sector to carry out the task of restoring the National Stadium Surulere to its original blueprint

Responding on behalf of the Committee, the Permanent Secretary, Mr. Gabriel Aduda while thanking the Sports Minister for the opportunity to serve, assured that the Committee would deliver on its mandate/terms of reference within the time frame.