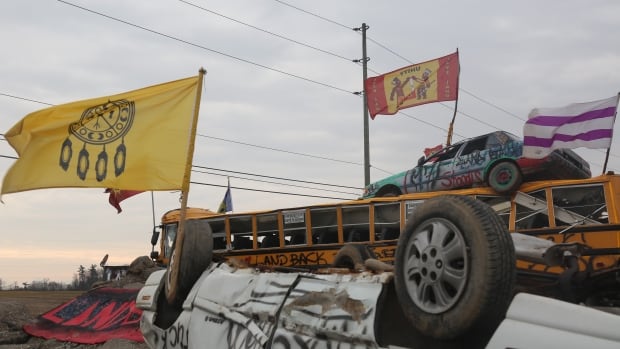 Standing in front of a barricade in Caledonia Ont., Skyler Williams called for the same thing he says his group has been requesting for the past 118 days — nation-to-nation negotiations between Six Nations and the Canadian government.

“We, as a community, are ready for those talks to happen and I think we are about 117 days short of being on time for those discussions,” said the 1492 Land Back Lane spokesperson on Friday.

The occupation of the McKenzie Meadows development, dubbed 1492 Land Back Lane by demonstrators, has stretched on for months, including blockades across area roads, court-ordered injunctions for the people staying there to be removed and dozens of arrests.

While they await word from the government, Williams said there has been movement within Six Nations.

A media release sent out by the demonstrators this week included quotes from both elected chief Mark Hill and Colin Martin, a liaison for the Haudenosaunee Confederacy Chiefs Council, the traditional Six Nations government.

“1492 Land Back Lane is another chapter in the story of resistance against the further encroachment of our lands and these actions will not stop,” read a statement from Martin. “Unresolved land claims have been a continuous issue in the country and the first step to true reconciliation is honouring the treaties made with our ancestors.”

During a radio update to the community last week, Hill thanked the chiefs council and clan mothers for letting him attend an informal meeting to discuss the “ongoing dispute around McKenzie Meadows along with other issues that have been having a negative impact on our overall relationship.”

“We hope in the days ahead that we can work in unity to focus on the common goal of addressing our Six Nations land claims,” Hill added in his address. “It’s time for the provincial and federal governments to right their wrongs.”

Williams said conversations in the community have been taking place in an attempt to bridge that divide and speak with one voice at the table when negotiations begin.

“I’m really encouraged by that,” he said. “It doesn’t matter what family you come from or what governance structure you support because everybody understands that these are our lands.”

Now they need someone to sit down and speak with.

Government says it wants to meet

The property being blocked by demonstrators is part of the Haldimand Tract, granted to Six Nations of the Grand River in 1784 for allying with the British during the American Revolution. The granted land encompassed 10 kilometres on both sides of the 280-kilometre Grand River which runs through southern Ontario and into Lake Erie. Six Nations now has less than five per cent of its original lands.

The Six Nations elected council has an ongoing court case, filed in 1995, against Ottawa and Ontario over lost lands. It is scheduled to go to trial in 2022.

Foxgate Development Inc., the developer behind the McKenzie Meadows subdivision, argues the Ontario Land Registry Office had title to the land in question and that it was legally sold more than a century ago.

A July 24 statement from the elected council said Six Nations had been “accommodated” in two ways for the development, first in 2016 with 42.3 acres and again in 2019 in the form of $325,000, which was put into a land banking account.

Williams said he’s aware of “back channel talks” involving the elected and traditional governments, but no firm details on a time or place for talks has been laid out.

A statement on Friday from the office of Carolyn Bennett, Minister of Crown-Indigenous Relations, said government officials have been in regular contact with representatives of the Six Nations elected and chiefs council with an offer to meet.

The government is “committed” to working to address the longstanding land claim issues and understanding “how Canada can support their vision and aspirations for self-determination,” it reads.

“We look forward to meeting with the community at the earliest opportunity.”

Hoping for a peaceful result

In the meantime, Williams said people at the site are focusing on hunkering down for the winter, insulating structures and cutting wood for the stove.

Last weekend the demonstrators invited Caledonians into their camp, including critics, to talk about what’s been going on.

“We talked about history, we broke bread. It was good conversation,” said Williams.

“They were saying the exact same thing that we are, that the province and the feds need to be getting to the table and they need to be doing that 117 days ago,” he said.

The fact that they’re coming to the table at this late date is a slap in the face to them and us.”

Williams said there has been no discussion about removing the barricades that block Argyle Street South, McKenzie Road and Highway 6.

Before that can happen negotiations need to begin and people at the camp need to feel safe, he said, pointing to a line of OPP cruisers up the road and calling for police to deescalate the situation.

“We’ve been hoping and praying for a peaceful result in all of this,” said Williams.