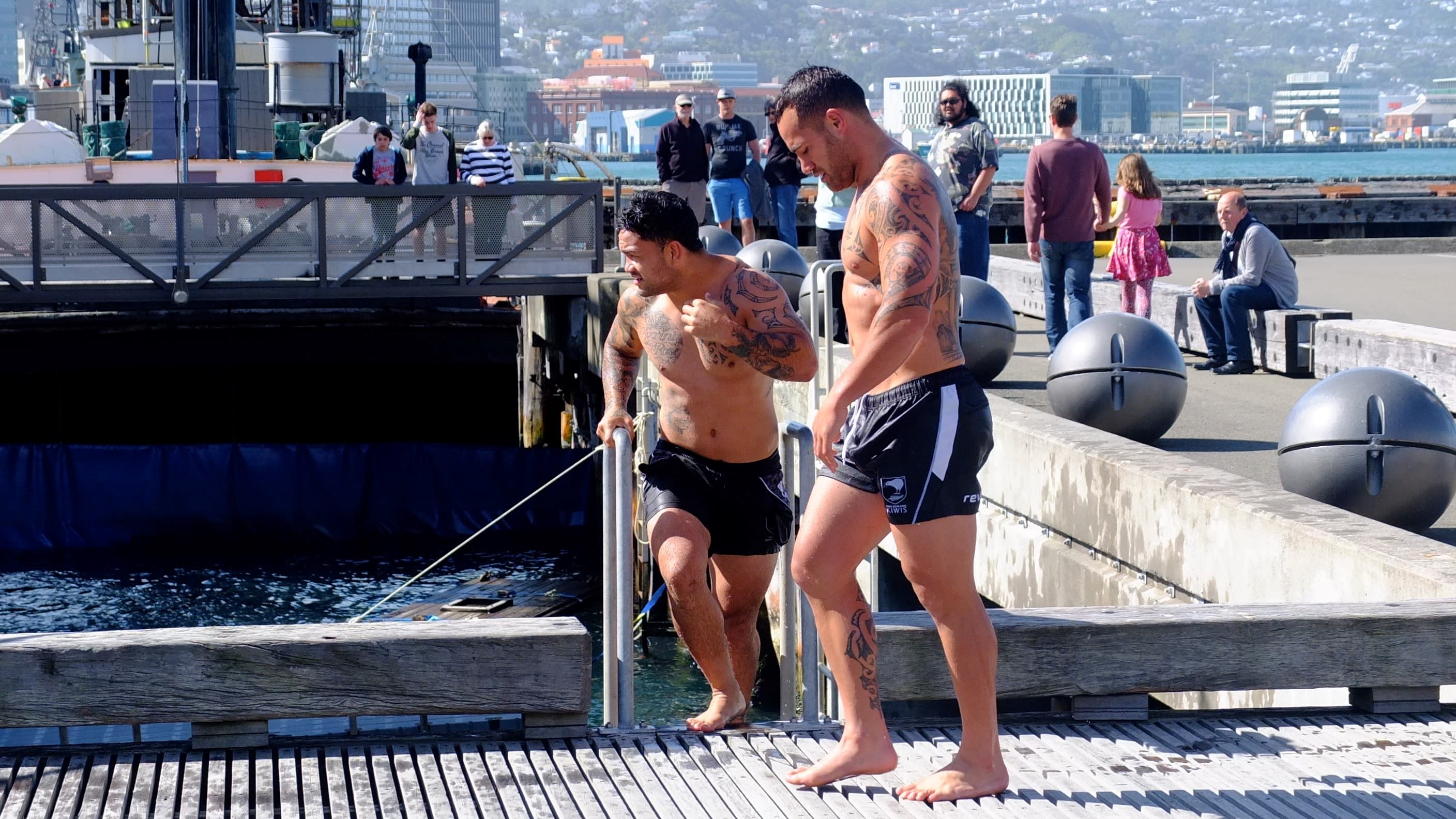 “The young boy leaps, the muscles in his thighs tensing and twisting as he lifts from the handrail”: the noble art of bombing, by Pātea writer Airana Ngarewa

A beautifully muscled boy is posted on the side of a pool, his feet fixed to the top of a pair of rusted handrails, an empty water bottle in his hands, his weight balanced, his expression determined, his knees bent, the lifeguard distracted, one of his mates watching her and the rest edging him on. You got this, bro. Leshgo. Hurry ow, ‘fore she turns around. The day is late; the sun’s harsh rays are settling and the boys well sun-burned – not that they’ll know until the morning. A darling little girl in an oversized t-shirt is doggy paddling in the deep end, ready to duck her head underwater when the young boy leaps, waiting to hear the full glory of the manu. She likes listening more than she likes doing her own; you can never hear your own, she reckons. Feel them, yeah, but you can never hear them. A symphony of 90’s hip hop blasts over the sounds of play. Splashing and yelling and ducking friend’s heads underwater and laughing. The Bluetooth speaker distorts whenever the bass kicks, but the boys know no different; they figure that’s just how they made music back then, over there, in the states. A group of older boys, teenagers, are laid out on the concrete, drying off, their backs unburned but peeling, one of the few favours dark skin offers in this mixed-up place.

A set of spotlights dot the third of seven concrete steps; they haven’t shone in years; for the boys, they are nothing more than a landmark, a thing to measure their manus against. The top step is a concrete table for 11 siblings sharing four scoops of chips with white bread and margarine and tomato sauce, the thick scent of deep-fried oil catching the breeze, mixing and marrying with the all-over smell of sunscreen and chlorine. Want some? Nah, you’re all good; I had a feed at mine. Six girls are playing touch in the middle pool, waist-deep, their legs thrashing and the water pooling over the sides, nobody having scored a try, the game practically impossible to win. A young mum splashes a toddler in the paddling pool, the toddler giggling away as he pours tiny buckets of water over his own head, his Finding Nemo nappy sagging, a size too big.

The young boy leaps, the muscles in his thighs tensing and twisting as he lifts from the handrail, his league shorts (let’s go Warriors) soaked through and glued to his skin, his whole frame sailing up, his hands – the empty water bottle – reaching for the heavens, his face stoic, he’s done this before; in truth, today is his first day back since the last time he did it. This is the only rule the lifeguard here upholds: a three-day ban for anybody caught doing bombs – she calls manus bombs – from either the handrail or the wooden bench. Too many accidents, she reckons, too many pretty children rushed off in ambulances. The boys think she’s lying. And they’re right. Pātea is small, anytime an ambulance leaves this place the whole town knows before the end of the day. This was true even before Facebook, the community page, before the senior busybodies here learned the intricacies of social media.

The lifeguard charges 50 cents at the gate: rumour has it the pools are public and nobody should be charging nothing. Everybody’s heard this, because of course everybody has, but nobody knows for sure. This doesn’t stop the crowds from coming, paying, 50 cents placed either in the lifeguard’s hand or the sliced lid of an old ice cream container, the fancy kind, Tip Top, cookies and cream. A couple of water-rats live next door, stay just over a grey tin fence at the top of the steps. They show up every day, no matter the weather, sun shining or rain raining, and never pay, always jumping that grey tin thing when nobody’s looking. The lifeguard must know, she must, they’ve done it too many times when the pool is quiet, when they’re the only ones there. Maybe it’s sympathy that stops her from calling them out or maybe she can’t be bothered kicking up a fuss over a 50-cent coin those water-rats surely don’t have.

None but the young boy’s mates and a few less-than-subtle admirers watch him soar through the air. Everybody else has seen it before – too many times to count. This is most true of those drying-off-on-the-concrete man-boys who have long graduated to doing bombs off the bridge when the tide is in; a sight that never fails to inspire uncertainty and fear and relief and awe. The young boy manus from the rusted handrails mostly as an act of rebellion, for the thrill of breaking the one rule you’re not allowed to break and the risk of getting banned again and the props he gets from his peers and the girls. The latter is mostly imaginary: the girls too clever to cheer the boy for something as unremarkable as disobeying the local lifeguard, a distant relation to many of them, a cousin or an aunty or a nan.

The boys’ changing room is plastered with shorts and towels and hoodies and schoolbags and singlets, none of which hang on the steel hooks lining the weathered timber walls; the girls’ changing room is much the same plus or minus the odd bra or bikini top. The toilets are steel and have no lids and the shower runs cold and the soap dispensers have long stopped dispensing soap. It’s all a mess really. Not that any of the boys and girls here mind. Keeps the rich kids away, they reckon. Let them have Hāwera. This one’s ours.

For a moment, the young boy is floating, hanging as if in pause, as if time has stopped to adore him, body long, his hands still stretched to the heavens, ready to fold as gravity rips him back to the earth, to the wavering pool of water he means to displace, to send toward the late sun, that celestial thing that dared burn him the last time he was here, three days ago. Waves of admiration and envy wash over his mates. That boy’s got hops, aye. I could manu way bigger than him if I could jump that high. This one will be mean as. His arms pull down and his elbows tuck to his ribs and his hands come over his chest, palms facing each other, nursed gently around the lip of the empty water bottle, his legs lifting and his body folding into a v.

All the boys here wear the OG skuxx cut, dark hair with long streaks of yellow (sometimes orange), a sort of hood mullet, long on the top and back and short on the sides, straightened and styled with Dax Wax whenever it’s dry. Nobody knows who started it, they all just had it one day. The same is true of the side ratty: a longer-than-the-rest strip of hair braided and kept together using either a hair tie or a jelly bracelet – double points if they were borrowed from a sister or a cousin or a crush.

The young boy breaks the water with the base of his back, his body folded tight, his knees kissing his chest, his legs ready to kick out, his whole figure opening, his grip loosening, the pool shooting up in a jet of water – he is truly the son of Tangaroa – the empty water bottle shooting up with it, clearing the top of the spotlights. Far out. Chur. Told you it’d be mean; Pohū’s always been the man at manus. The bottle dances in the air, flipping and turning and catching the breeze, then comes down hard, narrowly missing the heads of the teenage boys not watching on. They don’t budge. The darling little girl surfaces with a larger-than-life smile. That sounded like a bomb (hey, maybe that’s why Nan calls them that, she thinks to herself).

The lifeguard appears from out of nowhere, the lookout forgetting his job in the hype of it all. She stands over the edge of the pool and grabs the young boy by his ears and pulls him from the water. These things just for decoration, boy? Bloody hell. Can’t look away for one second without you water-rats doing something silly. How many times have I told you ‘bout the kid who cracked his head open bombing off those rails? Jesus Christ boy. Go on, grab your gears, you know the drill.

The teenagers shake their heads and the group of girls looking on try to hide their smiles and his mates crack up laughing, holding their stomachs, almost crying. The young boy rubs his ear and asks if it was big. It sounded massive, the darling little girl replies. Shot, Sis; catch you at home. And you too, Nan, he says winking at the lifeguard. You’re a bloody nuisance, she reckons.

Next week’s short story is “Sunset on Mars”, a science-fiction story by Gina Cole