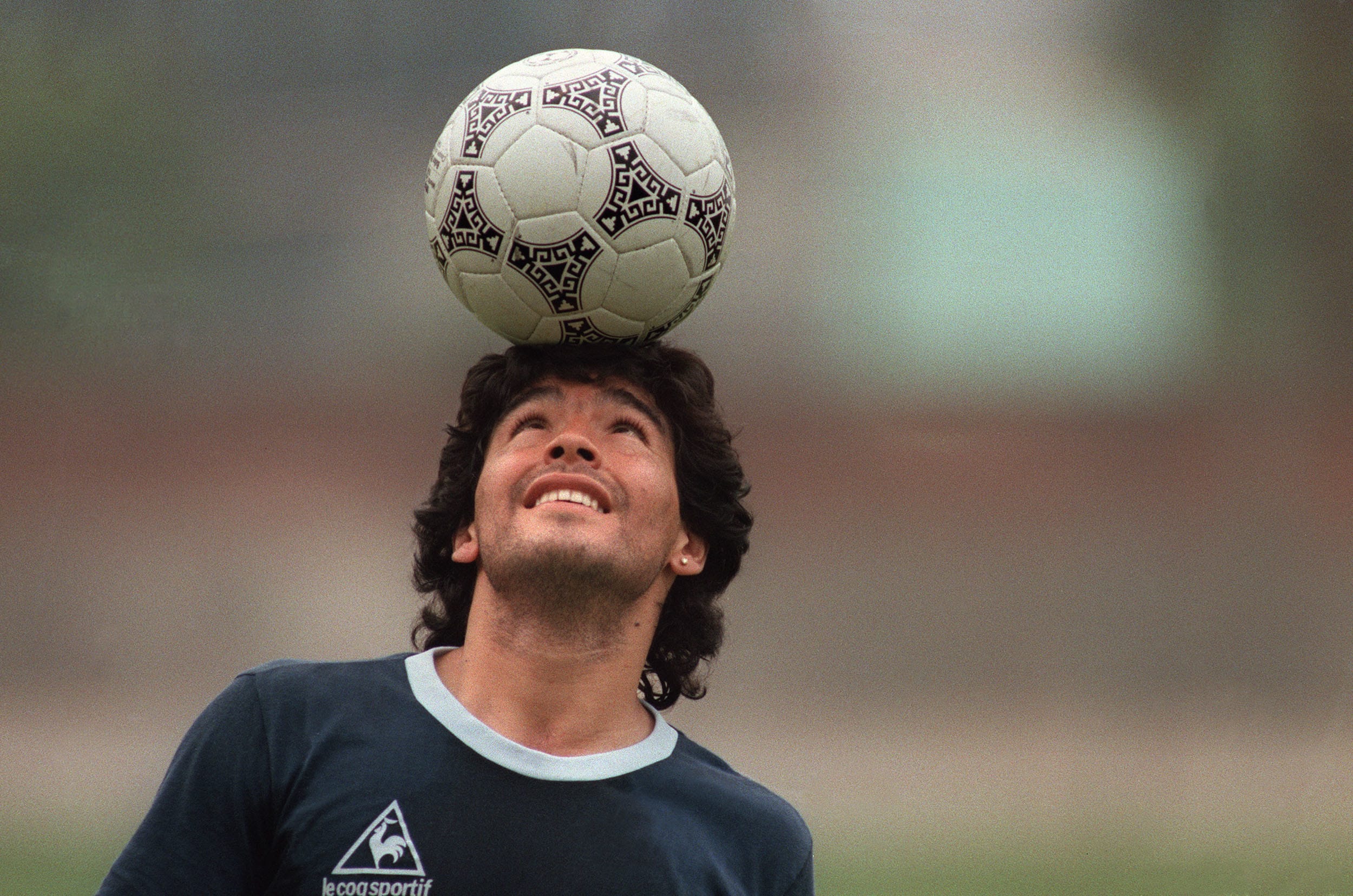 A short story about Diego Maradona (1960-2020), by Leonardo Guzzo, and translated into English by Alessandra Giorgioni. The story was inspired by a mesmerising YouTube video of Maradona when he arrived to play in Naples.

The beaten earth of the pitch no longer absorbs water. It becomes a bog after a little rain and it stays wet for days: a sickly grey muddy mess that no sun can really heal.

At the Acerra football pitch the car park is nothing but dirt. There’s been no grass for ten years now: the wheels of a hundred cars – big flashy cars and clunkers – have turned it into Atilla’s battleground. They are parked randomly around the pitch, in lines and circles, as if attempting to usurp the land. The cars of cocky club presidents, downgraded coaches, players who had to put their dreams on hold, blue collar wages and a piercing clamor of the Azteca stadium in their head.

The players dive into the changing rooms, cursing the mud and come out dressed in bright red betting on how long it will take for them to get dirty. They enter the pitch, if you can call it that, and the pitch is just an extension of the car park: same old dirt – beaten down in the box and mounded up around the goals –, patches of grass on both sides, proof that grass still manages to grow. There is no trace of grass however in the car park (that’s why they call it “the car park”) yet this is where the most unlikely event in the world unfolds.

For the last 15 minutes, a team in blue has been warming up in a circle. In the cold, under the leaden sky, they perform a ritual with great professionalism. Two tall men, a goalkeeper dressed in a dark jersey, six of average height, three bald men, three short and two with curly hair. The shirt is just ever so slightly altered: for an informal game they can’t wear the official match sky-blue. But the way they are training, the toned muscles and the shiny new boots leave no doubt.

Faces that nobody recognises. Old legends and reserves: two tall, three bald, three short, two with curly hair. No. One with curly hair and… the Idol.

You rub your eyes and count again. One tall and bald, one short, one average and curly haired and… the Idol.

He moves with the grace of a dancer, the precision of a violinist tuning his instrument. Tall he is not, he is not handsome but he glows: under a nest of curls is a faultless image of power. A paragon of perfection. Perfect as a sphere. He drops to his knees and then explodes upward, he bends and twists, loosening his muscles, his legs and joints, stretching out his arms. And already this is a show in itself.

A silent intuition, which wins out over all other distractions, begins to draw the spectators. A hope against all odds, and then an unbelievable truth, spreading quickly by word of mouth, as extraordinary as it is inexplicable. Acerra is Pulcinella’s hometown. The town of “pyroclastic ruins”, the volcanic flows which turn to black earth as they touch the ground. The ground scarred by cinders. A town of badly dressed people in camel overcoats and children looking like miniature adults, paraded around as if they were little saints sent out to collect money like shameless angels.

On the stands, which in fact is only one stand among the state houses and construction sites, there is a crowd of about ten thousand. There are too many. Those that don’t fit, pile up behind the home goal, trying to spot Maradona’s face as he runs forward.

They rub their eyes in disbelief. They look to the children to try to make sense of it all. It seems like the start of a fantastical dream, a fable made up by a small town journalist; instead it is entirely true.

The Idol comes on to the pitch. He poses for the ritual photos, kisses children, waves at the crowd. He never smiles.

He looks around and lowers his head. Glances briefly around.

He breathes and stomps his feet, testing out the pitch.

He slips, misses a pass and returns to the midfield dejected. He leaves his opponents behind and delivers a wonderful pass to allow the easiest goal in the world.

“You alone!”, shout the intruders as they sneak down onto the sidelines, “You alone!” It doesn’t matter that the reds are home team, that the black and green goalkeeper feels the despair that any goalkeeper would.

He cheekily plays about on the wing, drives two players crazy, he lobs the ball to the centre forward who passes it back, he scores with a flying kick and falls to the ground on his arse. He ends up in the mud. He’s annoyed. He frowns. Maybe no, slowly he begins to understand why he is there. His face has the shadow of one who needs to atone.

Atone for the night life and the attentions of the groupies who see to his every need; atone for the vices which make a mockery of the simple ignorance of his childhood pitches in Lanus.

He ran off overseas leaving his conscience behind. In this moment, he begins to understand. In the muffled lap of suspicion, he’s playing another game.

An hour and a half of rapture. The Idol dances in the mud and is covered with a different kind of dirt. He keeps afloat by the force of his legs and yet his heart is locked in a drifting hold. For all the others he’s a back-up sun.

It is drizzling. The crowd yells and chants. They dance under the rain like Pulcinella himself. Then the referee, hunched over like an accountant, blows the final whistle. The players return to the changing rooms: that is, they cross behind the goal and through the flower beds into a concrete shed. It’s likely there will be no hot water but nobody has the guts to admit it.

A man in camel overcoat moves closer to the number nine in the blue shirt, and mutters in his ear, under the mass of curly wet hair. “Twenty million”, he whispers excitedly. For the poor little boy and his delicate operation, twenty million. They laugh.

But the Idol doesn’t laugh. He brushes against people, accepts hugs and pushes on past them; he needs fresh air, space. From his home on a cloud he has descended down to re-experience hell.

His butt hurts from the impact of the hard ground. He puffs his chest out and is a child again, in the outskirts of Buenos Aires. He goes to get some fresh air, and thinks about the beaten pitch that no longer absorbs the water, the leather-like, hopeless disillusion.

No sun, they say, can heal it.