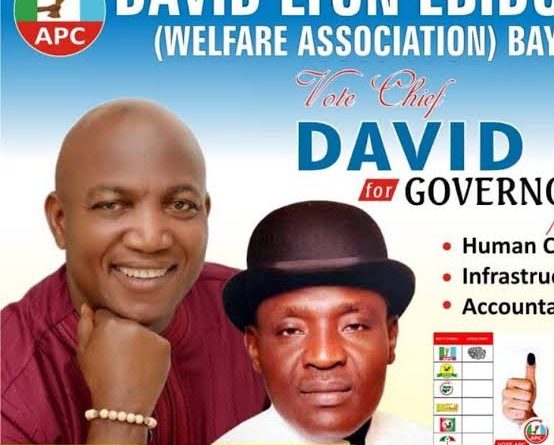 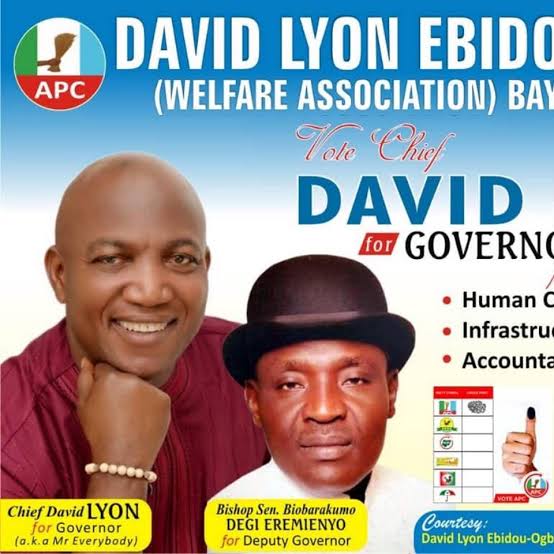 A valid explanation why the Supreme court nullified the election of David Lyon who won the Bayelsa governorship election has been given.

It was gathered that the different names traceable to the APC Deputy Governor in Bayelsa led to Supreme Court disqualification of the governor.

He bore these names at different stages of his life.

Mr Degi-Eremienyo’s name was written as Degi Biobara in his primary school certificate.

The documents from his secondary education bore Adegi Biobarakumo, as his name.

While that of his university education had Degi Biobarakuma as his name.

Also his MBA certificate had Degi Biobarakuma Wangaha as the name of the same person.

As the Deputy Governor-Elect he bore

The Supreme Court on Thursday sacked David Lyon and Sen. Biobarakuma Degi-Eremienyo, as the governor and deputy elect in the Nov. 16, 2019 Bayelsa governorship election.

Justice Ejembi Eko, who delivered the lead judgment reinstated the Nov. 12, 2019, Judgment of the Federal High Court in Abuja that disqualified Degi-Eremieoyo from participating in the governorship poll.

The court held that the trial court was right in finding the deputy guilty of presenting false information to INEC.

The Justice Mary Odili-led panel, held that no person shall be qualified to contest election if he presented false information for the purpose of election.

The apex court ordered that the certificate of return be withdrawn immediately from the governor and his deputy and be issued to the candidate with the second highest votes in the Nov. 16, 2019 election.

The apex court held that the nomination form Degi-Eremieoyo submitted to INEC for the purpose of the Nov. 16, 2019, governorship election in the state, contained false information of fundamental nature.

The People’s Democratic Party (PDP) had asked the court to regard the discrepancies in Degi-Eremienyo’s certificates as major impediments to his candidacy.

They accused the All Progressives Congress (APC) running mate of providing different names at all levels of his education.

Also, the result from his MBA certificate had Degi Biobarakuma Wangaha as the name of the same person.

The Court of Appeal in Abuja had dismissed the PDP’s case and affirmed the candidacy of the deputy governor-elect in the Nov. 16, 2019 governorship election in the state.

The judgment set aside the Nov. 12, 2019 verdict of Justice Inyang Ekwo of the Federal High Court in Abuja disqualifying Degi-Eremieoyo as the APC’s deputy governorship candidate in the poll.

The Appellate court held that the Federal High Court judge erred in his decision disqualifying the APC’s deputy governorship candidate.

It held that there were not enough grounds for the Federal High Court to rule the way it did, adding that the allegation that Degi-Eremienyo gave false information to INEC was not proved as required.

It faulted the lower court’s reliance on Section 31(5 and 6) of the Electoral Act in disqualifying the APC’s deputy governorship candidate.

The court added that the allegations against Degi-Eremienyo were criminal in nature which required proof beyond reasonable doubt.

It said that the different names contained in the appellant’s Form CF 001, his First School Leaving Certificate and General Certificate of Education belonged to the same person, going by the supporting affidavit of change of name and newspaper publication.

The appellate court therefore set aside the Federal High Court’s judgment, and awarded N500, 000 cost against the respondents in favour of the appellants.

The Federal High Court had in its judgment held that Degi-Eremienyo gave false information to INEC about his academic qualifications allegedly evidenced by the discrepancies in the names contained in his credentials.

The APC’s candidate was said to have claimed to have obtained “his First School Leaving Certificate in 1976” and presented to INEC “a First Leaving School Certificate of one Degi Biobaragha other than the one bearing his name Biobaragha Degi-Eremieoyo as shown in his INEC Form CF001.”

He was also said to have claimed to have “obtained his West African Examinations Council General Certificate of Education in 1984” and presented to INEC, “a GCE certificate of one Adegi Bibakuo other than the one bearing his name Biobarakuma Degi-Eremieoyo as shown in his INEC Form CF001.”

Justice Ekwo held that there was no evidence to prove that the documents with different name variations were his.

He ruled, “I further hold that the information given by the 3rd defendant on Form CF.001 that the documents thereto attached as his have not by any iota of credible evidence been so established.

“The information is false in all material particular as none of the said documents have any nexus with the name of the 3rd defendant (Degi-Eremienyo) on the said Form CF001.”

The judge went on to make a declaration “that the information which the 3rd defendant submitted to the 2nd defendant in his INEC Form CF001, that, affidavit in support of personal particulars of person seeking election to the office of the Deputy Governor of Bayelsa State is false contrary to section 31(5) of the 2010 Electoral Act (as amended).” (NAN)