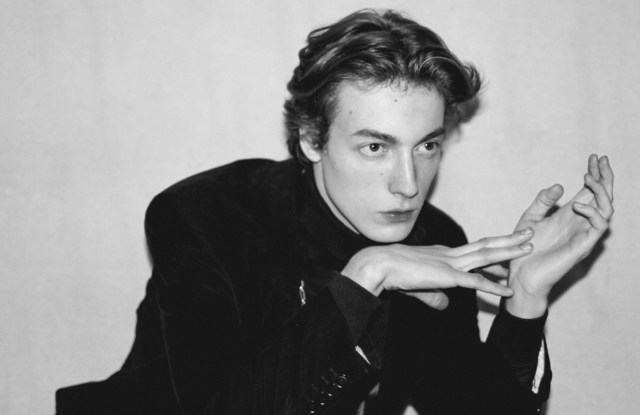 Fresh off his debut at Paris Couture Week last month, de Vilmorin, known for his colorful paintings tinged with darkness, will be in charge of designing women’s ready-to-wear at Rochas, with his first collection set to bow for spring 2022.

Rochas parent company Interparfums SA said it has signed an extension of its partnership for women’s rtw with HIM Co SpA — High Italian Manufacturing, the company previously known as Onward Luxury Group, which changed hands in December.

“Audacity, elegance, timelessness and originality are the foundation of the Rochas legacy,” Philippe Benacin, chairman and chief executive officer of Interparfums SA, said in a statement.

“These are also values that define the work of Charles de Vilmorin, creating perfect synergy between our two worlds. Charles’ youth, talent and touch of wildness will give Rochas new life for years to come. We are delighted to have Charles participate in this new era for our brand,” he added.

De Vilmorin noted he has been familiar with the Rochas brand from a young age — his great-aunt, French novelist Louise de Vilmorin, knew Hélène Rochas, the widow of founder Marcel Rochas, who drove the international expansion of the company’s perfume empire after his death.

“Rochas is a brand that holds a special place in my heart, due to both deep personal family ties and the label’s heritage, which I find so rich and inspiring,” de Vilmorin said. “I can’t wait to bring my personal touch and reinterpret the codes of this beautiful maison.”

Having graduated from the Ecole de la Chambre Syndicale de la Couture Parisienne in 2019, the French designer received a windfall when an anonymous benefactor snapped up his graduate collection. He used the money to fund his debut collection in April 2020: a line of patchwork quilted bomber jackets inspired by artist Niki de Saint Phalle.

With their oversize proportions, and vibrant patterns incorporating eyes, hearts and lips, his designs felt like an antidote to the ambient gloom and were lapped up by the fashion community. De Vilmorin was one of 15 independent and emerging young designers selected by Gucci’s creative director Alessandro Michele to participate in the GucciFest online festival in November.

De Vilmorin told WWD he looked forward to taking the reins at Rochas while continuing to expand his fledgling label. A short video released to reveal his appointment showed him painting the Rochas name on white sheets of paper pinned to a wall.

“This is a dream come true. It’s what I’ve always wanted to do, so I feel mentally prepared,” he said. “Right now, I’m running my brand solo, so it’s a little challenging to do everything, but that’s going to change. I’m going to bring on people. But I’m very happy and excited about it. It gives me a huge boost and it’s very stimulating.”

While he considers his eponymous couture line a more experimental endeavor, he’s looking forward to working within the framework of a historic house and has already started plunging into the archives of Rochas, which was founded in 1925.

“It’s one of the oldest French houses, so it has a very beautiful heritage. I identify with a lot of the codes: there were a lot of prints and big volumes,” he noted. “They want me to do something very visual and creative, something daring and new, to really bring a new approach to the brand in fashion terms.”

Fabio Ducci, CEO of HIM Co., said: “We are honored to announce the extension of our partnership with Interparfums, and are delighted to be embarking with Rochas on such a fundamental part of its new journey. We would like to warmly welcome Charles de Vilmorin as the new creative director, and look forward to giving him all the support he needs to achieve every success.”

Rochas has been without a head designer since parting ways with Alessandro Dell’Acqua, who showed his last collection for the label in February 2020. During his six-year tenure, the Italian designer updated the brand’s couture heritage with his signature mix of glamorous embellishment and graphic tailoring.

Interparfums bought the Rochas fashion and fragrance activity from Procter & Gamble Co. in 2015 for $108 million.

Rochas was under the creative direction of Marco Zanini from 2008 to 2013 and Olivier Theyskens from 2002 to 2006, when the fashion line was momentarily shuttered.

De Vilmorin likes to work with a close group of friends that includes singers, dancers and his best friend Anaelle Postollec, a makeup artist and influencer who has her own YouTube channel, and said he wants them to be a part of his future projects.

He also has close ties to the world of music. Lou Doillon tapped de Vilmorin to design a dress and helm the video for her single “Look at Me Now,” and he has created outfits for singers Laurie Darmon and Charlotte Le Bon as well.

Emerging Designer Charles de Vilmorin Has No Time to Waste