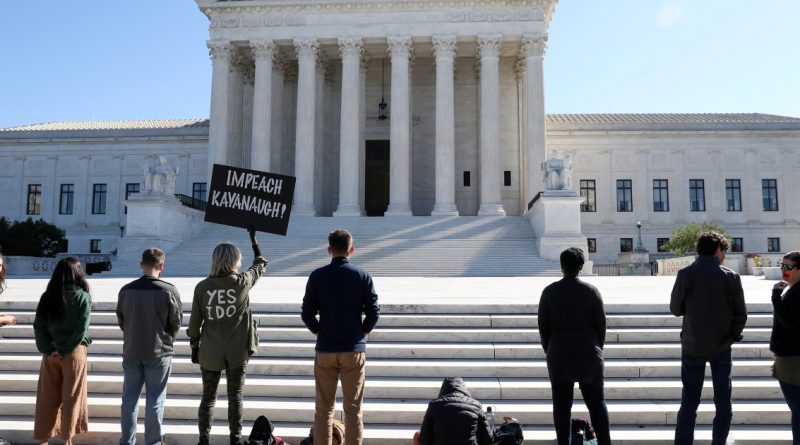 The Supreme Court of the United States began its new term Monday with a remembrance of “a dear friend and a treasured colleague,” the late Justice Ruth Bader Ginsburg.

Chief Justice John Roberts paid tribute to Ginsburg, who died last month, as the court resumed its work via telephone because of the coronavirus pandemic.

The justices are beginning a new term with Republicans on the cusp of realising a dream 50 years in the making: a solid conservative majority that might roll back abortion rights, expand gun rights and shrink the power of government.

It also is a most unusual, politically fraught moment in US history. The justices are still mourning the death of Ginsburg, the leader of the court’s liberal wing. They are working in the midst of a pandemic that has forced the court to drastically change the way it conducts business. And the presidential election is less than a month away.

Roberts said the justices would hold a fuller memorial service for Ginsburg once they return to the courtroom.

President Donald Trump’s nominee for Ginsburg’s seat, Judge Amy Coney Barrett, could be on the bench in time for one of the term’s biggest cases – post-Election Day arguments in the latest Republican bid to strike down the Affordable Care Act, which provides more than 20 million people with health insurance.

Barrett’s confirmation would cement a 6-3 conservative majority and diminish Roberts’s ability to moderate the court’s decisions. That is because conservatives would have five votes even in cases where Roberts might side with the remaining three liberal justices.

“I would guess that on the whole we’re going to see a considerable and perhaps quite rapid shift to the right,” said Orin Kerr, a law professor at the University of California, Berkeley.

Senate Majority Leader Mitch McConnell reiterated on Saturday that Barrett’s confirmation hearings, due to begin October 12, will proceed as planned even though two Republicans on the Judiciary Committee have contracted the coronavirus. Trump himself remained hospitalised with COVID-19 on Monday.

The only time Ginsburg’s colleagues, masked and remaining at some distance from each other, gathered in person since March, when the court was closed to the public, was for her memorial service in the court’s Great Hall.

“I’m still trying to get my head around the idea that Justice Ginsburg won’t be on the bench any longer,” said Donald Verrilli, who was the top lawyer before the Supreme Court during the administration of President Barack Obama and who will argue in the health law case in November.

The justices began hearing arguments in the new term’s first case, which centred on a system used by the state of Delaware that requires some of its courts to be ideologically balanced. The justices were hearing the state’s appeal defending its law, which requires that no more than half of the judges on certain benches can be affiliated with one political party.

The second case was a dispute between Texas and New Mexico over rights to the waters of the Pecos River that runs through both states.

On Wednesday, the justices weigh a multibillion-dollar software copyright dispute between Alphabet Inc’s Google and Oracle Corp. The case involves Oracle’s accusation that Google infringed on its software copyrights to build the Android operating system used in smartphones.

On November 10, a week after Election Day, the court is due to hear arguments in a case in which a group of Democratic-led states including California and New York are striving to preserve the 2010 Affordable Care Act, better known as Obamacare. Republican-led states and Trump’s administration are waging a court battle to strike down the legislation.

Obamacare has helped roughly 20 million Americans obtain medical insurance either through government programmes or through policies from private insurers made available in Obamacare marketplaces. It also bars insurers from refusing to cover people with pre-existing medical conditions. Republican opponents have called the law an unwarranted intervention by government in health insurance markets.

The Supreme Court previously upheld it 5-4 decision in a 2012 ruling in which conservative Chief Justice Roberts cast the crucial vote. It rejected another challenge by a vote of 6-3 in 2015. Ginsburg was in the majority both times. Barrett has criticised both rulings.

The court hears another major case on November 4 concerning the scope of religious-rights exemptions to certain federal laws. The dispute arose from Philadelphia’s decision to bar a local Roman Catholic entity from participating in the Democratic-governed city’s foster-care programme because the organisation prohibits same-sex couples from serving as foster parents.

In December, the justices will decide whether the House of Representatives can obtain grand jury materials that were part of Special Counsel Robert Mueller’s investigation of Russian interference in the 2016 election.

It is among several cases that could go away – or at least look very different – if Democrat Joe Biden wins the election.

One other possibility next year is a retirement, especially if Biden wins and Democrats retake the Senate. Justice Stephen Breyer is now the court’s oldest justice, at age 82.

Both he and Ginsburg rebuffed suggestions that they retire the last time Democrats controlled the Senate and the White House, in 2014.