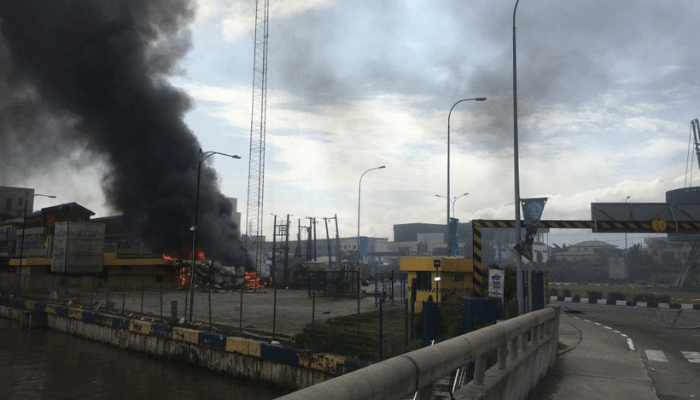 They spend hours in traffic, traverse the same location, sell the same goods alongside several others. This is the daily routine of hawkers in Lagos who, whatever the weather, walk and haggle on their stomping ground in search of their daily income. `

This common sight highlights two things: the tenacity it takes to do business in Africa’s largest city and the how traffic congestion stunts the growth of small businesses. The rebuilding Lagos after the pandemic and plunder must give more attention infrastructure that decongests traffic and eases the connection of businesses to markets. It takes a can-do mentality to thrive as a business in Lagos. A doggedness that the yearlong pandemic and the destruction took place after protests in October will test further.

The supermarkets, phone shops and restaurants that lost millions of naira to looting and vandalization last month are examples of small businesses in Lagos, most are in the wholesale and retail sector. In Nigeria, more than half (55%) of micro-, small and medium enterprises (MSMEs) are in wholesale and retail trade.
And Lagos is the capital of MSMEs. Of the 41.5 million MSMEs in the country, Lagos has the highest: 8,395 small and medium enterprises and over 3 million micro-enterprises.

Micro-enterprises employ 10 or less people. And unlike the SMEs that lost millions of naira they account for over half (73%) of small businesses in Nigeria. From hairdressers to app developers, from welders to film makers they are small and informal. Most are self-employed i.e. the only employee of the business. Such businesses, because they are unregistered, are unlikely to benefit from the loans the Lagos State Employment Trust Fund began to offer to SMEs days after the looting and vandalization. What Lagos plans to spend on infrastructure in 2021 may be of more help.

One third (N311.43bn) of the N1.15 trillion budgeted for 2021 will be spent on infrastructure. Part of it will be used to rebuild public property destroyed after the peaceful EndSARS protests turned violent. This is consistent with what we found in our yet to be published report on Connectivity and Productivity in Lagos: the state has spent on average 38 percent of its budget on infrastructure. Still, traffic congestion remains a problem.

The physical growth of cities coincides with better standards of living. As people and economic activity concentrate within a location it boosts consumption and production, jobs, and productivity.
As cities expand so should jobs, particularly in tradable sectors like manufacturing where returns to expanding employment are highest. In 2010, small and medium manufacturers accounted for 15 percent of jobs in Lagos (545,000); wholesale and retail trade, which falls under the non-tradable sector, employed twice as many people (1.2 million).

Too many businesses in Lagos are small and informal (like hawking) and therefore less likely to expand. They are neither big nor efficient enough, they are unable to reap the benefits of scale, scope, specialisation and competitiveness because Lagos is congested, fragmented and disconnected Lagos.
In other words, they are trapped into low-productivity activities because of poor transport network. These same constraints deter investment capital, limit business expansion and constrain their capacity to provide jobs for the growing population of Lagos. All of which stymie economic growth.

Poor connectivity is a barrier to trade within and outside Lagos. It disconnects SMEs from local and regional markets, fragments the market and restricts small businesses to a location, like hawkers who are local champions within a fixed territory. Goods are moved mainly by road in Lagos (and Nigeria). The roads are thus choked, overburdened, in bad shape, increasing the time and cost it takes to import or export. A World Bank survey found that Lagos loses $2.8 billion in productivity yearly due to traffic congestion, approximately 3.5 percent of its GDP.

This disconnect between people and markets, also referred to as fragmentation, frustrates economic concentration of activities in Lagos. Poor and expensive transport increases production costs in tradable sectors, a barrier to expansion beyond local markets.
For instance, though these businesses account for most of the jobs in Nigeria and contribute half of the gross domestic product many are concentrated in sectors that hardly export their finished goods or services; they contributed 7.64 percent to exports in 2017.

As Nigeria relies less on oil its cities will be the engines of growth reckons a 2016 World Bank report, From Oil to Cities: Nigeria’s Next Transformation. Between 1990 and 2014, Nigeria has shifted from its dependence on commodities, especially oil, as a share of its economy and major contributor to growth. Non-oil sectors like services, wholesale and retail trade and ICT now drive economic growth. Intrepid entrepreneurs, investors and workers made this growth possible despite the common challenges of doing business in cities like Lagos. Still, it has not generated jobs.

Hawkers haggling in traffic congestion every day is hardly a sign that Lagos is making the most of urbanisation. Connect people and markets must improve if Lagos is to see a rise in productivity, wages and formal sector employment. A well-connected Lagos with a multimodal transport system together with its large concentration of people and SMEs can provide that employment opportunity.