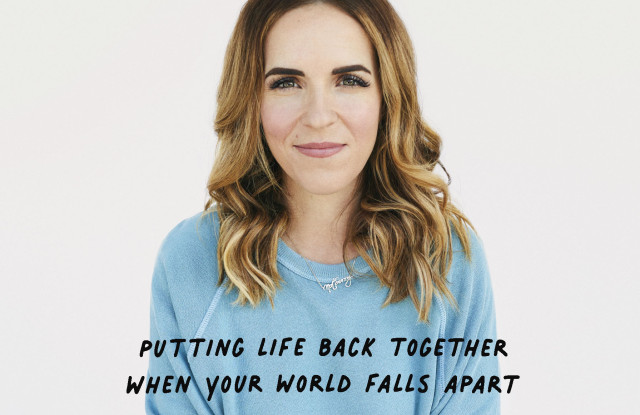 
When Rachel Hollis and her team went into lockdown in March, they were at work on edits for what was supposed to be her big release of 2020, the third in her “Girl” series that made her a self-help star, titled “Girl, What the Health?” But as the realities of the pandemic set in, the process felt disingenuous to the motivational writer and speaker.

“It feels like to bring out a book in 2020 and not talk about the world we’re all living in, just feels like a miss,” Hollis says over the phone from her home office in Austin, Tex. “So I reached out to the publisher and I was like, ‘Hey, I don’t even know what it would be, but if I could really find a way to write about the world that we’re all living in, could we get it out this year, is that even possible?’ I honestly didn’t even know what I would write. I just kind of sat down and started working through what I was grappling with at the time and then went from there.”

What came together instead is “Didn’t See That Coming: Putting Life Back Together When Your World Falls Apart.” It’s a meditation on grief, loss and difficult periods in life, obviously directly in response to the global hardships felt by the coronavirus pandemic — but also by the dissolution of Hollis’ marriage, which came as a shock to her many loyal readers and fans.

“I didn’t want to make the book about that, but I knew that I had to speak on it. Because to create a book about grief and crisis and loss, and then have it come out and not mention one of the greatest pieces of grief in my life would feel disingenuous,” Hollis says. “So writing it was hard and editing it was even harder. But yeah, it’s sort of this like, ‘Hey, let’s call this what it is and let’s acknowledge where we’re at and see where we can go from here.’”

The book gets right to it and opens with the line “Three days into editing this book, my marriage ended.” Hollis says she wasn’t nervous to have her fans read about the dissolution of her marriage or even newer audiences — it was her husband she was most apprehensive about.

“I get this question a lot from people who are writers or who dream of writing their own book, they want to know how do they tell their own story without hurting the people in their lives. And I think it’s a really fine line that you have to walk,” Hollis says. “And so if I was experiencing nerves, that was more about wanting to put something out in the world that I felt like it was being truthful, but also doing it in a way that was respectful of him.”

Despite having released books of a personal nature before, Hollis, who is known for her “Girl, Wash Your Face” and “Girl, Stop Apologizing” books, says this time feels different.

“I think I feel a little bit of trepidation. It’s one thing to do press when you’re talking about a book that has humor and levity and all of those things, but there’s a lot of hard subjects in this book,” Hollis says. “I’m excited for the book to be out there. I always create in the hopes that it’s going to help somebody, even if it just helps a small group of people. But I do feel a little trepidation having to kind of dig into the hard stuff in order to let people know that it’s there.”

Hollis says in correspondence with her online community during the pandemic, she’s saddened to see the amount of shame and blame women place on themselves for not handling things better right now — and that is what drove her to get a conversation started.

“[Women say] ‘I started drinking more than I wanted to,’ or ‘I’ve put on weight’ or ‘I stopped going to therapy’ or ‘I haven’t been the mom that I want to be.’ There are these extreme factors above and beyond the fact that we, as a global society, are inside of this pandemic. And people are mad at themselves for not doing it better,” Hollis says. “And it’s so hurtful because nobody, not even the freaking government, knows how to handle things. Why would you, third grade teacher, know how to do this? It’s so unfair.”

Her intention with the book is to allow women to recognize these expectations placed on themselves as unrealistic, and feel a bit of peace by being able to have discussions around what it looks like to struggle, as Hollis puts it.

“You have to allow yourself this time and you have to move at your own pace, and maybe we take a little bit of the pressure off of needing to have it all perfectly formulated, because nobody does,” she says. “All we can ever do is our best. And our best right now may look very different than our best did in January.”

Earlier this year, Hollis was met with criticism for posting a Maya Angelou quote on her Instagram without attributing it to Angelou, making it appear that she had said the words herself. It caused blowback in the deep history of white women taking claim for the work of Black women, and Hollis issued an apology. (She says the post did not come from her but from a young staff member on her team.)

“I’m very cognizant of how upsetting that was to people, and rightfully so. Because how many times have Black artists had the words or their work stolen by other people, particularly white people?” she says. “I fully own that it was hurtful and that all you can do when something like that happens is to try and do better. And that’s when I wrote about it and I just said like, ‘Hey, I own that this happened, this is my company. It happened on my watch. And you’ll see us do better.’ And I’m going to get it wrong. I would so much rather keep trying to show up and keep trying to do my best and get it wrong than to sort of publish the perfect press release to explain the situation, but then you never see anything change. And so, yeah, that whole situation was awful, but it was awful not because of how it felt to me, but because there were people who were deeply hurt by it, who felt like I was the one hurting them and that’s devastating. So we are doing better. And if you see something on social, it’s from me. So if it’s wrong, then OK, I’ll admit, I’m the one who put it up.”

Looking ahead, Hollis says she is hopeful that people are taking lessons out of 2020 and not just closing their eyes and hoping for time to pass.

“The thing that I keep hearing right now is everyone’s, ‘Oh, 2020, 2020, I can’t wait until 2020 is over.’ I’m like, ‘Do you think that the problems that we have as a society, the problems that you have as an individual, the pain in your life, do you think that at midnight on Dec. 31 that goes away?’” she says. “No. This is our life. This is what it looks like for the foreseeable future. And all we can do is the best that we can do with what we’ve got. So I really hope that people cling to that and we finish this year strong instead of whimper out of it.”