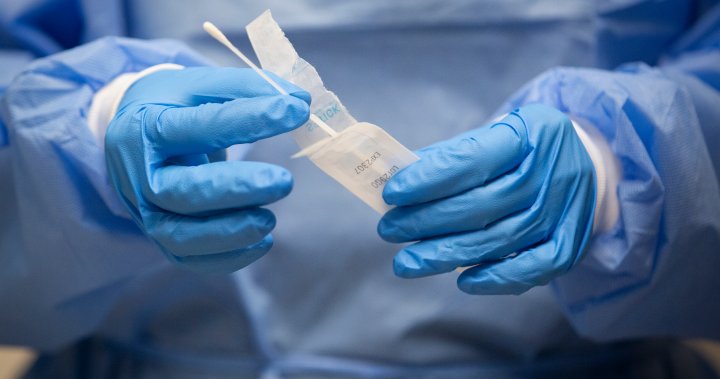 Hamilton’s medical officer of health says the city is still trying to work out how thousands of polymerase chain reaction (PCR) tests, made available by the province, will fit into a testing program amid a return to class during the COVID-19 pandemic.

On Tuesday, Dr. Elizabeth Richardson said the rollout by public health will likely be through a third-party vendor chosen by the province. However, she was unable to confirm the specifics of how the relationship would work.

“We are interested in bringing it to groups that have not otherwise got access to testing and helping us to understand when we are dismissing cohorts and then the specifics of that,” Richardson said.

“We’re still trying to work out with the vendor around what they can do, what their capacity is.”

Ontario earmarked $64.5 million for health and safety costs in the latest school reopening initiatives and committed to sending 25,000 PCR tests – exams using swabs inserted into a person’s nose or throat – to Hamilton and a number of other health regions.

“It was PCR testing done on a rapid test, nasal pharyngeal swab, and the swab was analyzed locally at Health Sciences North,” McNair told Global News.

McNair was not sure how many swabs were processed from the mobile clinics and said there have been no results since the tests are still being processed at a local laboratory.

“So we do plan to give an update soon,” McNair said.

“We at this point are working with our partners, and with our local school board to determine when and whether or not testing is needed locally moving outside of this pilot project.”

The province began its first venture into asymptomatic testing in late 2020 at 63 schools in regions that had the highest numbers of COVID-19 cases, including Toronto, Peel, York and Ottawa.

“Through these cases, we found that under two per cent of all student cases came back positive,” said Lecce.

“And the majority of those positive cases were found outside of the school.”

However, a number of school boards are still at a loss when it comes to understanding the ministry’s rollout of asymptomatic testing in the reopening, according to the president of the Ontario Secondary School Teachers’ Federation (OSSTF), Harvey Bischof.

Bischof told Global News that Sudbury’s public school board has not been involved “whatsoever” in a testing program.

Rainbow District School Board chair Doreen Dewar confirmed to Global News that despite making a request for testing, the ministry has not yet reached out.

“Rainbow District School Board sent a letter to the minister of education requesting the immediate implementation of asymptomatic surveillance testing within Rainbow Schools,” said Dewar.

“We also advised our local health unit of our desire to have this testing done. No plan of implementation has been developed at this time.”

Richardson says an active discussion is continuing with the province on the role and types of test that might be used in a future school program, including rapid tests like the Abbott ID Now COVID-19 test and rapid antigen tests.

“So that’s primarily where we’re looking at using it in terms of helping us understand transmission in schools,” Richardson said.

“It might help us where we’re able to screen a few more kids in the case of those dismissed cohorts.”