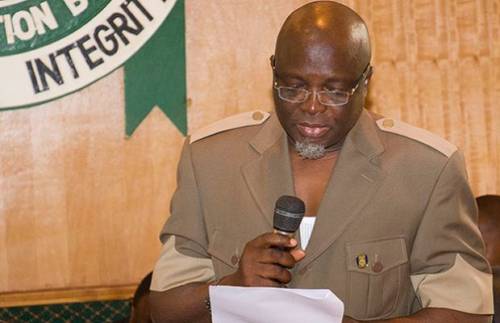 President of the Computer-Based Test Centres Proprietors Association in Nigeria, Maxwell Akwuruoha, has alleged that the Registrar of the Joint Admission and Matriculation Board has an intention to undermine CBT operators to build its mega centres across the country.

Speaking to SaharaReporters on the delisting of 22 CBT centres by the examination board, Akwuruoha said the JAMB registrar, Ishaq Oloyede, decided to blame test centre owners for an intentional glitch created by the developer of the CBT web application, Sidmach Technologies.

Oloyede had in a Zoom meeting on August 27, proscribed 22 CBT centres, vowing that they would never operate as long as he remained the Registrar of JAMB.

Some of the CBT operators said the old version was not disabled and the updated version was incompatible with the operating systems installed on the computers in their centres.

The trouble arose from an overcharge of the candidates by the centres.

If candidates want to make any corrections on their JAMB profile, a payment of N2,671 must be made to the Treasury Single Account through Remita. After that, the candidates are given a one-time password which is used to log-in to the board’s portal to effect the change.

The Use of an OTP was introduced by JAMB during the COVID-19 lockdown to stop students from bombarding the CBT centres to use the biometric process.

The delisted centres were accused of bypassing the use of this password and charging the students as much as N5,000 for a process which they were licensed to charge N200 only.

Akwuruoha and other CBT operators, however, told SaharaReporters that Sidmach made two software updates available simultaneously with a new version that required OTP and an older version that did not.

Akwuruoha said rather than address why Sidmach would create a backdoor that made it possible for the candidates to access their profile without OTP, the CBT operators were outlawed for trying to help desperate youth striving not to miss the screening deadline for their preferred universities.

“The registrar is too ambitious to destroy the private sector that has made their CBT project work,” Akwuruoha said. “He is using the billions he has exploited from CBT operators to build his mega centres.”

Akwuruoha blamed few Shylock CBT operators for overcharging the candidates but pointed out that over 90 per cent of the centres collected between N3,000 and N3,500, including the payment to the Federal Government.

“NO CBT centre operator would overcharge a candidate when he or she knows they could forfeit their license,” he said, adding that operators had to cover the cost of operation.

Recalling the incident that led to the August 27 Zoom meeting, Akwuruoha said after the JAMB exams, Sidmach upgraded the CBT software from version 4.2 to version 4.9.

“When you are trying to use the new software to make a correction, it will ask you for OTP,” he said. “Sidmach intentionally failed to disable the old software which does not require OTP. I say this because, in ICT protocol, you don’t update the software to solve a problem and leave the old one running.”

Realising that the old software was still functioning, the CBT operators said they believed that JAMB was aware of every action taken at the backend and the OTP innovation was not essential after all.

They said students were at this point scrambling to make changes to their tertiary institutions of choice or change courses. Many of them had misplaced the sim card used to register for the JAMB exam and could not receive access to the OTP after making the necessary payments.

For some, the passwords never came in, the CBT operators said. The ICT centre owners said they acted as the closest representatives to JAMB and had to make on-the-spot decisions.

But some of the centre owners tried to cash in on the mistake by Sidmach. “I saw adverts of people saying, ‘if you want to make corrections with OTP, DM me,’” one operator who did not want to be named said.

Akwuruoha said when he saw the challenges posed by the OTP innovation, he brought it to the attention of JAMB, asking the exam body to increase the channels the students could use to access the passkey. “I heard a boy asked his girlfriend to bring N3,000 to show her the OTP because she used his sim,” a CBT operator who chose to stay anonymous said, underscoring the pressure they faced at the time.

One of the CBT centre operators, who attended the August 27 Zoom meeting, said a delisted centre operator who showed proof that he had raised a ticket complaining of the hurdles caused by the update was not spared.

Akwuruoha wondered why Sidmach was absolved of the problem. “What we notice is that when Sidmach proffers a solution, they create a backdoor for them to keep making money. We keep records. Sidmach is behind the failure of the scratch card system that forced JAMB to start using pin vending.”

A spokesperson for JAMB, Fabian Benjamin, said the CBT operators intentionally circumvented the laid down process instituted by the board.

“You are a partner in progress. You should be able to know what is inimical to the agency you are partnering with,” Benjamin said.

Different sources say once a system installs the CBT software developed by Sidmach, a unique ID is given to the computer. This allows JAMB to record the capacity of a CBT centre and flag if a new system is added.

Benjamin said in a bid to avoid measures like these, some CBT owners put their systems offline at the point of installation. He said some of the centres “had the intention of committing fraud.”

He, however, agreed that Sidmach should be blamed for not detecting the criminal intent of some of the operators. “At the meeting we held with them, all of them accepted that they were at fault.”

When told that one of the accused raised a ticket, he said, “He didn’t show the code given to him when he raised the ticket. If he indeed raised a ticket, we appreciate him for that, but one does not report a robbery and go ahead to partake.”

A CBT operator at the meeting claimed that Oloyede failed to allow each accused person to explain what happened.

Reacting to reports that certain candidates failed to receive their OTP, with some having to wait for 48 hours, Benjamin said they were all instructed to turn-off the ‘do not disturb’ feature on their line.

“Once they disable ‘do not disturb,’ they get the password immediately. If they still fail to get it, we tell them to raise a ticket.”

He countered the claims by Akwuruoha on sim cards.

“You use your sim card to do almost all transactions. Sim cards are more secure than emails. Putting the password on the profile of the candidates can allow third parties to have access to the password,” he said.

Benjamin said JAMB was thorough in its investigation before delisting the centres, adding that some affected candidates were interviewed, and undercover techniques were used to uncover the centres.