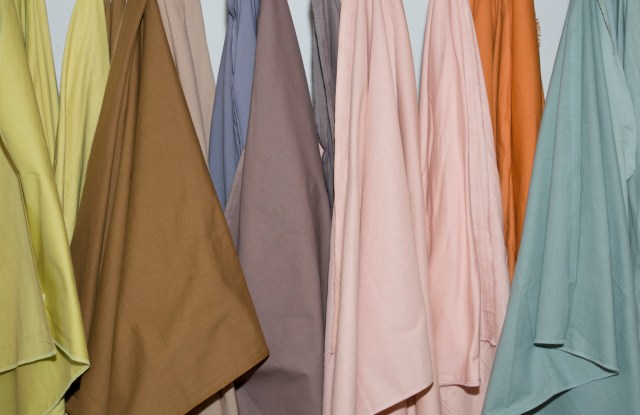 
PARIS — Keeping calm and carrying on, despite all the coronavirus disruption — which has scuppered hopes of meeting in person — Première Vision is holding its second digital-only gathering.

Stretched out over a week this time, the trade show will focus on spring 2022, bringing together buyers, suppliers and other industry players, from Feb. 15 to 19. Speakers include designers Charaf Tajer of Casablanca and Emily Bode, who will explain how the pandemic crisis has changed their businesses, while Arizona Muse will join a session about sustainability efforts.

Organizers were lucky to have prepared digital platforms before the virus struck.

“Since 2018, we have begun building our platform with the idea of bringing people together throughout the year as the numbers of collections grew,” said Gilles Lasbordes, general manager of Première Vision. Lasbordes explained that the idea was to offer exhibitors the means to keep in contact with buyers beyond the organized visits.

“It turned out that this tool took on a whole new dimension when physical meetings were halted,” said Lasbordes, referring to the arrival of the coronavirus.

In September, organizers had prepared for a hybrid show, with in-person and online meetings — content was split between online and physical meetings. But following the summer, coronavirus cases surged and the French government revisited its restrictions, and ruled against large gatherings. With no letup in the health crisis, meetings remain banned.

“Here we are again, in a situation wherein we are not allowed to hold physical meetings — the spaces where they would be held are closed — so we prepared a complete digital edition,” explained Lasbordes.

While the show is organized in a similar manner as the one held in September, the platform has evolved.

Première Vision has decided to bring together everything under one website, regrouping the previously separate sites for the denim and New York shows, for example.

“We thought it wasn’t so easily readable for a community that has to meet online much more frequently and to channel flows — in order to offer a simpler, more fluid experience, we decided to progressively bring together all the internet sites under one platform,” said Lasbordes.

The digital show will feed the site. The first day of the show, organizers will upload a series of articles describing trends for the season, with product illustrations, organized by theme — and listed in the “Magazine” section. The forum includes products selected by the fashion team, with a “connect” option that allows buyers to link up with suppliers.

“We have a new page for each of our exhibitors that is easier to read, offering a more immersive experience, with the option of organizing a WhatsApp meeting directly,” Lasbordes explained.

Webinars are posted from the first day of the show, and available throughout the week.

Organizers realized that during the September show, buyers were visiting the site a few days before the official date and lingering afterward, so they decided to distribute the content over a week.

“There was a constant flow throughout the week, so we decided it was easier for buyers to spread out their visit,” he said, noting the amount of content was likely the same as the last show, which lasted two days, just stretched out over a longer time.

“There are a lot of new things on the site — you’ve got what you need to build your season,” he said, explaining that the Première Vision teams had photographed around 2,500 products.

“We asked for samples from our exhibitors, they sent their collections, we selected certain products, and loaded up the Première Vision team’s selection,” he said, ticking off a list of products — threads, fabrics, leather, accessories. Some are featured in the online catalogue, while others fit into the thematic articles about the season’s trends.

Asked about the quality and amount of products produced during this disrupted time, Lasbordes responded positively.

“We received a lot of collections — in the current context, we wondered if there would be investment in creation, this was our big question,” he said. “And the answer is a real ‘yes.’ We did receive fewer collections than usual, it’s not surprising given the context where certain companies have slowed down, some are not very digitally minded and do not want to take part, but we got a lot of collections from big and small companies and creation is really happening,” he said.

“There is a feeling of renewal, with plenty for buyers to work with for the coming season, to find areas to explore, to make contact with suppliers, and to go further in building their collections,” he added.

While it is too early to tell what buyers will be focusing on this season, there is clearly interest in where things are produced, in sustainability, in social responsibility commitments from companies, noted the executive.

“These aspects are being mixed into the creativity process,” he said, noting the use of more primary materials with better environmental credentials, like certificates and labels.

Industrial actors are increasingly researching how to improve the sustainability of their processes, and earn certifications, he noted.

Creative approaches are also geared more toward sustainability, he added.

“We can see that the demand from buyers, and brands for sustainability, it’s there and it is strong,” he said.

A number of labels have said they are focusing on streamlining collections and focusing on well-established designs, while introducing newness through different materials, but the executive said it is too early to see if this has led to an increased focus on fabrics.

“I don’t have elements to confirm this yet, but I’m sure that if we enter a phase where the number of collections and the size of collections is reduced, there will be, on the part of buyers, a deeper focus on the materials, rather than just seeking to fill out the collections,” he said.

Less risk-taking in terms of cuts could lead to more pressure on the choice of materials, further reinforcing the emphasis on sustainable materials, suggested Lasbordes.

“I think we are entering a period in which we will be both creative and sustainable — it’s not about making concessions when it comes to creativity, making more simple products — I don’t think that works anymore,” he said.

In this context, companies will have to double up efforts to ensure that primary materials have an ecological bent, and use organic cotton rather than conventional cotton, for example, or recycled polyester.

“This is more of a sourcing approach on the part of the suppliers taking sustainable aspects of materials into account,” he added.

When it comes to the international nature of the show, participants are mostly European and American — not being offered in Asian languages makes it difficult for Chinese, Japanese and Koreans to take part.

Organizers understand that participants are eager to meet in person, and plan to work toward a physical show in Paris come fall, with the show scheduled for Sept. 21 to 23. The following year, they plan to resume the show’s July slot, in person.

Over the week, webinars will include talks on the feel of fabrics, color trends and seasonal influences, led by Première Vision’s fashion teams, in addition to designer talks.