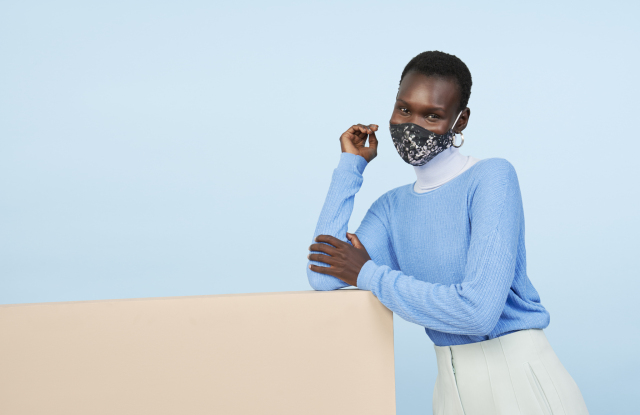 Prabal Gurung is trying to empower the masses through a new venture with Walmart’s e-commerce site.

The designer’s new Impower brand is meant to relay “I am power“ and masks will be the first products. Debuting online today, the $14 items will have a charitable component. The Centers for Disease Control Foundation will be the donation recipient for the debut collection. All donations made to its Coronavirus Emergency Response Fund are used for medical supplies, increasing lab capacity, supporting vulnerable communities and other pandemic-related needs. Gurung noted that when the crisis took hold earlier this year, his company helped to organize an initial donation of 5,000 N95 masks to hospitals in underserved areas.

“My goal is product and conversation. We can no longer look at fashion just in the way it was. We have to understand we are building communities. We are addressing the current climate and also future ones,” Gurung said in an interview.

Aware that there is a great divide in the U.S. between mask wearers and non-wearers, Gurung said, “Right now showing up means wearing a mask to keep you and your community safe. It also means speaking up for what’s right, joining in the fight for racial justice and voting in the upcoming election. Wearing a mask shows the rest of the world that you care about your health and safety and those around you.”

The initial donation to the CDC Foundation is $35,000.

Gurung, who owns the Impower brand, will be leveraging his social media channels to promote the @impowerus Instagram account, where all the Impower brand’s content will live. With a second line already in the works for the holiday that will include fashion accessories, the designer intends to expand Impower into other categories like home decor.

Although today’s U.S. launch is on the retailer’s site, the designer hopes to have it carried in Walmart stores as well. Walmart’s reach as the world’s largest retailer with distribution in 27 countries appealed to Gurung, who set out “to reach as many people as possible.” Partnering strategically with other retailers to access new markets is part of the long range plan, he said.

A Walmart spokesman acknowledged an interview request, but provided no comment.

Emphasizing the importance of having substance and style together, Gurung said brands have to stand for something. “Now what we choose to wear, what we do, what masks we wear and who makes it says a lot about you,“ he said. “In 10 years as a brand, I think I’ve shown up with my own body of work back in Nepal [philanthropically] and here also through my advocacy and activism.”

The Nepalese-American designer has spoken about the importance of inclusivity, diversity and domestic production for years. The designer said he was talking about issues related to race, gender, body image, age and sexual orientation “before it was cool to do so.” In 2011, he started the Shikshya Foundation Nepal to help provide a sound education to underprivileged children in his homeland. Four years later, he helped to raise money to assist those affected by the 7.9 magnitude earthquake in Nepal. From his standpoint, “Impower is a socially conscious lifestyle brand that focuses on intention, action and hope. It is a democratized collection across demographics and markets with the mission to empower and inspire by drawing on the strength and brilliance within,“ he said.

With consumer engagement and data collection top-of-mind for so many companies, Gurung acknowledged that his strong social media following was a big draw for Walmart. “Our conversation with them is pretty much that. Yes, there’s a presence. There is a name recognition. There is engagement. I have amassed very active followers across my multiple channels of communication. But I think what also proved true to them is what the Impower brand stands for. Also, historically, this is not something that I just came into. I’ve been doing this kind of work for a long time.”

He added, “I want to remind everyone that their voices, their actions and their contributions matter — no matter what age, race, gender or sexual orientation that you identify with. We all have the power to make a change in the world. I want to activate important conversations around global issues.”

In regards to Walmart‘s potential plans to take a stake in and commercial agreements with TikTok Global, Gurung said, “They are on the pulse of what’s happening recently from TikTok to their social justice initiatives.”

As for why Gurung decided to work with Walmart, he said he was impressed by how the retailer mobilized during the pandemic, such as drive-thru COVID-19 testing and give-back programs. “It’s also an opportunity for me to work with another audience and activate a new community,” he said.

Impower is being produced by Olivet International, a 40-year-old privately held company that specializes in cut-and-sew development and manufacturing. A spokeswoman for Gurung declined to comment about who or which company is financing the manufacturing, and what expectations are for first-year projected wholesale volume. The designer described Olivet as “a natural partner for Impower, as the two companies’ core values are aligned: sustainability, made in the USA and female empowerment.”

Sen. Kamala Harris (D-Calif.), the Democratic vice president candidate, delivered her message of empowerment at the Democratic National Convention last month wearing a Prabal Gurung pantsuit. The designer declined comment, when asked if he would be would be dressing her for the upcoming debates.

Having earned his right to vote in 2016, the designer — like many of his peers in the U.S. and American brands — is trying to help get out the vote. Gurung released a $115 Vote T-shirt with 15 percent of proceeds benefiting When We All Vote.

As for whether the $14 price tag for Impower’s masks is too steep for Walmart shoppers, Gurung said the mask not only protects the wearer, and those around them, but it also has a give-back component. The latter allows people of different means to contribute philanthropically, not just those who are accustomed to donating sizable sums, Gurung said. While many believe in making tons of money and then giving back, the designer said “giving doesn’t necessarily have to be large sums or small sums. It needs to be something that comes from your heart.”

This is not Gurung’s first venture into the mass market. He has collaborated with Target and Lane Bryant in the past. Regarding Walmart, he said, “This is an opportunity to talk to a different audience and activate a new community. I look at myself as a storyteller and healer. If they check out my work, they can see the body of work and the things that I have stood up for.”