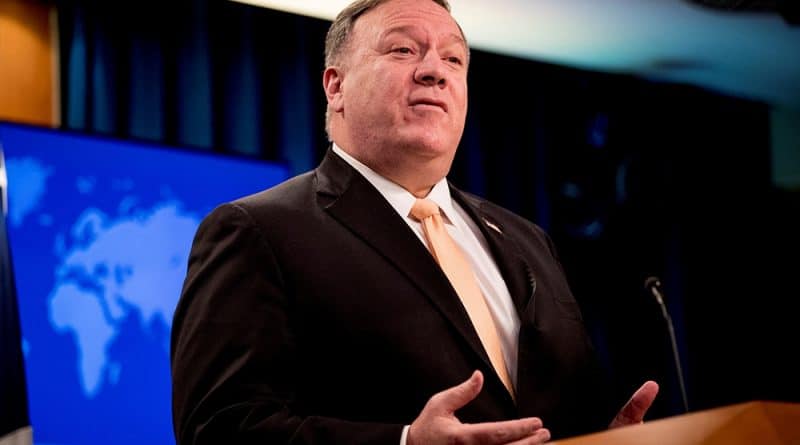 International
May 27, 2020May 27, 2020 Stan 0 Comments
LinkedInFacebookTweetPin
LiveChat will greatly increase the number of your satisfied customers. I've already tried it and I can recommend it as a go-to customer service tool! Sign up today for a free trial!

United States Secretary of State Mike Pompeo has notified the US Congress that the Trump administration no longer regards Hong Kong as autonomous from mainland China.

Wednesday’s notification to lawmakers sets the stage for the US to withdraw preferential trade and financial status that the former British colony has enjoyed since it reverted to Chinese rule in 1997.

“Hong Kong does not continue to warrant treatment under United States laws in the same manner as US laws were applied to Hong Kong before July 1997,” Pompeo said in a statement.

Pompeo’s certification to Congress was not accompanied by a revocation of any specific privileges. But it comes amid calls for the US and others to react against Beijing’s move to impose Chinese national security laws over the territory.

China’s parliament is expected to approve a proposed security law that would reduce Hong Kong’s separate legal status on Thursday. The legislation is aimed at tackling secession, subversion and “terrorist” activities in the city.

“Beijing’s disastrous decision is only the latest in a series of actions that fundamentally undermine Hong Kong’s autonomy and freedoms and China’s own promises to the Hong Kong people,” Pompeo said on Wednesday. He said “no reasonable person can assert today that Hong Kong maintains a high degree of autonomy from China, given facts on the ground.”

Relations between the US and China have worsened over US allegations that Chinese authorities sought to cover up the coronavirus pandemic and pressured the World Health Organization against taking early action to combat it. That has added to long-standing tensions over trade, human rights, religious freedom and the status of Taiwan.

On Tuesday, US President Donald Trump said the US was working on a strong response to China’s planned national security legislation for Hong Kong and it would be announced before the end of the week.

At a White House news briefing, Trump was asked if he planned sanctions against China over Hong Kong and if he intended to put restrictions on visas for students and researchers from China.

“We’re doing something now. I think you’ll find it very interesting … I’ll be talking about it over the next couple of days,” he replied.

Pressed about whether this would include sanctions, he said: “No, it’s something you’re going to be hearing about … before the end of the week, very powerfully I think.”

Trump did not elaborate. 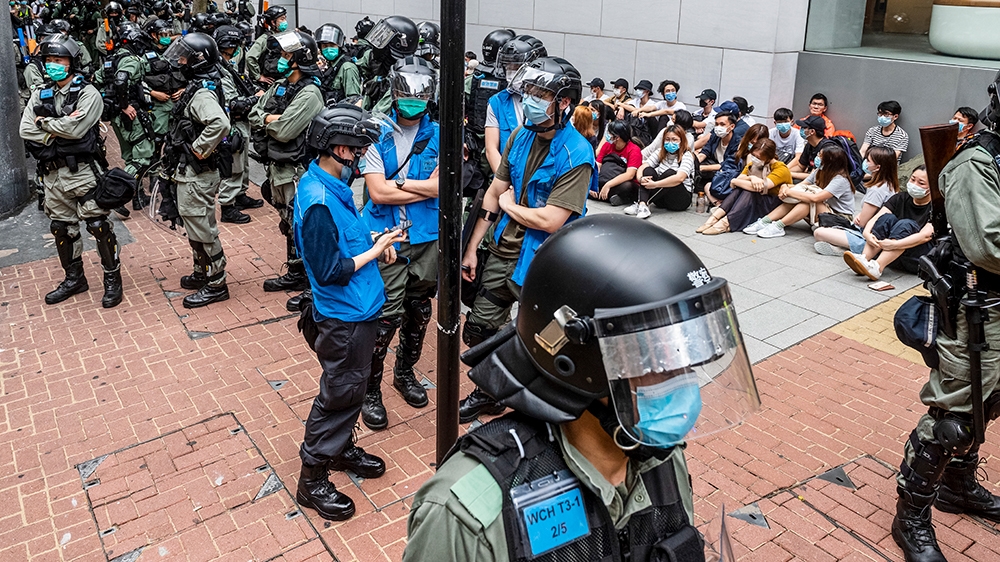 A large group of detainees seen sitting on the ground as police set up a cordon around the area in Causeway Bay, Hong Kong during a protest against a controversial Chinese anthem law and the proposed security law [Miguel Candela/EPA]

China responded to Trump’s comments with a warning it would retaliate against any new measures.

“We will not accept any foreign interference, and to the wrong actions of outside powers in interfering in Hong Kong, we will take necessary countermeasures to hit back,” foreign ministry spokesman Zhao Lijian told a regular briefing.

Chinese authorities and the Beijing-backed government in Hong Kong say there is no threat to the city’s high degree of autonomy and the new security law would be tightly focused.

Earlier on Wednesday, Hong Kong police fired pepper pellets to disperse protesters as hundreds of people gathered in the centre of the financial hub to oppose a controversial bill on China’s national anthem and the proposed national security law.

Pompeo’s certification to Congress on Wednesday was required by the Hong Kong Human Rights and Democracy Act, which passed overwhelmingly with bipartisan support last year. The law requires the US to impose sanctions against officials held responsible for human rights abuses in Hong Kong as well as determine whether the city continues to warrant special status.

David Stilwell, the State Department’s assistant secretary for the region, accused Beijing of using the coronavirus pandemic to accelerate a global political agenda, including on Hong Kong.

In a briefing for journalists on Wednesday, Stilwell declined to detail the US response, which he said was for Trump to decide, but said it would be targeted and aim to mitigate the impact on the Hong Kong people and US businesses.

Trump’s economic adviser, Larry Kudlow, has said Washington would welcome back any US companies from Hong Kong or China’s mainland. “We will do what we can for full expensing and pay the cost of moving if they return their supply chains and their production to the United States,” he said.

Trump administration officials and lawmakers have been exploring ways to encourage US firms to move supply chains for critical products back to the US from China amid steadily worsening ties and bitter recriminations over the coronavirus pandemic, which began in China.

The US Chamber of Commerce business lobby urged Beijing to de-escalate the situation, saying it would be “a serious mistake” to jeopardise Hong Kong’s special status.