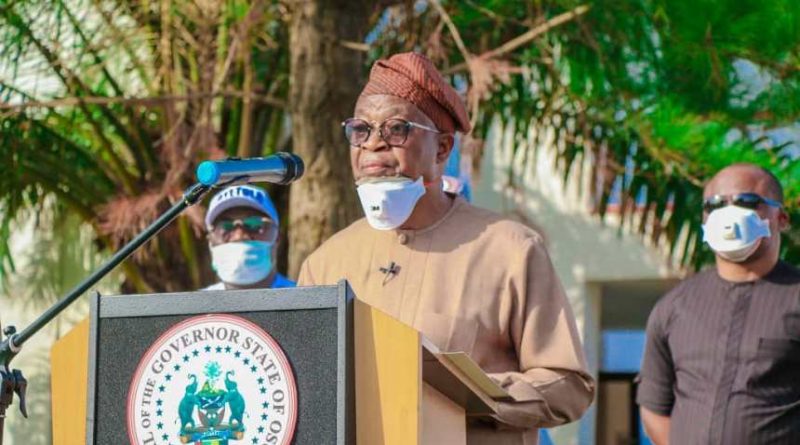 Osun State Governor, Mr Adegboyega Oyetola has disclosed that his attackers at the #EndSARS protest on Saturday were hired political thugs and not youth protesting against police brutality in the State Capital.

This is as the Governor also denied that his convoy killed two persons during the attack unleashed on his convoy saying one the victims had been involved in an accident around 12:30pm, while the other one was said to have died at Ayepe area of the town.

Governor Oyetola in a statewide broadcast on Sunday said youths in the state had been protesting peacefully against police brutality before the process was hijacked by hoodlums and political thugs.

The statement reads, “Yesterday evening (Saturday), political thugs and hoodlums made failed attempts on my life and those of my aides while identifying with our beloved youths who were engaging in legitimate protest against the alleged brutality of the now disbanded  Special Anti-Robbery Squad (SARS).

“My entourage and I joined protesters from Alekuwodo area to Olaiya Junction chanting solidarity songs with them and encouraging them along the way. During the course of my address to the protesters to reiterate our cooperation and support, political thugs hijacked the exercise and hurled stones and dangerous weapons at us and vandalised several cars in my convoy.

“Preliminary investigation revealed that the commando style with which the assailants carried out their attack was deliberate and pre-planned. It was also evident that it was not the genuine protesters that carried out the violence.

“Preliminary investigation further revealed that no live bullet or cannister of teargas was fired at the rampaging political thugs. Therefore, no life was lost at the scene of the incident. I was properly evacuated to safety.

“Regrettably, two lives were reportedly lost yesterday. But none occcured during the attack on me. One of the said deaths which was caused by a lone motorcycle accident occurred around 12noon, long before I got to the protest ground.

“The second death was said to have occurred around Ayepe, about 5 kilometers away from Olaiya where we held the protest.

“We sympathise with the families of the deceased and pray to God to grant them the fortitude to bear the great losses.

“I have directed that the incidents be properly investigated with a view to ascertaining the causes of the deaths.

“By this week, we shall be setting up a Judicial Panel of Enquiry in line with the directive of Vice President Yemi Osinbajo to investigate all related cases of abuse and brutality by the disbanded SARS. This panel will also investigate yesterday’s attack.

“What happened on Saturday is objectionable, unacceptable and a blight to the Omoluabi ethos that the State of Osun stands for.

“Attempt on the life of the governor cannot be planned by the youths who constituted over 60 per cent of the voters that elected us into office and had embarked on successful and peaceful road walks with us several times in the past.

“Osun youths who are the original #EndSARS protesters have travelled the long road of building a better Osun with us and we have been on the lane of delivering a better and prosperous Osun together. This assassination attempt could not have come from them.

“Our Administration had identified with the youths from Day One of the protest in the belief that protest is a legitimate right of the citizenry and a core component of democracy.

“On the day one of the protest, Senior Government Officials were at the Nelson Mandela Freedom Park to identify with and address the protesters.

“These Senior Officers of the Government also addressed them at the Gate of the State Secretariat, Abere, on the fourth day to identify with the protesters, pledge our solidarity to their cause and promise to deliver their demands to the President. Those demands have since been met by Mr President.

The protesters had engaged in peaceful demonstration for the first two days before it was later hijacked in the last five days. In fact, we had cause to raise the alarm last Wednesday to the effect that the protest had been hijacked.

Again, earlier Saturday, our party, the All Progressives Congress, did raise another alarm that identified political thugs were seen brandishing dangerous weapons while following the protesters.

It is unfortunate that Saturday’s protest which started peacefully was allowed to degenerate into a violent exercise and a huge danger to the lives and property of the people that we are called out to protect. This is unacceptable.

As a responsible and responsive government, we will do everything within the ambit of the law to protect the lives and property of our people. All our citizens and residents are enjoined to be law abiding as any person found contravening the law shall be made to face the wrath of the law.

“We commit to the cause of our youths and the #EndSARS protesters and shall do everything to ensure that their demands are met. I enjoin all our citizens to be peaceful and to be law abiding as all efforts shall be made to protect them and their property.

Rest assured that we are on top of the situation.  We shall fish out the perpetrators of this dastardly act and bring them to justice.

“We shall not condone any act that will compromise the lives of our people and the hard-won ranking of our State as the most peaceful state in Nigeria.

”As a responsible government, we will do everything in our powers to protect the lives and property of our people”.