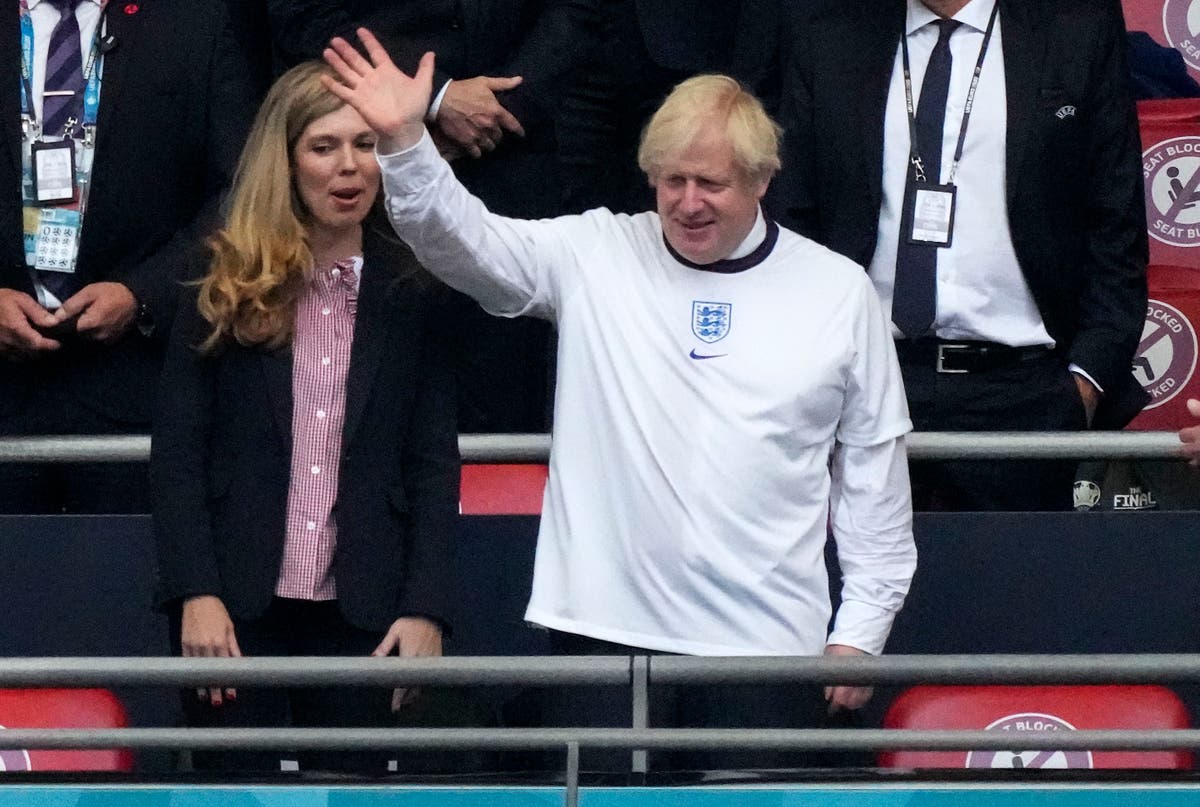 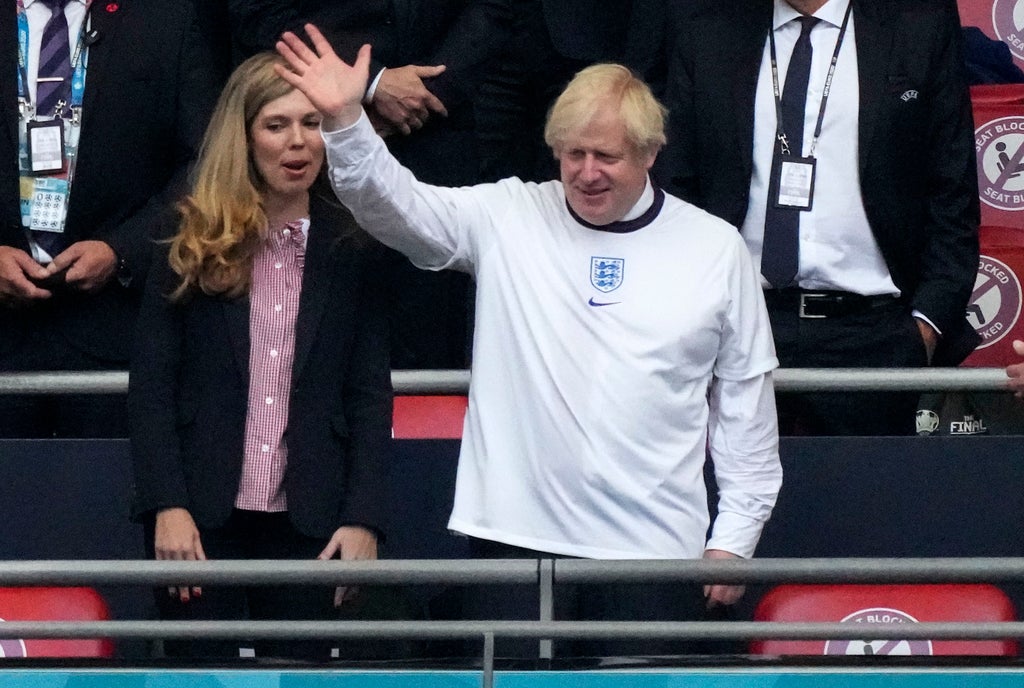 Boris Johnson has used a coronavirus briefing to denounce those sending racist abuse to England’s “heroic” footballers after the team’s loss to Italy in last night’s UEFA Euro final.

The prime minister begun the presser – in which he warned lockdown lifting on 19 July does not mean life going back to normal – by telling the nation he was “forlorn” about the final score while issuing a stark warning to online trolls.

“To those who have been directing racist abuse at some of the players, I say shame on you and I hope you will crawl back under the rock from which you emerged,” Mr Johnson said. “Because this entire team played like heroes and I’m sure that this is just the beginning of their achievements.”

It comes after a string of football icons, MPs and Peers called out the PM and his home secretary for failing to condemn fans who previously jeered England’s players for ‘taking the knee’ before matches.

Sayeeda Warsi, a Tory Peer, hit out at Priti Patel’s stand with England’s players. “Priti, we as govt, as Conservatives, need to think about our role in feeding this culture in our country,” she said in a tweet, adding: “If we ‘whistle’ & the ‘dog’ reacts we cant be shocked if it barks & bites.”

London’s mayor has branded isolated outbreaks of violence seen in the capital last night as “appalling” and “unacceptable”.

Sadiq Khan said the incidents – including hundreds of fans who broke into Wembley without tickets – was not “reflective of true fans, and has no place in our city”.

“The police and FA have my full support in taking action against anyone who is identified to have illegally forced their way into Wembley stadium or been behind the violent scenes witnessed after the match,” Mr Khan said.

“I’d like to pay tribute to our brave police officers – 19 of whom were injured when they confronted volatile crowds in central London. On behalf of all Londoners, I wish them a speedy recovery.”

So far 86 arrests have been made, the mayor revealed as he thanked the “overwhelming majority” of England and Italy fans who “watched the game and behaved in the spirit shown throughout the tournament”.

In a sign of support, Mr Khan tweeted the names of the three players facing racially fuelled abuse online – “Rashford, Saka and Sancho” – and called them the “three lions”.

Sketch: ‘England team has been let down by their political leaders’

Our political sketch writer Tom Peck has weighed in on the government’s failure to combat racism on and off the pitch.

“For these past few glorious weeks, all that has been said and typed over and over again about Gareth Southgate’s England 2.0 is that as a football team, they played unburdened by the neurotic failures of English football’s recent past. And as men, they deliberately fought to set a better example of what a footballer is than that which exists in the popular imagination.

When they chose to take the knee before their matches in a gesture of solidarity against racial inequality, they were booed by their own fans. That is nothing new. The England football team has always been a gathering place for various iterations of far right extremists and straightforward thugs.

They are outnumbered now, but by no means eliminated. What is new is that they would be so disgustingly let down by their own political leaders. Boris Johnson at first refused to condemn English fans booing their own players for anti-racism. The home secretary Priti Patel did the same. And now England’s footballers – principally Marcus Rashford, Jadon Sancho and Bukayo Saka – have received huge volumes of racist abuse online.”

Johnson again refuses to answer if would take the knee

Asked if, after condemning the racist abuse aimed at England players, he would now join footballers in taking the knee, Boris Johnson again refused to answer the question directly.

Telling a journalist he “didn’t hear a single boo myself” when he was at last night’s EUFA Euro final, the prime minister instead said: “I’ll say what I have said many times: people should be free to show their respect and show how much they condemn racism in this country in any way that they choose.”

Mr Johnson said last month no one should boo England players “for any reason” but has never explicitly said whether he would take the knee or not.

Continuing, the PM said it was “a shame” that a small minority behaved badly yesterday, but that he does not think it will scupper the UK/Ireland bid for the 2030 World Cup: “I do think the UK working with Ireland has a very good case.”

Boris Johnson has used a coronavirus briefing to hit out at England fans sending racist abuse to some of the team’s players.

The prime minister said he hoped those attacking Marcus Rashford, Jadon Sancho and Bukayo Saka online with racial slurs “crawl back under the rocks from which you emerged”.

He continued: “Because this entire team played like heroes and I’m sure that this is just the beginning of their achievements, and I say bring on Qatar next year, and let’s also dare to start, together with Ireland, how the United Kingdom can host the World Cup in 2030.”

Scotland’s government has been accused of exploiting “loopholes” in lobbying laws after reports surfaced of “hundreds” of meetings going unrecorded.

The Lobbying (Scotland) Act 2016 requires face-to-face meetings between ministers or advisers and outside groups to be registered by those who seek to lobby.

But calls made over the phone, or those instigated by ministers, do not have to be registered. Lobbying done via email or messaging apps such as WhatsApp are also not covered by the Act.

“Hundreds” of Holyrood meetings have been undertaken but not subsequently reported to the register, according to reports in the Herald newspaper.

Scottish Labour business manager Neil Bibby said the legislation should be “looked at”.

“These reports raise serious questions about whether Scotland’s lobbying laws are fit for purpose,” he said.

Opinion: ‘Don’t be surprised at the racist abuse of Saka – this is England’

Rupert Hawksley, our senior commissioning editor at Voices, has given his verdict on the “inevitable” racism spouted by some England fans.

“It was inevitable. This is England. We knew that, whatever happened on the pitch, some fans would shame us all. And so it proved to be. There was fighting throughout the day; a large crowd breached security and stormed into Wembley; parts of London have been trashed; and then, of course, the three England players who didn’t score their penalties are now being racially abused online. What a country.

You could argue that only a small minority of fans were involved, and that they don’t represent England, but you’d be lying to yourself. Thuggishness, entitlement and a total lack of care for others seem to be national traits now, and plenty of England fans take a lot of pride in that, too. We’re not all like that, perhaps, but let’s not seek solace there – for this is not really about individuals, rather a culture of intolerance that has seeped across the land.

Clearly not everyone would kick an Asian man in the head (as a number of England fans at Wembley did yesterday) or post a monkey emoji on Bukayo Saka’s social media pages. But we all exist in a society that has emboldened this sort of behaviour.”

But it said it was a matter for ministers to decide what action should be taken against Mr Cummings.

The Vote Leave supremo failed to seek advice from the the Advisory Committee on Business Appointments before launching a paid-for blog on Substack on which he has offered management consultancy services for payment, according to Acoba’s chair Eric Pickles.

Our political editor Andrew Woodcock has the full report:

A mural of England footballer Marcus Rashford, which was vandalised in the early hours of this morning with racist graffiti, has been covered in messages of love and support by locals.

Soap opera EastEnders will reference the Euro 2020 final in tonight’s episode, the BBC has said, with the scene first broadcast on BBC1 at 8.05pm.

It will then be “dropped into the BBC iPlayer episodes that went live this morning”, the broadcaster revealed.

“Although it’s only a small scene, with England’s performance in the Euros capturing the hearts of the nation over the past month it’s only right that the residents of Walford would be talking about last night’s historical match,” the show’s executive producer Jon Sen said.

Sarkozy’s conviction shows, at last, French presidents may no longer be above the law | Nicolas Sarkozy

Coronavirus: UK records another 3,398 cases and seven deaths – as it happened | World news