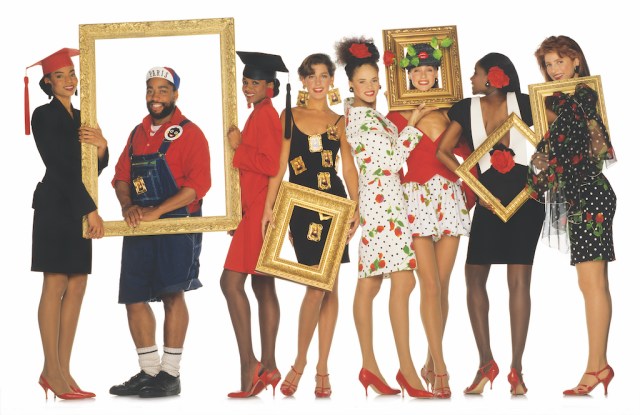 Pioneering Black designer Patrick Kelly, whose playful work addressed racial stereotypes head on, will be celebrated in a newly expanded exhibition opening Oct. 23 at the de Young Museum in San Francisco, putting his brand in context of today’s conversations about racism and gender identity.

“Patrick Kelly: Runway of Love” was originally organized by the Philadelphia Museum of Art in 2014, but has been expanded for its West Coast debut, which will coincide with the publication of the first book about the designer, with contributions by international scholars and critics, including André Leon Talley, as well as oral histories.

During his brief career in the 1980s, cut short by AIDS, Kelly became the first American and the first Black designer to be voted into the Chambre Syndicale du Pret-a-Porter des Couturiers et des Createurs de Mode, which allowed him to show during Paris Fashion Week. He moved to Paris in 1980 at the suggestion of Pat Cleveland, and Yves Saint Laurent chairman Pierre Bergé personally sponsored Kelly in 1988 to form the Paris-based women’s wear house Patrick Kelly Paris.

The exhibition will feature 80 fully accessorized ensembles, dating from 1984 to 1990, highlighting his inclusion of models of all races and sizes, as well as sketches and collages, and pieces from the designer’s controversial collection of racial-stereotyping Black memorabilia, much of it acquired at Paris flea markets.

“He was a trailblazer.…He was born in Vicksburg, Miss., during the time of the segregated South, grew out of that most racist violent environment, and worked his way to Atlanta, to New York and to become the toast of Paris who had a successful multimillion-dollar company when he died,” said Laura Camerlengo, associate curator of costume and textile arts at the Fine Arts Museums of San Francisco. “And remarkably, he was lauded with accolades while being and remaining one of the few designers of any color to directly address race in his work.”

Since his death in 1990, Kelly’s name has become a rallying cry for designers of color, who launched The Kelly Initiative, an open letter to the Council of Fashion Designers of America in 2020 demanding more transparency and inclusivity in the fashion industry.

“In his time, Patrick was celebrated for re-appropriating racist imagery and reclaiming it, but he was also derided by some people,” Camerlengo said. 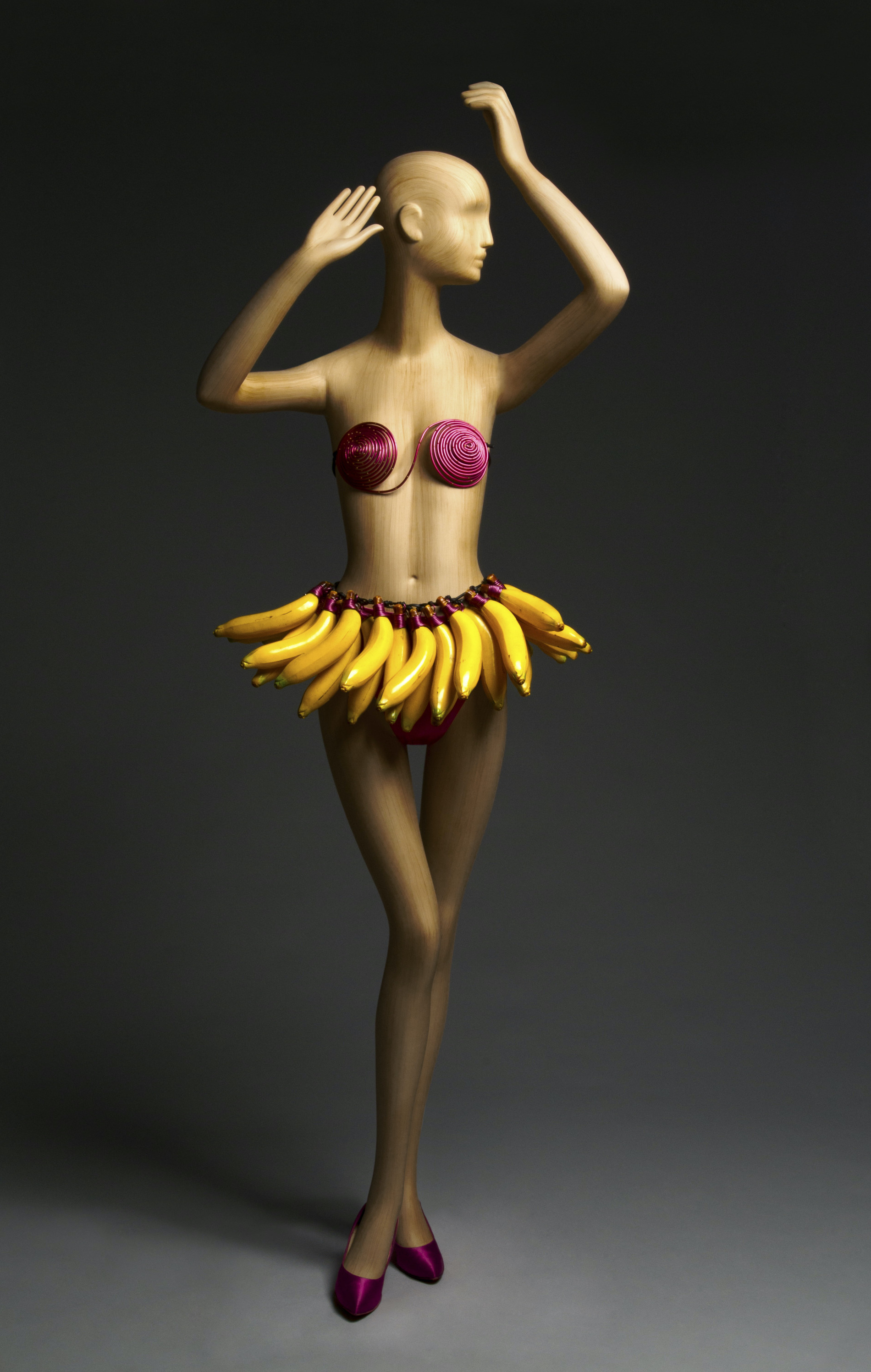 “This material not only inspired his brand and his logo but the environment in which he worked. There’s a spread from Architectural Digest of his studio and home, and you can see the memorabilia interspersed around him. We’re also going to look at the historical roots of his designs, such as overalls, which were commonly worn by Southern sharecroppers and later by Black civil rights activists,” she said. 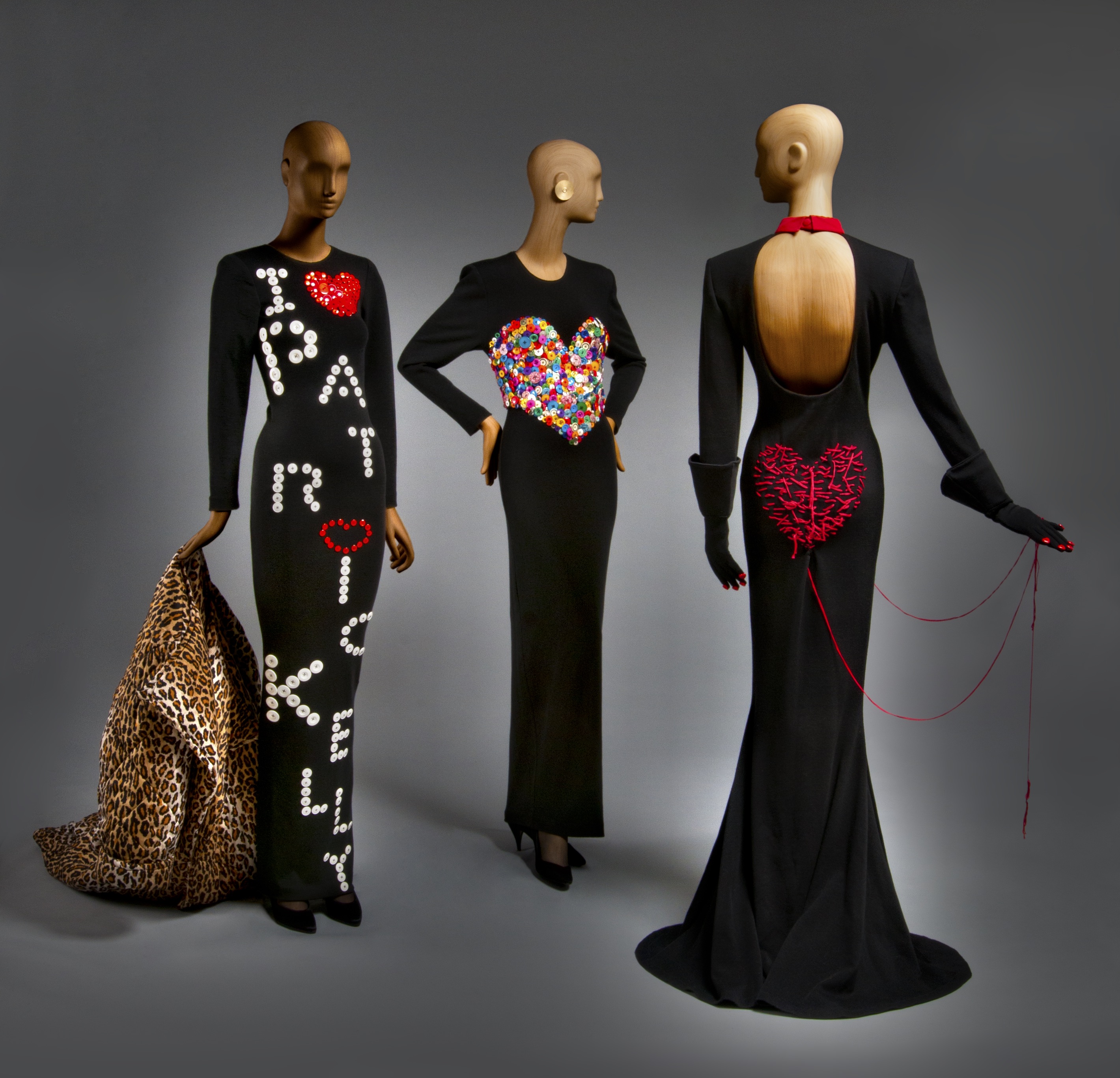 Kelly was the rare American designer of color to be backed financially by an American conglomerate, funded by Warnaco beginning in 1987.

“He was tremendously well celebrated in France, and his designs were popular in the U.S., but there was hesitation in including designs that were racially charged. For example, his shopping bags were not used in the U.S., they had the golliwog logo on them, and imagery that had roots in systemic racism was uncomfortable here,” explained Camerlengo. “That being said, in San Francisco, for example, his work had strong resonance, and was embraced by local boutiques and department stores. Macy’s and Nordstrom did tons of ads with his work, hosted meet-and-greets with Kelly, and he would be mobbed. There is a woman, Mary Ann Wheaton, the former president of Patrick Kelly Inc. [who tells a story]…about a woman who purchased a jacket off her back. To keep warm, she had to wear a tablecloth back to the Fairmont Hotel.” 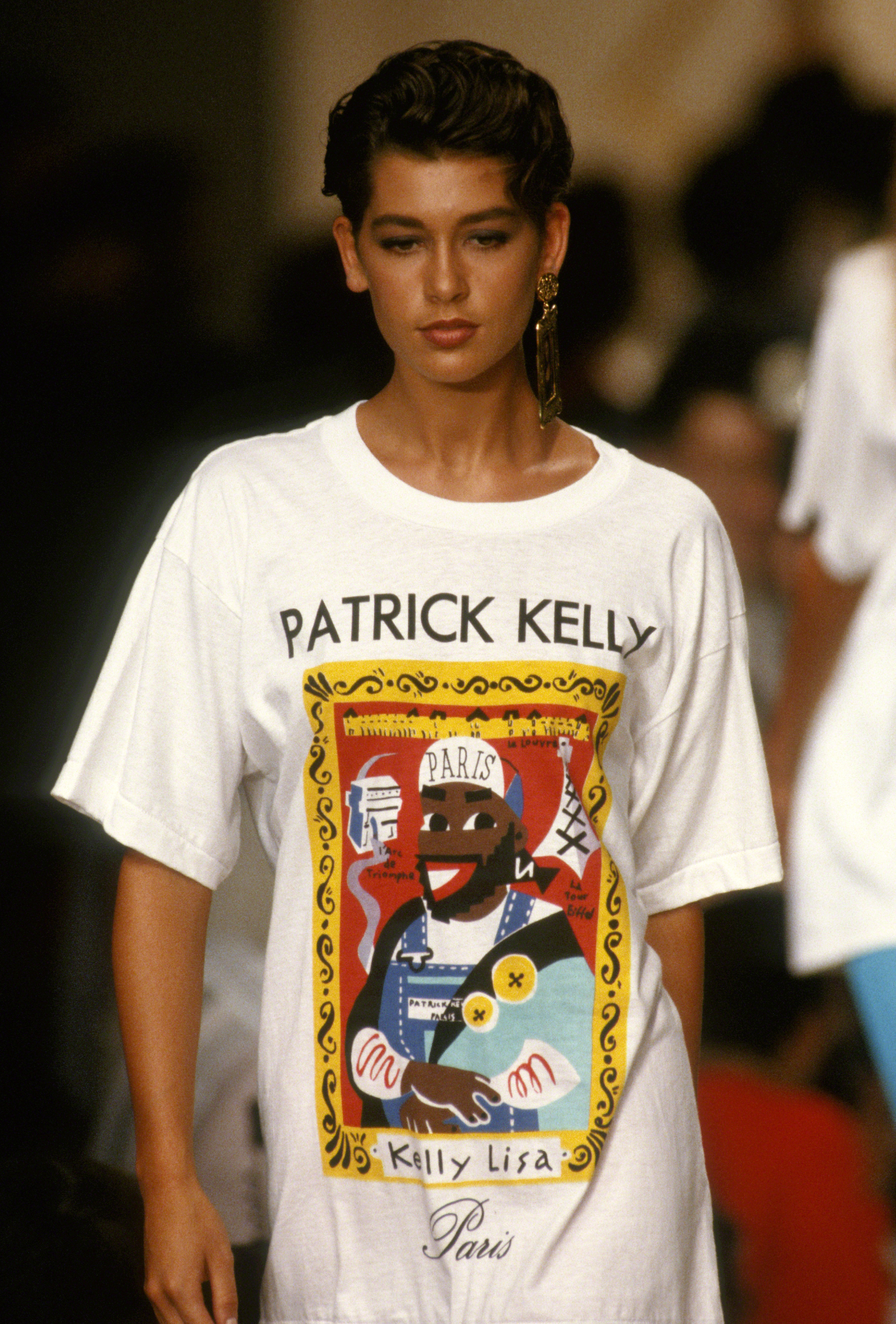 A model at the Patrick Kelly spring 1989 show circa 1988 in Paris. (Photo by PL Gould/IMAGES/Getty Images)
Courtesy

His designs were also embraced by celebrities, including Princess Diana, Grace Jones, Gloria Steinem, Madonna, Cicely Tyson and Bette Davis, who famously wore Kelly’s question mark dress on “Late Show with David Letterman,” and used it to turn the tables on the TV host and interview him.

Camerlengo sees reverberations of his spirit in fashion today. “Pyer Moss as a label, and Kerby Jean-Raymond as a designer is looking at the brutalization of Black bodies and reclaiming that in his designs and presentations. But the aesthetic of Kelly, the buttons, the bows, the bodycon dressing, has become pervasive in broader fashion design perhaps without people realizing where they came from.”

Love was at the center of his work, and each of his runway shows opened with a model spray-painting a heart on the back wall of the stage.

“I conducted oral histories of 40 of his friends and colleagues, and every time I spoke to someone I remember them feeling such joy — and that comes from Kelly himself,” Camerlengo said. “In the wake of COVID-19, I think we can all benefit from those feelings.” 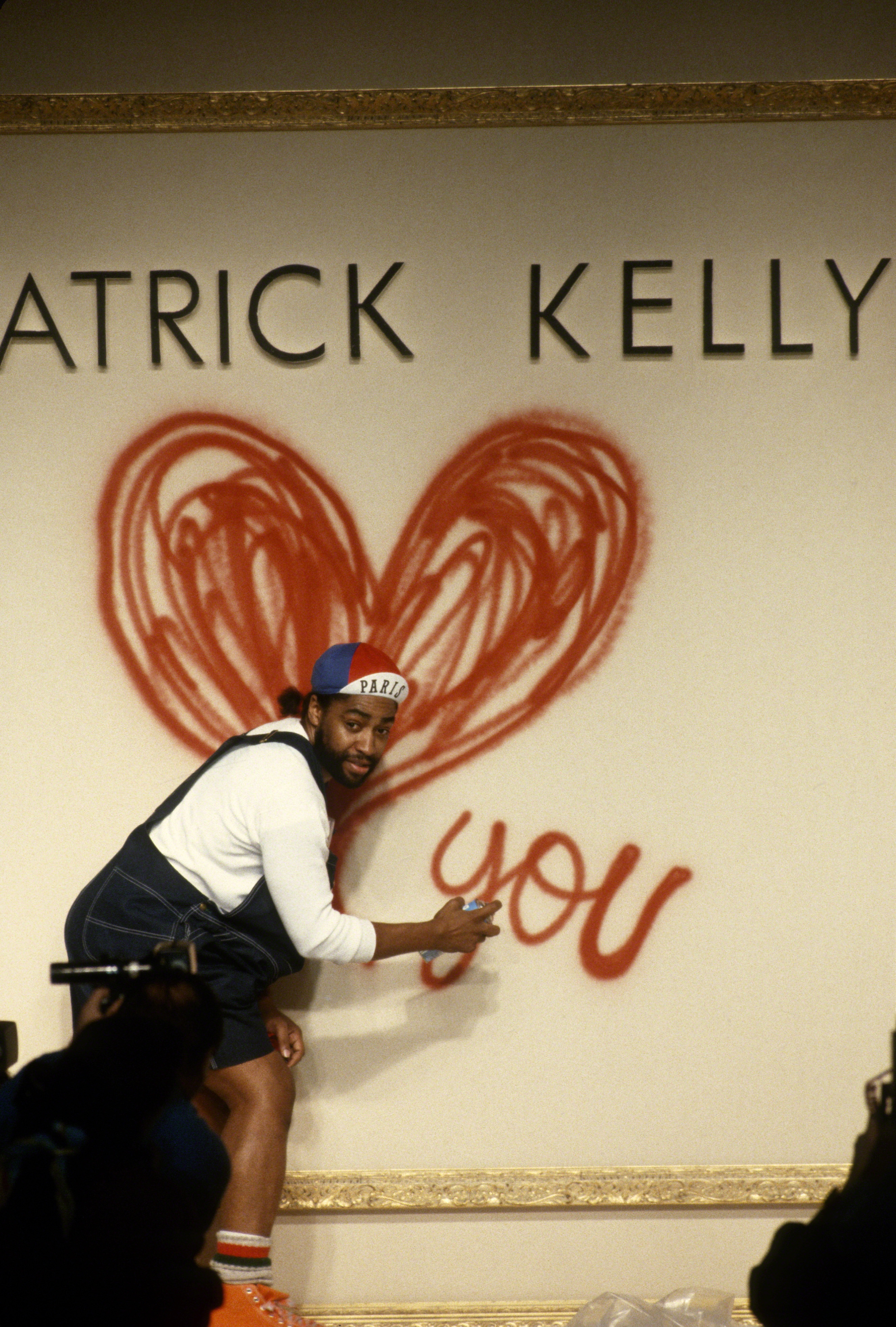