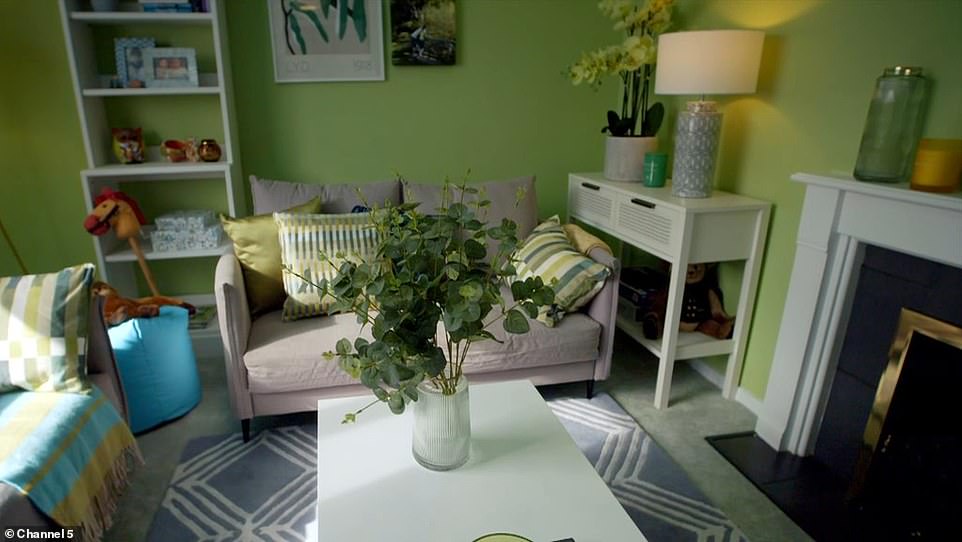 A busy couple with three children added £40,000 to the value of their three-bedroom semi by getting rid of 50 per cent of their belongings and bagging a free home makeover.

Appearing on Nick Knowles’ Big House Clear Out on Channel 5, Ian and Georgie explained they let clutter take over their home and their lives, while juggling work and raising their family.

The mother-of-three admitted the state of her house was hard to bear, with her children’s toy’s and her husband’s woodworking tools and musical instruments taking over each room.

The couple’s spacious house was valued at £425,000, but after they agreed to make some space by getting rid of their clutter, a new valuation estimated it at £465,000.

Parents-of-three Ian and Georgiefrom Farnborough in Hampshire added £40,000 to the value of their three-bedroom semi by getting rid of 50 per cent of their belongings and bagging a free home makeover. Pictured: the new living-room 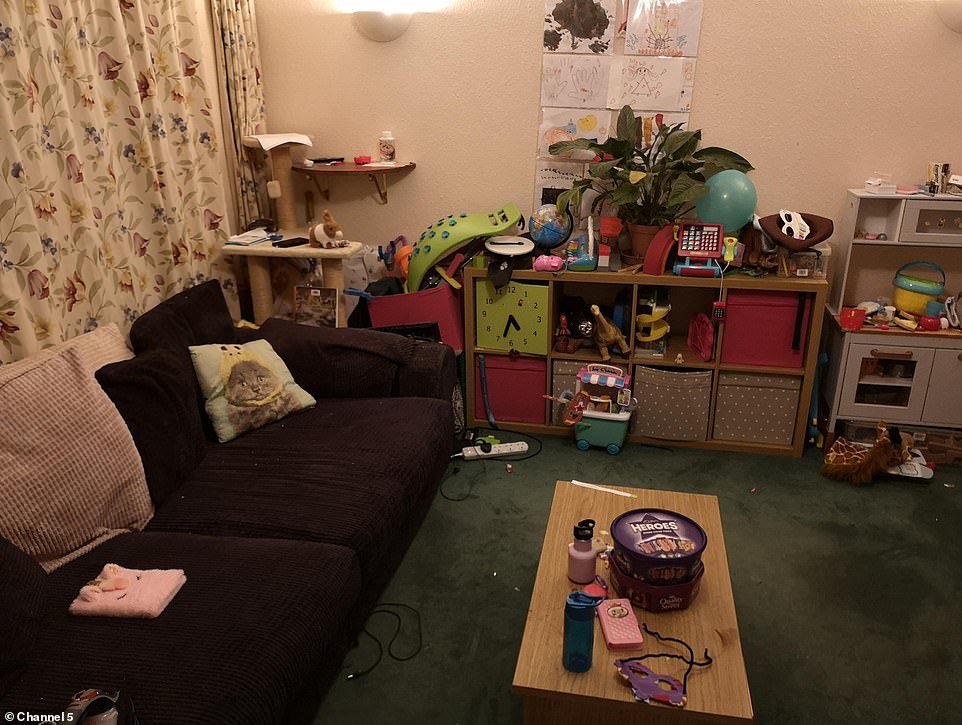 Before, the living-room was overun by the children’s toys and was not a relaxing space for Ian and Georgie 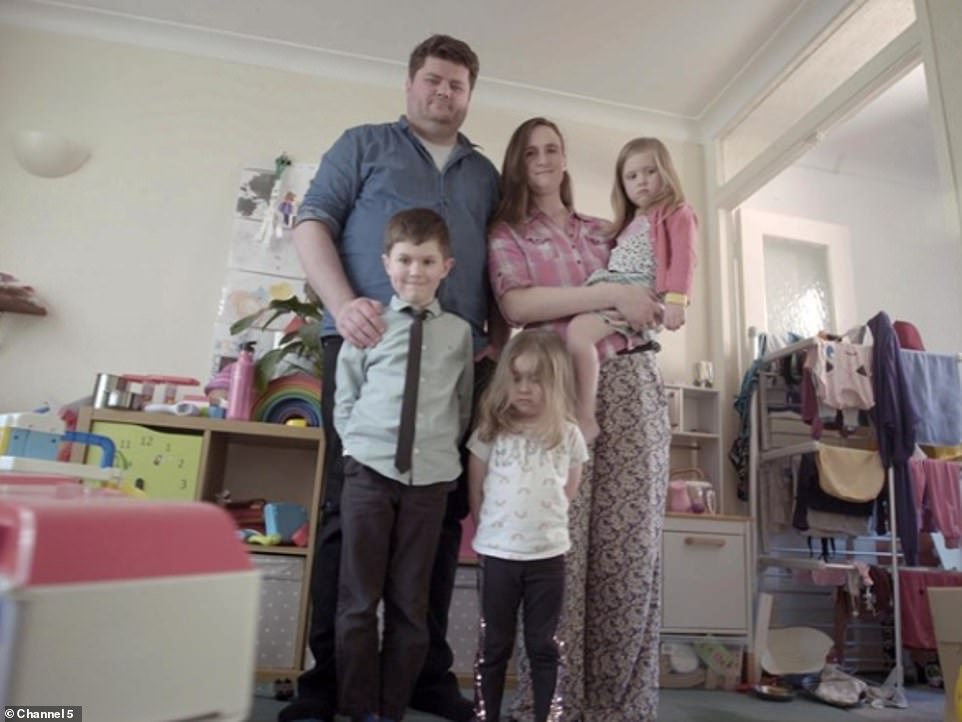 The couple said they could not cope with the clutter in their home, which they called ‘chaos,’ referring to their living room as a ‘gateway to madness’

Opening up about their busy family life with two-year-old twins Lyra and Julia, and their big brother Charlie, Ian said: ‘When we found out we were having twins, it was a huge shock. We wanted three kids in total but not that quickly.

The couple had no choice but to buy a bigger house, which forced Ian to take on a new job and ‘affected everything about our lives’.

‘Every room has a mixture of functions. The bedroom is where I work. The dining-room, we intended for that to be a family eating space, but we also use that for arts and crafts,’ Ian explained.

‘And the living-room isn’t just a living-room, it’s a play area as well. We just don’t have anywhere to breath,’ he added. 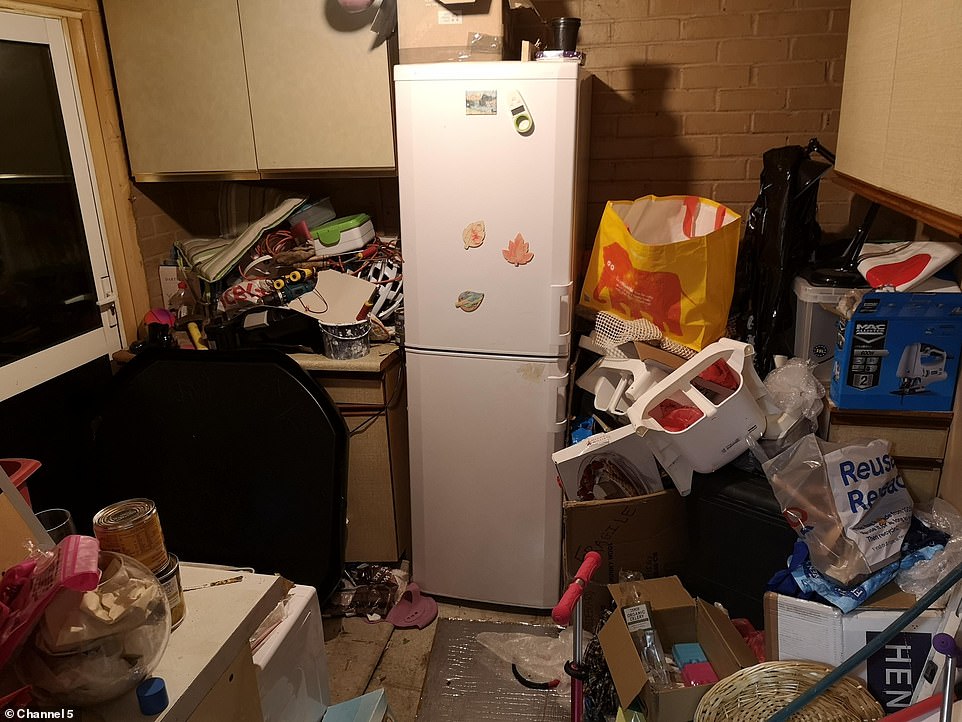 Nick called the utility room a ‘tip’ when he visited the home for the first time. It had become a dumping ground for the family’s unwanted items 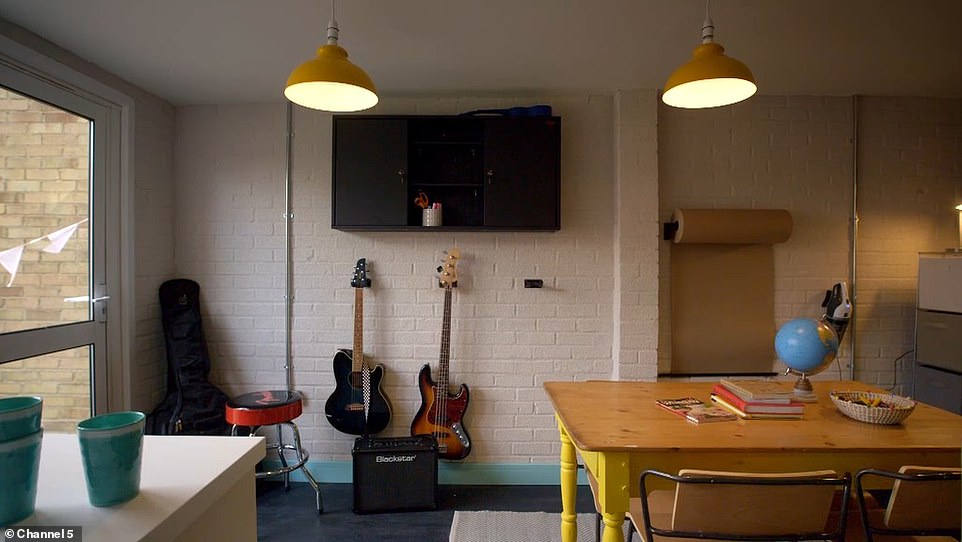 After the makeover, the family’s utility room was made bigger to become a hobby room for the children and Ian

‘We are drowning in a sea of toys. We have to dig through everything to try and find stuff. And it just takes so much longer and it’s so stressful,’ Georgie agreed.

All the rooms had become their own dumping ground. The dining-room was full of the kids’ craft tools and Ian’s console games and woodworking tools.

‘You got a lot of stuff in here, haven’t you,’ Nick said.

The situation was putting a lot of pressure on the whole family, especially Georgie. 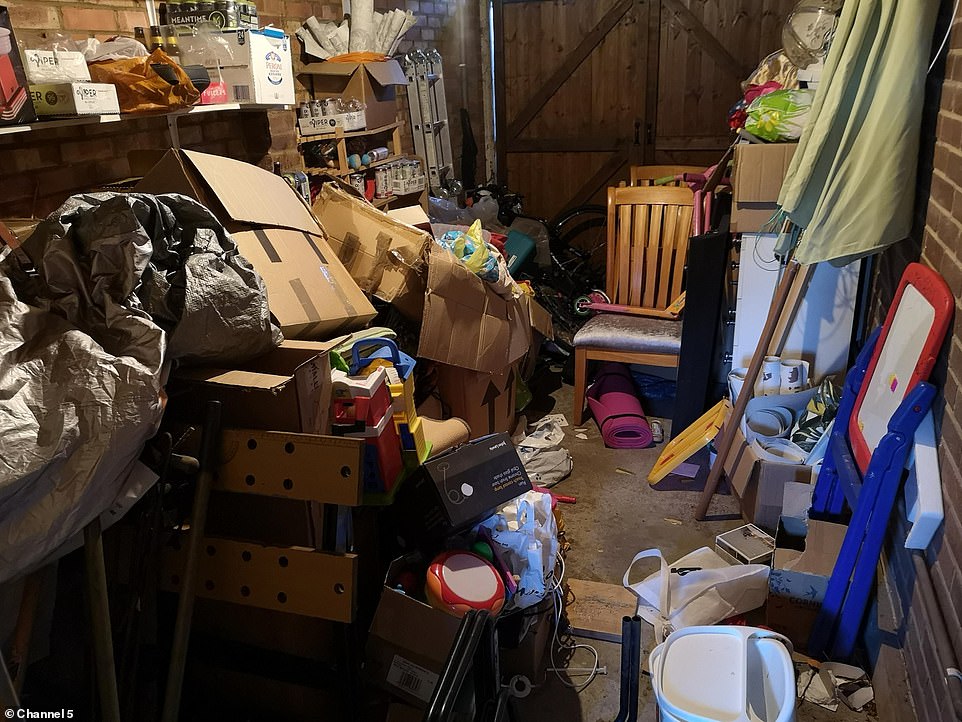 The garage was also filled with boxes of old items the family had little use for, and needed to be decluttered

Ian admitted he knew the state of the house was ‘eating Georgie inside out.’

‘There are things we could have gone sooner,’ the dad said.

‘I have no spare time, really, because the priority number one has always been the kids,’ Georgie said, tearing up.

‘I’m just worried they’re going to look back and remember a messy house,’ she said of her kids.

Nick lent a sympathetic ear to the couple’s struggle.

‘The thing that’s really obvious is, you’ve been under a lot of pressure here,’ he said.

The presenter also noted that the couple’s room was also full of stuff, and that most of it was either Ian’s or the children’s. 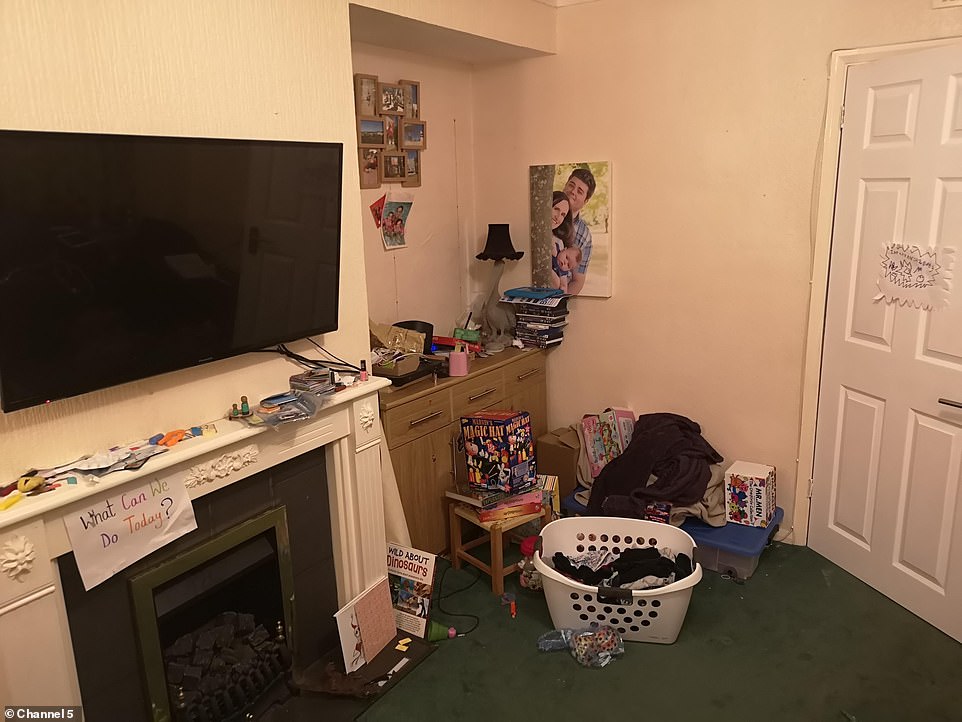 The living-room was so full of clutter that Georgie and Ian could could not open the door fully. They were tired of this situation, with Georgie admitting it was impacting her mental health 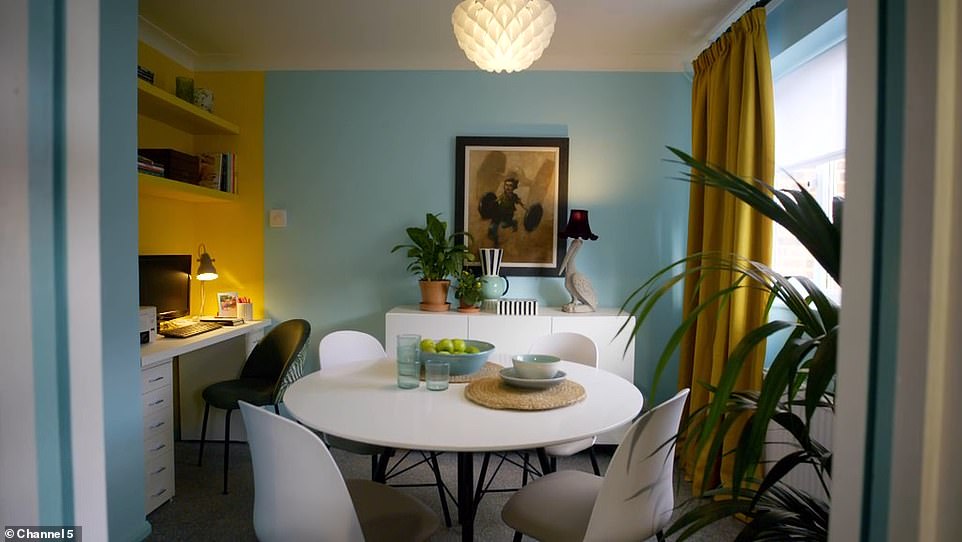 The living-room used to be a messy space with Ian’s wood crafting tools and the children’s toys taking over. It’s now a family dining area and a work space for Ian

Georgie said she liked bright, vibrant colours, but the house was beige and dark, and it was because the mother barely had any time to herself.

‘I come last in my order, I put everybody else first to make sue they’re happy and I squeeze in where I can,’ she told Nick as she cried.

The house came with a handy utility room and garage space, however, they were also neglected and used as dumping grounds with Nick calling them ‘a tip.’

Georgie’s mother Sally agreed the clutter was to much for Georgie to cope with.

‘All her efforts are going into being a mother, so she always struggles with the house. There is far too much stuff to pick up. I worry for her,’ she said.

Realising things couldn’t go on this way, the couple agreed to get rid of 50 per cent of their belongings in exchange of a free house makeover.

The team emptied their property and laid it out in a warehouse so that Ian and George could visualise how much stuff they had been piling up in their house.

Ian admitted that the ‘perspective comes crashing down hard,’ as they came face-to-face with their clutter.

Knee-deep in toys and piles of DVDs, the couple got cracking on the task, and began sorting out what could stay in the house and what needed to go.

Ian agreed to take his old computer games and consoles to a store in order to make some cash. They also sold some of their items at a car boot sale.

Meanwhile, Georgie gave most of her children’s toys away to a charity supporting deaf children.

The rest of the couple’s belongings were thrown in a recycling bin, and after five days of hard work, Ian and Georgie were ready to see their new and improved house.

The team painted the living-room a bright green, and made it an airy ‘grown-up space, for the couple to enjoy, with a reading space for Georgie.

‘It’s lovely. It’s so different and it’s not a playroom but it’s playful,’ the mother-of-three said.

‘I’d never picked this shade of green either, but it’s perfect,’ she added.

‘It’s given it the purpose that it should have, which is a living room, not a gateway to madness,’ Ian agreed.

Meanwhile, the dining-room was propped with a round table for family dinners and a working home station for Ian, with soothing colour. 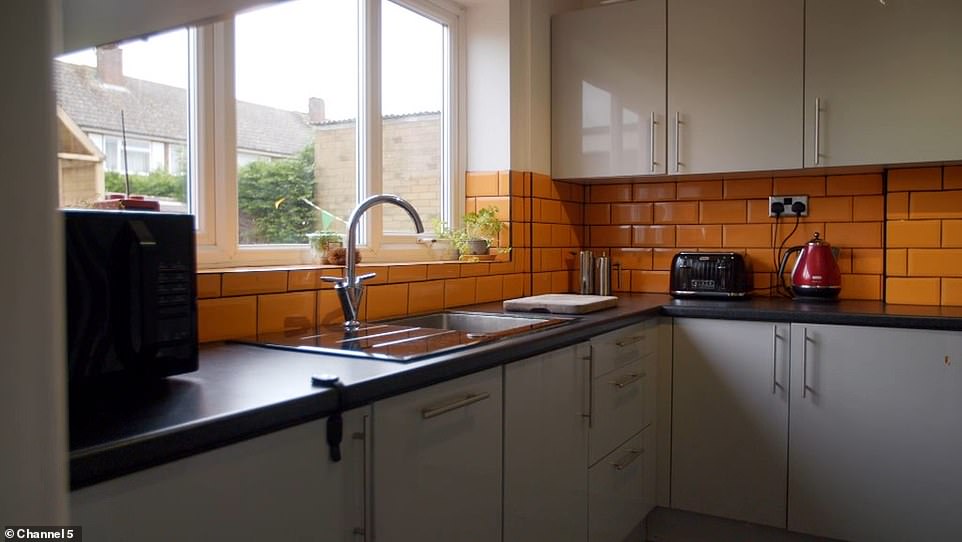 The kitchen was also done up on the show. Nick Knowles’s Big House Clear Out airs on Thursdays at 8pm on Channel 5

‘I feel happy and really comfortable, which we didn’t have before,’ Ian said.

A pair of double doors let to the updated kitchen, which was also done up and looked much neater.

The bedroom was cleared of the mess, creating tranquil space for the couple to relax in.

Meanwhile, the garage was cut in half, to make the utility room bigger.

It was turned into a communal hobby room for the whole family, with Ian’s musical instrument and woodworking accessories as well as the children’s toys neatly packed away.

‘The all purpose of this is to let those room let what they can be, dining room, workplace and grown up living room,’ Nick said.

Georgie said the decluttering had been a learning experience for the family.

‘We’ve all got some learning to do now. Learning to look after ourselves and each other,’ she said.

‘It’s physically, emotionally and mentally exhausting, it’s an overwhelming task to undertake, but it’s worth doing it,'[ she added.

Nick Knowles’s Big House Clear Out airs on Thursdays at 8pm on Channel 5.