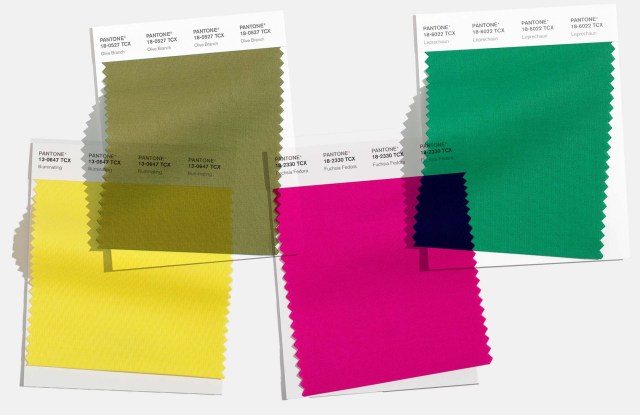 New York Fashion Week’s fall installment will be a primarily virtual amalgamation, but that hasn’t dimmed its color forecast in the slightest.

Reinvention and re-emergence are the driving forces, according to Leatrice Eiseman, executive director of the Pantone Color Institute. Rather than having colors stand on their own, which of course they all can, the palette is all about how they fuse together. After nearly a year of working from home, many people are dipping into their closets to retrieve long-forgotten or seldom-worn items to rev up their Zoom attire or just lighten their moods. Combining colors Leprechaun and Fuchsia Fedora with a dash of Illuminating allows for more creativity, for instance.

“We can’t say that people have more time to get creative, because if you’re working at home, time is still an issue. Nevertheless, you try to get creative because of the boredom, and the sameness that’s around you. That can be reflected in the clothing that you’re wearing,” Eiseman said.

Dressing up with no place to go has become an event in itself for some on social media, and the bolder, the better. “Experimentation is something that you can do at home, because who is going to criticize you?” Eiseman said.

“At one point, you would have though that Pale Rosette is very gender-specific to women. And yet we see great examples of that in men’s wear as well. You don’t have gender specific anymore. Any of the colors can be used together. You don’t have to think, ‘Oh, that’s such a masculine color or such a feminine color.’ There’s such a great mix that can be worn by any persuasion.”

Creative professionals are raring to infuse more colors into their collections. “Designers are more mindful of the fact that we need to have some infusion of colors even though everyone talks about calming, quiet and all of that. We have reached a point where we really want to offer some depth and excitement into the collection,” Eiseman said.

Technology is always an influence on color preferences. But as stay-at-home orders remain in place in many countries, people’s entertainment choices are factors too. Eiseman said she always encourages people to watch children’s animated films — regardless if they have children — to see the wackier way that color is used. “I always look at it from the standpoint of can we re-create that color? Can that then become a garment? I think a lot of designers are inspired by that as well,” she said, adding that consumers could duplicate color combinations they see in animated films.

“It’s beautifully expressive. Since this is a time we’re immersed in TV and watching so much of it, it could be something to learn from. It’s not only a joy, but to look at the color combinations and learn from them,” Eiseman said.

Mykonos Blue 18-4434: This brisk blue is evocative of the Aegean Sea and who wouldn’t want to plunge into the waves, given the chance? This “very crisp and refreshing blue” really gets our imagination going in wishing we could be there and is aspiring, Eiseman said. International travel is still a pipe dream for many, but Mykonos Blue can be found in Dior’s collaboration with Scottish artist Peter Doig.

Illuminating 13-0647: This eye-opening yellow and counterbalancing Ultimate Gray are Pantone’s 2021 Colors of the Year. Yellow’s prominence in designer collections “really bears out that idea of an optimistic color with the promise of a better future ahead and a sunny day,” Eiseman said. National Youth Poet Laureate and IMG model Amanda Gorman sported a vibrant take on this shade at last month’s presidential inauguration. TikTok star Wisdom Kaye recently sported an Illuminating hat for a Coach x Champion shoot.

Leprechaun 18-6022: Like Mykonos Blue, Adobe and Spring Lake, the name of this color can have a transportive effect. Who isn’t ready for a journey of any kind, even the imaginary, after months of quarantining? Leprechaun evokes all things Irish, the outdoors and “the fun side of nature,” Eiseman said. This strong green can be seen in Wes Gordon’s collection for Carolina Herrera’s 40th anniversary. Rare as it can be, the prospect of luck is a universal aspiration. If wearing green, may help bring it, so be it. This shade is meant to be reminiscent of the mythical imps from Irish folklore

Fuchsia Fedora 18-2330: Always alive, this bold pink is one that we need now more than ever, according to Eiseman. Rio de Janeiro’s kaleidoscopic carnival is still on pause, due to the pandemic, and next month’s Mardi Gras parades have been canceled. But this flirtatious hue offers a celebratory option. Zendaya sported this shade for a recent Louis Vuitton ad. For her first match at the Australian Open last week, Serena Williams wore an asymmetric unitard with Fuchsia Fedora stripes as an homage to former Olympic track star Florence Griffith-Joyner. Olivia Palermo recently jazzed up a leopard-printed coat with a Fuchsia Fedora collar.

Pale Rosette 13-1716: An endearing, gentle and romantic pink, Pale Rosette is a reminder that people still feel like they need something around them, when the world is whirling around them and there are so many challenges to face, Eiseman said. “It’s like a baby blanket color that you can wrap around yourself and feel very comfortable in,” she said. Designers aren’t the only fans of Pale Rosette. Ciara and Chrissy Teigen have dyed their hair this soft pink. Jason Momoa, Nicholas Hoult and Timothée Chalamet have sported clothes in this rose. Variations of this soft pink (as well as Coconut Cream and Soybean) can be seen in the more intricate costumes features in Shondaland’s popular Netflix series “Bridgerton.” Simone Rocha incorporated Pale Rosette for her new collaboration with H&M. Target’s All in Motion activewear also uses this color.

Adobe 17-1340: A sign of the “huge resurgence in terra cotta,” this sun-dried clay is also “a reminder that it could take us to places that we would love to visit if we had the opportunity,” Eiseman said. Think New Mexico and other desert climates. With earthy tones expected to be popular this summer, The Row, Proenza Schouler and Jil Sander are a few of the designer labels, who have favored Adobe. Brown is on the rise by 6 percent in Europe and up 5 percent in the U.S., according to an analysis of Instagram posts and identified catwalk trends.

Fire Whirl 18-1453: This vigorous red offers a certain amount of dynamism and excitement. In recent weeks, red balloons, ribbons and clothes has been used as a sign of solidarity for Myanmar’s ousted leader Aung San Suu Kyi. And in Russia, supporters of Alexei Navalny are wearing red in protest to his imprisonment. “That certainly means that color family is going to get a lot more attention. When it’s in the news and people see it online, it enters your subconscious even though you might not be thinking about the political implications of it. Still you become more familiar with the color and you see it in your peripheral vision. It becomes a color you are more aware of and you look for.”

Rhodonite 19-3838: A balancing blue-based purple, Rhodonite “from a psychological standpoint has come to represent achieving your highest potential,” Eiseman said. “We can take a message from that in the world that we’re living in. We need to look to that aspect of highest potential from even a spiritual or metaphysical standpoint.” Nearly midnight, Rhodonite often requires a double take. But it is more of a Zen, calming blue purple. Grace Elizabeth wears this deep color in an Estée Lauder ad.

Spring Lake 18-4221: A soothing, midtone blue, Spring Lake is more complex than a sky blue. Softer than Mykonos Blue, Spring Lake offers its own transportive appeal. The velvet trim on the Markarian coat that First Lady Jill Biden looked like Spring Lake. Phipps, Casablanca and Gap have styles in this blue.

Root Beer 19-1228: Reminiscent of the root bark of a sassafras tree, this brown is more about interest in getting back to nature, healing teas and herbs for wellness, Eiseman said. Byron Lars’ spring “In Earnest” collection featured Root Beer accents, as did the Alaïa spring line. Vice President Kamala Harris’ stepdaughter Ella Emhoff upped the fashion quota at the inaugural by wearing a plaid Miu Miu coat in Root Beer. Browns have been gaining ground and respect since the Nineties. Through Pantone color word association studies at that time, Eiseman noted “a huge shift,” due to Martha Stewart’s gardening, the feature film “Chocolat,” Levian brown diamonds and Starbucks popping up on city corners with brown interiors and coffee.

Coconut Cream 11-1007: In between a white and a cream shade, this has a slightly warm, peachy tonality, Eiseman said. For her acceptance speech last fall, Harris donned a Carolina Herrera pantsuit in this shade with a Soybean silk blouse. Coconut Cream could also be found in Demna Gvasalia’s Balenciaga collection that debuted in the bespoke video game “Afterworld: The Age of Tomorrow.”

Ultimate Gray 17-5104: “A perfect neutral shade,” from Eiseman’s point of view, Ultimate Gray is assuring, reliable and encourages composure. It also coordinates with any other garment. Thom Browne’s new children’s collection has a hearty dose of Ultimate Gray. Other designer fans of the color include Kim Jones at Dior and Olivier Rousteing at Balmain. Indicative of how fashion colors follow outside forces, Ultimate Gray can be found in Lamborghinis and other cars, as well as electronics and appliances like Sub-Zero refrigerators.

Soybean 13-0919: A companionable blonde beige, Soybean blends beautifully with anything, Eiseman said. Indya Moore sported a pantsuit in this hue for a Tommy Hilfiger ad. Designer houses like Tory Burch, Lemaire and Stella McCartney have worked this rich color into their collections. Holzweiler and By Malene Birger are also fans of this natural-looking color.

Olive Branch 18-0527: This tasteful green is a versatile, seasonless option. Designer Sergio Hudson was recently photographed wearing a camouflage hoodie in this color. Actress Hina Khan was all about an Olive Branch-patterned suit on Instagram earlier this week. Pippa Middleton was photographed strolling around London in a jacket in this shade. Although it wasn’t green-themed, Lady Gaga’s custom Schiaparelli ensemble for Inauguration Day featured a gilded brooch shaped like a dove carrying an olive branch.