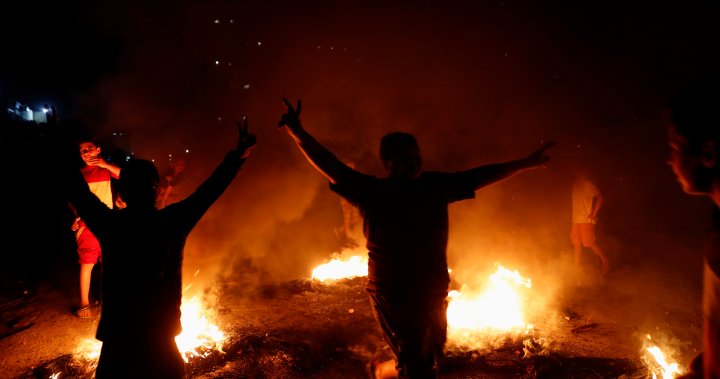 Palestinian militants in the Gaza Strip fired some three dozen rockets into Israel overnight Saturday, while the Israeli military struck back at targets operated by the ruling Hamas group. The exchange came as tensions in Jerusalem spilled over into the worst round of cross-border violence in months.

The barrage of rocket fire came as hundreds of Palestinians clashed with Israeli police in east Jerusalem. The clashes, in which at least four police and six protesters were injured, have become a nightly occurrence throughout the Muslim holy month of Ramadan and show no signs of stopping.

Israeli Prime Minister Benjamin Netanyahu says he held talks with top security officials about Gaza and Jerusalem. He said he instructed officials to be ready for `every scenario’ in Gaza. In Jerusalem, he said Israel would guarantee `freedom of worship’ for everyone, and he appealed for calm. “We ask now for people to obey the law and I call for a calming of tempers on all sides.”

The U.N. envoy to the region, Tor Wennesland, condemned the violence and said the United Nations was working with all sides to restore calm.

“The provocative acts across Jerusalem must cease. The indiscriminate launching of rockets towards Israeli population centres violates international law and must stop immediately,” he said. “I reiterate my call upon all sides to exercise maximum restraint and avoid further escalation, particularly during the Holy month of Ramadan and this politically charged time for all.”

Meanwhile, Israeli chief of staff, Lt. Gen. Aviv Kochavi, is weighing “a series of steps for possible responses,” and preparations if the situation continued to escalate, the military said in a statement. He also postponed a trip to the United States that was scheduled for Sunday.

The U.S. also appealed for calm, while neighbouring Jordan, which serves as the custodian for Jerusalem’s Muslim holy sites, condemned Israel’s actions.

Jerusalem, home to holy sites sacred to Jews, Christians and Muslims, has long been a flashpoint in the Israeli-Palestinian conflict. In 2014, similar tensions erupted into a 50-day war between Israel and Gaza’s ruling Hamas militant group.

The Israeli military said a total of 36 rockets were fired into Israel throughout the night. It said six rockets were intercepted, while most of the others landed in open areas. There were no reports of injuries or serious damage, but the incoming rocket fire set off air-raid sirens throughout southern Israel.

In response, the army said fighter jets and helicopters struck a number of Hamas targets in Gaza, including an underground facility and rocket launchers. Hamas did not claim responsibility for the rocket fire, but Israel considers the group responsible for all fire emanating from the territory.

Israel and Hamas, an Islamic group sworn to Israel’s destruction, are bitter enemies that have fought three wars and numerous skirmishes since Hamas seized control of Gaza in 2007.

Although neither side appears to have an interest in escalating tensions, Hamas sees itself as the defender of Jerusalem and may feel obligated to act, or at least tacitly encourage rocket attacks by other groups, ahead of upcoming Palestinian parliamentary elections. Hamas’ armed wing has warned Israel “not to test” its patience.

At dawn, hundreds of people in Gaza challenged nightly curfews imposed by Hamas to curb the coronavirus outbreak and took to the streets in an act of solidarity with fellow Palestinians in Jerusalem, burning tires.

The Palestinians want east Jerusalem to be the capital of their future state. Its fate has been one of the most divisive issues in the peace process, which ground to a halt more than a decade ago.

Palestinians have clashed with Israeli police on a nightly basis since the start of the Muslim holy month of Ramadan nearly two weeks ago.

The tensions began when police placed barricades outside the Old City’s Damascus Gate, where Muslims traditionally gather to enjoy the evening after the daytime fast.

The clashes intensified Thursday evening when hundreds of Palestinians hurled stones and bottles at police, who fired a water cannon and stun grenades to disperse them. Dozens of Palestinians were wounded in the melee.

At the same time, a far-right Jewish group known as Lahava led a march of hundreds of protesters chanting “Arabs get out!” toward the Damascus Gate. The group, led by a disciple of the late racist rabbi Meir Kahane, is allied with elements of a far-right party elected to Israel’s parliament last month.

The show of force came in response to videos circulated on TikTok showing Palestinians slapping religious Jews at random. Other videos made in response to them appear to show Jews assaulting Arabs. After keeping them a few hundred metres away from Damascus Gate, police used water cannon, stun grenades and mounted police to push far-right protesters back toward mostly Jewish west Jerusalem.

In all, police said 44 people were arrested and 20 officers were injured.

There were concerns the violence could reignite following Friday noon prayers at Jerusalem’s Al-Aqsa Mosque, but thousands of worshippers dispersed peacefully after Muslim religious leaders called for restraint.

But in the evening the clashes resumed as dozens of Palestinians marched toward an entrance to the walled Old City of Jerusalem. Police said the protesters threw stones and fireworks and damaged both civilian and police cars.

Foreign Minister Ayman Safadi tweeted: “As the occupying power under international law, Israel is responsible for stopping these attacks & for the dangerous consequences of failing to do so.”

Jordan has had a peace agreement with Israel since 1994, but relations in recent years have been chilly, in part because of recurring disputes over Israeli actions in Jerusalem.

The U.S. Embassy said it was “deeply concerned” about the violence in recent days. “We hope all responsible voices will promote an end to incitement, a return to calm, and respect for the safety and dignity of everyone in Jerusalem,” it said.

The Old City is home to a sensitive holy site known to Muslims as the Noble Sanctuary and to Jews as the Temple Mount. The site, home to the Al Aqsa mosque compound, is the third-holiest site in Islam. It also is the holiest site in Judaism, revered as the spot where the biblical Temples once stood.

The sprawling hilltop compound has seen clashes on a number of occasions over the years and was the epicentre of the 2000 Palestinian intifada, or uprising.