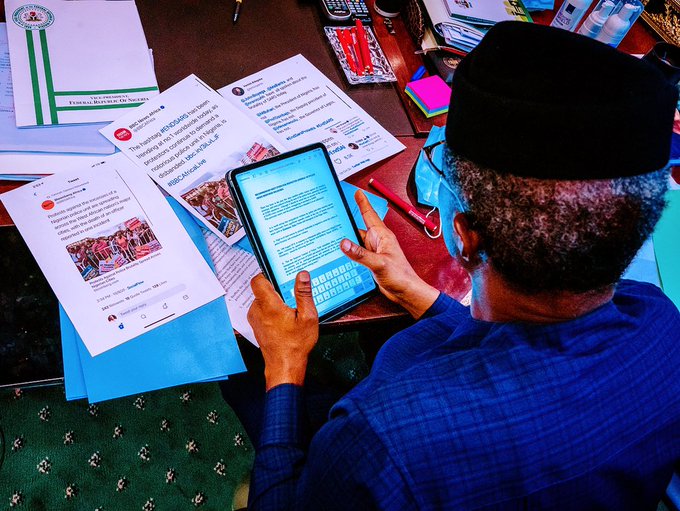 Vice President Yemi Osinbajo Thursday, emphasized the need for the private sector in achieving the 2025 targets set by Nigeria to end the menace of open defecation in the country

Osinbajo, speaking at a virtual ceremony organized to mark the first anniversary of “Clean Nigeria: Use the Toilet” Campaign, said the private sector has a critical role in building a virile sanitation economy which will drive the sustenance of the results being achieved under the Clean Nigeria Campaign.”

A recent estimate by the United Nations Children’s Fund UNICEF had indicated that the country will need an estimated 959 billion Nigerian naira ($2.7 billion) to end open defecation by 2025.

Out of this amount, the government is expected to provide about 25%, or NGN234 billion”

The UNICEF report had also indicated that the country loses as much as N455b annually to poor sanitation.

The other 75% of the cost will be incurred by households.

“The majority of the costs to households will be spent on constructing toilets for those that don’t have them, while funds from the government will be spent on public projects including ensuring access to toilet facilities at public places,” explained Zaid Jurji, head of WASH at UNICEF Nigeria.

This has prompted the federal government to encourage the emergence of a toilet business ecosystem, for the private sector to come up with innovative toilet design financiers to provide loans and other financial tools to households, community organizations.

The open defecation menace is said to have eaten deep into the nation’s social fibre with cosmopolitan areas like Apapa, Nigeria’s port city in Lagos, and other major cities being littered with human defecation.

Osinbajo sees this as a major challenge that all Nigerians irrespective of social class or status, including the organized private sector, must rise up to address.

According to the Vice President, “the success of the Clean Nigeria Campaign will contribute to some of the key priority areas of this government which include enhancing social inclusion and poverty reduction, expanding business growth and entrepreneurship; and expanding access to quality education, affordable healthcare and productivity of Nigerians.”

Continuing, Osinbajo said “we are aware that access to adequate Water, Sanitation and Hygiene (WASH) services is a critical factor in the socio-economic development of any nation and contributes to human capital outcomes such as early childhood survival, health, and educational attainment. Access to WASH services is also one of the key preventive measures in the raging global COVID-19 pandemic.”

Speaking on the role of the private sector in the actualization of the objectives, Osinbajo stated that “the initiative of the Organized Private Sector in Water, Sanitation and Hygiene (OPS-WASH) tagged ‘FLUSH IT’ which aims at promoting private sector-led innovative financial strategies in WASH, is a welcome development.”

Aside from the main goal of ending open defecation across the country, the Buhari administration is prioritizing the Clean Nigeria Campaign as its success contributes to key initiatives including, enhancing social inclusion; poverty reduction; business growth, and entrepreneurship; greater access to quality education and affordable healthcare, among others.

He stated that the commitment of the Federal Government to the success of the campaign especially by appointing campaign ambassadors to support the process, Osinbajo said “in our desire to aggressively mobilize the entire country towards ending the practice of open defecation, we have identified Campaign Ambassadors to support the national drive towards open defecation free status.”

The Vice President explained that “these are citizens who have contributed to the existing successes achieved so far under the Campaign or have been identified as persons of influence who can significantly advance the Campaign.

“Clean Nigeria Campaign Ambassador will be required to provide leadership in advancing the objectives of the Campaign and engage in Campaign activities as may be initiated by you or other stakeholders.”

Giving further insights about what the Federal Government is doing to sustain current efforts, Osinbajo said “the Clean Nigeria Campaign is backed by Presidential Executive Order 009 which gives effect to its implementation.”

“The Executive Order provides that the National Open Defecation Free (ODF) Roadmap be put into effect towards meeting the national target of ending open defecation by 2025.

So far, only 33 LGAs in the country are known to be open defecation free.

“It mandates the ‘Clean Nigeria Campaign Secretariat’ in collaboration with relevant government institutions to ensure that all public places including schools, hotels, fuel stations, places of worship, market places, hospitals, and offices have accessible toilets within their premises.

“It also provides for the enactment of legislation appropriate sanctions and penalties to back up the fight against open defecation while ensuring that all developmental projects include the construction of sanitation facilities as an integral part of the approval and implementation process,”

Osinbajo however noted that “ending open defecation is not just about access to toilets. It is about generating demand for toilets and changing people’s behaviour regarding toilet usage.

According to him “The Clean Nigeria Campaign as a transformational and behaviour change campaign, will require the contribution and commitment of everyone, including government at all levels, civil society, private sector, development partners and the entire populace in building a new culture of safe sanitation.”

The campaign to end open defecation in Nigeria was launched about a year ago to galvanize efforts from both public and private sectors to promote water, sanitation, and hygiene in the 774 Local Government Areas (LGAs) across the country.

Aside from the host, the Minister of Water Resources, Suleiman Adamu, other officials at the event include the Minister of State for FCT, Ramatu Aliyu; representatives of Ekiti State Governor, Kayode Fayemi, and development partners and the organized private sector.