The 2020 edition of the Asisat Oshoala 8-aside football tourney will get underway in December.

The football tourney which is expected to hold in Lagos Nigeria will involve 32 teams in Nigeria, who will take part in the 1-week tournament.

The event is in partnership with Emzor, SPAC Nation Foundation, and Hope for the Masses Foundation.

“Yes, we are trying to change the game. First and foremost I want to apologize to my fans. We won’t be having the normal scouting programme due to a lot that happened in 2020. So I and my team have decided to come up with a tournament, more like an aside football game if you are a pro footballer or amateur, register with 12 players and if you win you get a cash prize and a scholarship.”

In the last few years, the Asisat Oshoala Foundation has produced over 10 players for the Nigerian national teams, from the under 17, to the under 20, to the Super Falcons.

Two of the notable players are Rashidat Ajibade and Chidinma Okeke, and both of them have played for the Super Falcons and they ply their trade abroad for their respective clubs.

Ajibade was the most valuable player of the 2017 edition of the football4girls tourney, and she made her debut for the Falcons in 2018. She now plays for a Norwegian side, Avaldsnes IL.

Okeke won the most valuable player award for the 2018 edition of the football4girls tourney, and like Rashidat, she also made her debut for the Super Falcons the following year, and she plays for Madrid CFF in Spain.

The tourney is majorly a scouting project, and the successes recorded are evident, but this year, due to the pandemic, we have decided to do an 8-aside just to keep the game alive and to give hope to the girls, who are waiting to be a part of the tournament.

For the 2020 edition, all participating teams will battle it out for the grand prize of one thousand dollars ($1000), and also an educational scholarship.

Remember, the goal of the Asisat Oshoala Foundation is to give hope to the girl child through education and sports, and the 2020 edition of the football4gils will do just that. 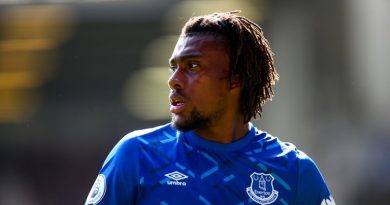 Iwobi Impresses Vs Brighton And Hove Albion Get Praised