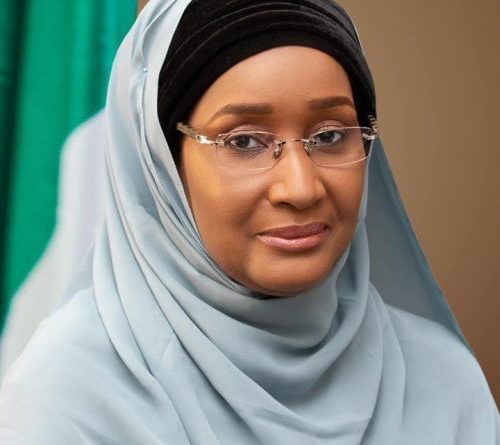 Unlike the proverbial lizard which resorted to self-praise for surviving the self-inflicted ordeal of hitting the ground after leaping from the top of a tall tree, the recipient of well-considered but unsolicited accolades for sterling service to humanity, delivered diligently by sheer organizational acumen and humane passion, has earned posterity’s praise  which needs no embellishment.

After being relentlessly targeted by hired hack-writers and mercenary mudslingers unleashed by political detractors to disparage her enthusiastic efforts and remarkably rapid and impactful performance in the multi-tasking demands of setting up a functional new mega-ministry by harmonising and consolidating several uncoordinated but related agencies while simultaneously fine-tuning and ensuring continuity of their respective programmes, authoritative endorsements and credible commendations from important stakeholders at the grand finale of events in commemoration of the ministry’s first year anniversary in Abuja,  were welcome consolation and morale-booster for the Amazon of Ministers.

It was sufficient, for example, for UN Resident Coordinator of Humanitarian Affairs, Mr Edward Kallon, to emphasize that though the responsibility of the ministry was enormous “Sa’adiya has started well, many people will be making negative comments, but she has done well. We are with you and we support you in all that you do”, yet Plateau State Governor and Chairman of Northern Governors Forum, Mr Simon Lalong added an assurance that the Forum would continue to support the Minister in implementing her programmes. He urged Hajia Sa’adiya Farouq “not to be discouraged by side talks and negative comments”, and remarked that it was a tree with good fruits that people threw stones at. Vindication par excellence !

Of course, the Minister has always impressively remained calm and collected in the midst of all the orchestrated rabble-rousing, a subtle strategy that enabled her result-oriented performance to speak louder for her than any vendetta or rejoinder. This was evident in her candid comments at the anniversary as she commended President Muhammadu Buhari’s wisdom in establishing the ministry whose first year of existence she described as “eventful, challenging and rewarding”, pointing out that the Ministry is saddled with the responsibility of overseeing responsibilities that were hitherto domiciled in other Ministries, Departments and Agencies (MDAs) and also to provide the coordination of humanitarian interventions in Nigeria.

“It is rewarding in the sense that when we visit the field and see beneficiaries whose lives are being changed by the Federal Government’s humanitarian interventions, it leaves us with a sense of fulfilment that we are doing something worthwhile for humanity. In spite of seemingly daunting and often demanding situations, the ministry and its agencies have provided humanitarian interventions and proactively developed structures to prevent and mitigate disaster”, the minister declared.

She was still more concerned with raising the tempo of actualization of the humanitarian and rehabilitative agenda of her ministry, obviously conscious of the unfortunate prevailing circumstances that have aggravated the plight of the populations of poor and other vulnerable persons with pathetic pressures of enforced destitution, displacement and deprivation of basic survival and livelihood conditions, even as government’s capacity to respond robustly is significantly curtailed.

For Hajia Sa’adiya Umar Farouq however there can be no turning back or despondency in maximizing available resources and expanding the avenues for government intervention by innovative policies to reach more poor and other vulnerable persons, including the teeming population of youths in need of self-sustaining means of livelihood. After substantially reversing the declining fortunes of many existing programmes, especially N-POWER where about 109,823 beneficiaries from Batch A and B have gone on to set up businesses in their communities while the 500,000 Batch A and B beneficiaries who were in limbo for years have also been successfully exited, paving the way for Batch C with a total of 5,042,001 registrations received.

Going forward, the minister was elated with the take-off of the National Commission for Persons with Disabilities following the presidential approval of the appointment of the executive members of the Commission expressing her happiness and fulfilment that one of the vulnerable groups “close to my heart” finally have a commission  in place to cater to their needs, protect their rights and provide an enabling environment for them to maximize their potentials, thrive and contribute values to the society and the nation as a whole.

She disclosed that the ministry was working on the take-off of the National Senior Citizen’s Centre and a Humanitarian Assistance Help Desk to provide feedback and complaint mechanism for humanitarian actors to report and resolve challenges that impede humanitarian activities. Nigeria has over 30 million persons living with disability that the commission will serve. The ministry is also addressing the equally important issue of creating structures and policies to guide humanitarian activities having held the first-ever Civil Security Cooperation Workshop where the Civil Security Coordination Framework and other structures were considered.

Only sworn enemies of the various categories of vulnerable people in Nigeria will persist in a vain charade to deliberately disparage the transparently impactful performance of Hajia Sa’adiya Umar Farouq as Minister for Humanitarian Affairs, Disaster Management and Social Development in one year of setting up such a complex ministry and clearing the logjams and inconclusive loopholes afflicting existing intervention programmes for smooth and enhanced implementation processes. What matters most to the Minister is that the key stakeholders and target beneficiaries should continue to feel the tangible impact of the programmes under the ministry as they have testified to.

Huge as the task is, it only represents the next level in Hajia Sa’adiya Farouk’s rise to prominence as an accomplished administrator of humanitarian operations and related disaster management and social development matters.  Just before joining the Federal Executive Council in such a big way, she was the Federal Commissioner, National Commission for Refugees, Migrants and Internally Displaced Persons where she built an outstanding career in supervising the harnessing and delivery of relief materials, life-saving palliatives and vocational incentives for meaningful intervention in the distressed lives of refugees and other vulnerable people. She is visible wherever Nigerians are in distress which unfortunately is an inevitable occurrence, as the flood victims she is currently busy attending to with characteristic empathy and authoritative concern.