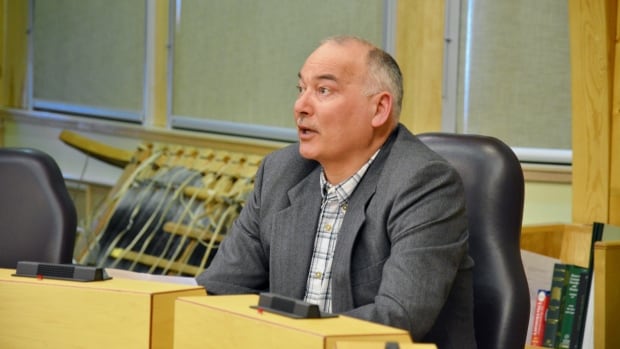 Nunavut Premier Joe Savikataaq called on residents to “plank these numbers and do what we need to do” as the territory reached 70 cases of COVID-19 and began a two-week lockdown on Wednesday.

“Our rise in cases over the past few days is significant, and seems scary,” Savikataaq said, but “we did know they would rise once it is in the territory.”

All individuals are in isolation in their own homes and doing well, according to Chief Public Health Officer Dr. Michael Patterson.

Some health-care workers have also been asked to self-isolate, Patterson said during the news conference.

“In Arviat, it’s too soon to say if we’ve stopped community transmission at this point,” he said.

“In other communities things are more stable and we’re certainly closer … to having it stabilized and contained.”

Patterson, who called on Nunavummiut to co-operate with contact tracers as they try to find who may be at risk of spreading or coming in contact with the disease, said his team has found no particular superspreader type events at this point which could have led to the large number of cases.

Patterson also cleared up some confusion around the rules for Nunavut’s two-week lockdown order.

Indoor gatherings are also legally restricted to five people in addition to the people living in the household, but Patterson urged people not to visit, or gather unnecessarily.

Patterson said that while masks are only mandatory in communities with active COVID-19 cases, businesses anywhere in the territory can mandate masks for their staff and patrons.

Non-essential work, however, must stop. “In essence, if you closed back in March you must close again.”

Last week Patterson said that child-care facilities could stay open, to help critical staff do their jobs, but he clarified that this is “not an order” and that child-care providers are free to shut down if they wish.

Patterson added that he hopes the centres will stay open so essential workers have a place to send their children.

During the livestream of the news conference, several audience members suggested to CBC News that people who isolate in southern cities should be tested for COVID-19 when they return into the territory.

CBC News asked Patterson if that was on the table.

“There’s a lot of debate and uncertainty about how and whether or not to augment isolation with testing,” he replied. “Other jurisdictions [that] have added testing into their isolation have also seen cases arrive.”

Patterson said it would take a lot of work to “build capacity in the South to do that testing.”

Because Nunavut has less well-resourced medical care and zero intensive care units, the lockdown is the best way to manage capacity, Patterson said.

The Kivalliq Health Centre in Rankin Inlet has six beds. It will be up to the doctor there to decide if someone in the region needs more serious care, Patterson said. “If anybody is in [a] situation where they need ongoing fluid, oxygen, or life support, they obviously can’t stay in a health centre and will need to go to a southern hospital.”

Traditionally, people in the Kivalliq region go south to Manitoba for specialized care. But that province is now struggling with its own explosion of COVID-19.

Patterson said if the hospitals that Nunavummiut usually go to are full, the Health Department will look at other hospitals it works with less often.

Territorial Health Minister Lorne Kusugak said that in a recent meeting, the federal government offered to support the territory.

“We don’t want to have to go there, but if there was a need in fact for the military to come and give us that support, they would be able to go to that extent,” he said.

On Tuesday, the territory’s COVID-19 caseload more than doubled from the previous day, reaching a high of 60 cases.

The majority of those cases are in Arviat. The hamlet, located on the western shore of Hudson Bay, is home to more than 2,500 people.

Another eight cases were identified in Whale Cove, which has a population of about 435 people, and is located about 150 kilometres north of Arviat.

Cases have also been identified in Rankin Inlet and Sanikiluaq.

Patterson said that turnaround times for tests have improved since the start of the pandemic, because the government has new testing equipment in the territory.