Ex BBNaija housemate, Angel Smith has come out to say that she has been receiving calls from unknown numbers threatening to kill her because of her relationship status.

She recently had her say via her social media page, and Nigerians have been reacting.

According to her, people should know that she’s very much single and she’s not in love with anyone at the moment, contrary to what a lot of people assume.

Angel added that people should also know that no one can dictate who she chooses to be friends with after the show.

Her words, “I’m not a messy person at all, especially in real life, I like my space and I like to avoid confrontation but this is me putting it out there that I’ve been getting death threats from “no caller ids” regarding my “relationship status.”

“I’ve stated time and time again, that I am single and frankly I promise I will not be chasing anything that will take away my peace. Please stop calling me to threaten me because of my affiliation with your “fave”. I am single. Thank you.”

“I will also like to state that you can not dictate who I choose to be friends with, I have no intention of stealing your fave from whoever. Please leave me out of whatever enmity is trying to be formed. I am only focused on my brand.”

“I’m too content within myself to be out here dragging anyone’s “man”. All I’ve ever needed is myself and I can do very well by myself. Thank you.”

Big Brother Naija, formerly known as Big Brother Nigeria, is a Nigerian reality competition television series, based on the Big Brother television franchise, in which 12 to 21 contestants live in an isolated house and compete for a large cash prize worth $171,428.57 equivalent to 60,000,000 Nigerian Naira, and other material gifts, at the end of the show by avoiding being evicted from the house by viewers. The first season of the show first aired on DStv Channel 37 from March 5 to June 4, 2006. The voting results were verified by the auditing company of Alexander-Forbes.

The first season of the show first aired on DStv Channel 37 from March 5 to June 4, 2006. In a twist to the game, two new contestants were introduced on Day 23, much to the excitement of the remaining housemates.

Ebuka, the most popular housemate for several weeks into the show and widely believed to emerge the winner was the seventh housemate to be evicted; many viewers blame the Joe’s Fan Club (JFC) for his eviction. Joe himself was soon evicted from the show.

Big Brother added another twist to the game on day 79 by cancelling the day’s scheduled nominations and making the housemates believe they will instead be evicted based on their performances on assigned tasks while in reality no more evictions were held and viewers began voting for the winner who turned out to be 26-year-old Katung Aduwak.

Why Are So Many Celebrities Wearing Red Threads? 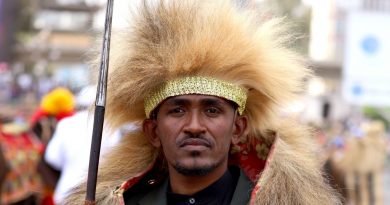 Haacaaluu Hundeessaa: A towering musician and an Oromo icon | Ethiopia