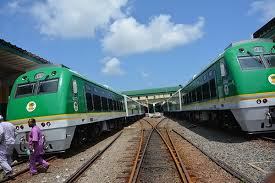 The towns, along with dozens of others serviced by the railway, were melting ports for all Nigerians, brought together by railway stations. The parents had roles in manning the railway installations. This fact reflects the oneness of Nigeria, years before the amalgamation of 1914.

Every background on the introduction and subsequent expansion of railways in Nigeria says “the first railway in Nigeria was opened in 1898, linking Lagos and Abeokuta, two years after its construction started in 1896. It expanded gradually to other parts of Nigeria.

President Muhammadu Buhari has now joined in the art of building railways in Nigeria, which was started by the British government. The railway started by the Lagos Government reportedly began operations in 1901 and was extended to Minna in 1911. Records indicate that, “it was linked to the Baro–Kano Railway that was built by the government of Northern Nigeria between 1907 and 1911.

The two lines were amalgamated in 1912.”
Railways in Nigeria, as is the case elsewhere around the world, serve many purposes. They facilitate the transportation of cargo in whatever shape: liquid, solid, light, heavy, bulky and even invisible, like gas.

Railways ferry human beings in cities, between cities and across national borders. I am privileged to have travelled from Kiev in Ukraine to Maldovia by sleeper train in 1990. I also had a train ride between Port Harcourt and Enugu. And from Enugu to Kano, although I disembarked prematurely in Zaria.

The way railways ferry goods and human beings in large numbers at relatively low prices is a major contributory factor to economic prosperity. Thus, railways support economic growth, encourage domestic trade and facilitate the mingling of Nigerians of varied backgrounds into a people sharing purpose and benefitting from each other.

Given the importance of railways and how they spread happiness, ideas, and encourage national integration, it is thrilling that Nigeria has resolved to not only modernise the railways, but to expand it to reach all state capitals and other principal cities in the country.

The Railways Master Plan, which will link all sea ports to the main economic centres of the country and the main international airports, will make Nigeria the hub of an efficient intermodal transportation network for the West Africa subregion.

It is because of the desire to achieve that regional hub status that the Railways Master Plan envisages taking it to the border towns in Cameroon, Niger and the Republic of Benin, respectively.

This subregional perspective as it concerns the Republic of Niger, was explained thus: “An agreement between Nigeria and Niger in 2015, coordinated by the Nigeria-Niger Joint Commission for Cooperation, has a plan for “Kano-Katsina-Maradi Corridor Master Plan, (K2M)”.

An informational document says it will be “a standard gauge railway line with an alignment of about 387 km from Kano to Maradi. It has a branch line from Kano to Dutse, capital of Jigawa state. Consequently, the northern region of Nigeria and the Southern part of Niger will benefit from an important connection to the Nigerian railway network under construction, and to Lagos and Lekki Port.”

The document explained further: “the design and construction of a single-track standard gauge rail line (with associated stations) between Kano to Maradi and a branch line between Kano to Dutse comprises Earth Works, Track Works, Signaling and Communication works, Depot, Stations and Rolling Stock Facilities.”

In breathing life into that Plan, the Federal Government of Nigeria led by President Muhammadu Buhari has awarded contract for the Kano-Dambatta-Kazaure-Daura-Mashi-Katsina-Maradi side of the project in the sum of $1.9 billion.

Going by this, the two nations would each build a rail track of the same standard to meet at Maradi, Niger. It will be the first railway tracks that will be constructed in the Republic of Niger. It will consolidate the huge economic, commercial and cultural ties between the two friendly nations.
An explanatory note issued by the Federal Government on the project emphasised that, “The objective of the rail is the harnessing of raw materials, mineral resources and agricultural produce.”

Crude oil from the Republic of Niger to feed a proposed refinery in Mashi, Katsina State, and the transportation of other cargo and people between the two countries, are additional reasons for doing the project. Fully justified.