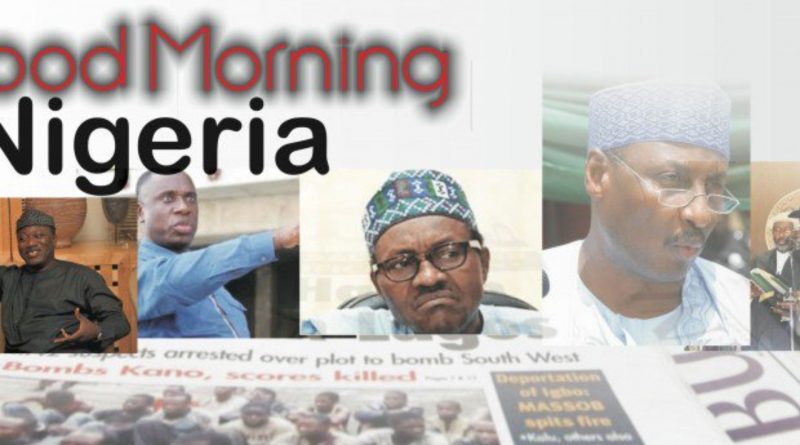 1. The Emir of Zuru, Major General Muhammadu Sani Sami, retired, (Sami Gomo II) has said politicians who could not win elections are the ones trying to break the country into pieces.

He said President Muhammadu Buhari should be harder on those politicians who want to destroy Nigeria, noting that evil people were doing everything possible to make Buhari fail by calling for the removal of the service chiefs.

2. The Peoples Democratic Party (PDP) has described President Muhammadu Buhari as a failure in the area of security.

PDP in a statement by the opposition party’s spokesperson, Kola Ologbondiyan, said Buhari should stop living in self-praise and denial because his administration had failed to provide adequate security for Nigerians.

3. The Arewa Consultative Forum, ACF, on Saturday, faulted the initiative of regional security outfits like Shege Ka Fasa in the North and Amotekun in the Southwest.

He made the revelation while speaking on the outcome of a meeting of the Attorney Generals from the South-West zone held in Ibadan, the Oyo State capital, on Friday.

Fapohunda said each of the Commissioners for Justice in the zone agreed at the meeting in Ibadan to insert a clause which empowers the Amotekun Corps to carry only licensed firearms in the bill for an act backing up the initiative.

The officers were said to have moved Collins from a guardroom at Mogadishu Barracks, Abuja, where he was being held to a bush near Ihejirika quarters along Abuja-Nyanya expressway where he was said to have been assaulted while in handcuffs and leg chains.

6. There was an explosion in the old secretariat of the Ekiti State Government, Ado Ekiti, Saturday morning as a suspected bomb went off next door to the governor’s office.

Report said the explosion brought down a building around the area and also affected a section of the state’s ministry of chieftaincy affairs.

7. The Supreme Court has dismissed an appeal to unfreeze several accounts linked to Sani Abacha, former head of state, in banks in the United Kingdom, Switzerland, Jersey, Liechtenstein and Luxembourg blocked by the federal government in 1999.

In the judgment prepared by Chima Nweze, a Supreme Court justice, the court held that the appeal which was filed in 2010 was “statute barred” (filed out of time).

8. The Independent Corrupt Practices and Other Related Offences Commission (ICPC) says it has directed security agencies to arrest Okoi Obono-Obla, former chairman of the Special Investigation Panel for the Recovery of Public Property (SPIP), wherever he is found.

Rasheedat Okoduwa, ICPC spokesperson, who disclosed this to journalists in Abuja, on Friday, said Okoduwa said Obono-Obla has resorted to spreading propaganda against the ICPC instead of turning himself in to clear his name.

9. Some fuel stations in Badagry have been shut after the National Union of Petroleum and Natural Gas Workers of Nigeria (NUPENG) suspended petrol distribution to the area.

Tayo Aboyeji, chairman of the south-west chapter of the union, on Saturday said that the suspension was due to harassment of its members by men of the customs and the army in the area.

The attack, according to the Chairman of Shiroro Local Government, Alhaji Suleiman Chukuba, took place at about 1:00p.m yesterday.