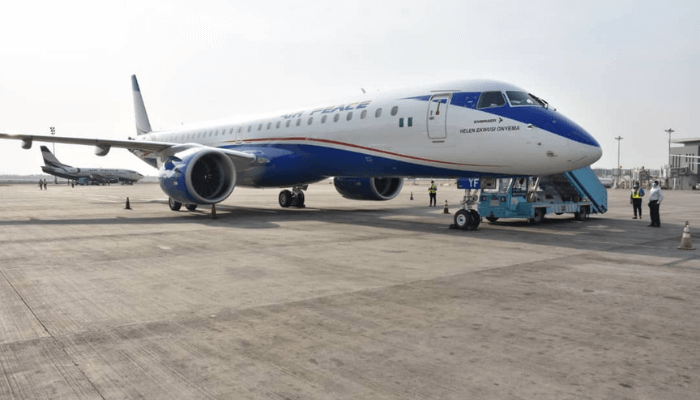 As Nigeria looks to leverage its population, geographical advantage, and growing middle class to boost the economy, research has shown that one of the viable ways to do so is through deliberate investment in the air transportation sector.

Experts have said that Nigeria’s population and geographical advantages alone are not enough to make the country an aviation hub for West Africa or Africa.

They, therefore, suggest that investment in the right fleet and development of airport infrastructures could put Nigeria in a position to attain the enviable position as ‘king’ of Africa aviation.

Nigeria’s aviation sector may not be so far from attracting the envy of other African countries as AirPeace, Nigeria and West Africa’s largest airline last week recorded a milestone as the first airline in Africa to take delivery of the brand new E195-E2 Jet.

Air Peace is the launch customer in Africa for the E2, the newest, most efficient, and most comfortable aircraft in the segment. The airline is also the global launch customer for Embraer’s innovative premium staggered seating design.

The jet delivered on Thursday last week is the first of 13 firm E195-E2 orders, with 17 remaining purchase rights, as announced in March 2019, and updated with three further firm orders from purchase rights announced at the Dubai Air Show in November 2019. The aircraft are configured in a comfortable dual-class arrangement with 124 seats.

Speaking about the aircraft type, Arjan Meija, the President/ CEO, commercial business aviation, Embraer, said “The E195-E2 tagged Profit Hunter aircraft will help Air Peace achieve its ambition of connecting not just all of Nigeria, but the whole of the African continent while feeding long-haul flights from their Lagos hub.”

Hadi Sirika, the minister of aviation, described the aircraft delivery by Air Peace as a step in the right direction.

Sirika said the bold step by the airlines aligned with the federal government’s road map for the aviation sector.

The Minister said the use of newer airplanes by Nigerian carriers will change the dynamics in airlines’ profitability and sustainability; by driving down maintenance and fuelling cost.

Allen Onyema, the Chairman and CEO of Air Peace, said the E195-E2 is the perfect aircraft to expand the airline’s domestic and regional operations.

“We are aware of the aircraft’s impressive economic performance as well as its unique configuration, the major reasons we placed an order for this aircraft. It is also a historic feat as Air Peace will be the first to operate this aircraft model in the whole of Africa.

“The E195-E2 aircraft will further help us actualise our ambition of connecting not just the whole of Nigeria, but the entire African continent while feeding long-haul flights from our Lagos hub. The acquisition will enable us to deliver on our ‘no-city-left-behind’ initiative, which is underpinned by our goal to reduce the air transportation burden of Africans, “Onyema said.

Air Peace already operates eight ERJ-145s and has said it will use the E195-E2s to enhance domestic and regional connectivity. The E2 is able to achieve this both affordably for passengers and profitably for the airline, along with delivering a superior travel experience.

This enhanced network will also help feed and sustain long haul operations at the Lagos Hub, such as the UAE route launched in 2019 and South Africa launched in December 2020.

John Ojikutu, aviation security consultant and Secretary-General of the Aviation Safety Round Table Initiative (ASRTI) commended the airline on its new aircraft acquisition, noting that Air Peace has taken a bold tactical step which all the domestic airlines needed to have taken in their various business plans for their operations.

“Using aircraft with lower capacity on routes that are one hour or less will remove unnecessary delays and cancellations for reasons of load factor and reduce the turnaround time for more flight frequencies.

“These are the aircraft the Nigerian private airlines need for the domestic and regional routes they can dominate, thereby reducing the incursions of the foreign airlines into what should be exclusive theirs,” Ojikutu said.

The Airline’s success in six years

No doubt, AirPeace has not only recorded several successes in six years of its operations as it has grown to become the largest airline in Nigeria and West Africa in such a short period of time.

Seyi Adewale, Chief Executive Officer – Mainstream Cargo Limited acknowledged that Air Peace Limited has grown to become the pride of the Nigerian skies in its six years of operations.

“It’s instructive to note that a wholly Nigerian owned company can achieve great feats within six years. Air Peace has evidently proven a strategic thinking board of directors and management, passion for excellence and deft maintenance and aircraft replacement and acquisition methods,” Adewale said.

The airline also boasts of a fleet size of 27 aircraft and is steadily expanding its fleet as it expects to take delivery of more Embraer 195-E2 aircraft in 2021.

As Nigerian carriers continue to acquire better and newer aircraft for domestic, regional, and international expansion, Air Peace is at the forefront of this as it has tactically drawn out plans to consistently expand its fleet size to feed local, regional and international routes.

The airline has spread its tentacles to meeting international travel demands helping to restore the pride of the nation with Lagos-Dubai operation and Lagos-Johannesburg operations.

Air Peace which operates the West coast regions has also been able to sustain Sharjah operations (UAE route). The airline which commenced the Dubai route in July 2019, is shaking up competition on the route. High-end airlines that had operated on the routes for years have had to crash their prices since Air Peace provided relatively cheap fares for Nigerian passengers.

AirPeace operates three times weekly to Sharjah; Tuesdays, Fridays, and Sundays, from Murtala Muhammed International Airport (MMIA) Lagos. With the commencement of operations on this route, Air Peace is offering travellers from Nigeria the opportunity of connecting 23 other destinations from the United Arab Emirates.

Seyi Adewale told BusinessDay that the growth and effective development of Air Peace Ltd reveals that the airline business in Nigeria can be successfully and profitably managed.

Adewale said this is the confidence-building platform (or indeed template) that bankers, investors, intending promoters can latch on to build a more robust sector.

He noted that there are always risks in business and aviation is not exempted, however, the successes of Air Peace Ltd assures intending airline investors that Nigeria with 36 States, over 200 million (youthful) population, clearer government policy, and the best stock exchange in Africa assures interested parties that Nigeria is worth taking a second look regarding investing or promoting the sector.

Playing the supposed role of the national carrier

Allen Onyema reiterates that starting the airline was to create employment and not necessarily make money.

He disclosed that with the firm order of 13 Embraer 195-E2 aircraft, which will be delivered in batches, will create over 8000 jobs for Nigerians.

Already, Air Peace is the highest employing carrier in Nigeria, creating over 5,000 direct and indirect employments; playing the role of a national carrier.

In addition, the airline’s repatriation of several Nigerians from South Africa at no cost to the returnees or government continues to receive commendations from Nigeria and outside the country.

Air Peace played the supposed role of the national carrier in the evacuation of several stranded Nigerians in South Africa as a result of the xenophobic attacks. The airline spent over N300 million to carry out the evacuation.

Quest explained that the country does not need the government to start an airline; rather he suggested that investors in Nigeria can put their own money into an airline.

“South African Airways is a good example of an airline that is in deep financial trouble that you have to question its right to exist. It has so much government’s money poured into it and it has failed to turn profitable. Eventually, you have to say this thing will never be profitable, close it down,” he said.

Experts say the existence of national carriers in any country is often necessitated by the need to reciprocate air traffic in a situation where there are no capable local carriers, the need to represent the country in other climes, and a need to create employment opportunities.

Tayo Ojuri, the chief executive officer of Aglow Limited, an aviation support services company said in a situation where all these factors are met by operating local carriers, it may be questionable to set up a national carrier, especially in a country that is currently facing an economic downturn and battling with basic needs such as basic health care, housing, electricity, and good roads, amongst others.

Experts have suggested that the government should rather support indigenous airlines to survive and grow, so they can represent the country.

Stakeholders in the aviation sector have said that without the support of the federal government through policies and concessions for airlines where necessary, domestic airlines may not survive in the market.

Allen Onyema, commended President Buhari for his support, noting that he is the reason his business is booming.

“The president approved zero pay duty on imported aircraft, zero VAT on imported aircraft, and gave all the airlines loans. We have never had it this good in Nigeria. I bought 13 brand new planes and they are coming in. I wouldn’t afford them if Buhari didn’t put the policies. We have an enabling environment to do business,” Onyema said.

Stakeholders have however called on the government to look into certain policies that have been responsible for failures of airlines such as the multiple charges paid by the airlines.

Roland Iyayi, the chief executive officer of Topbrass Aviation had said that some airlines fail because the environment in which they operate is extremely harsh and not conducive for growth.