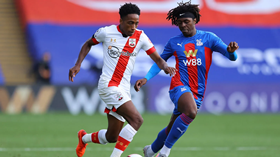 Eberechi Eze was among the seven substitutes as experienced Crystal Palace coach Roy Hodgson named his first team sheet of the 2020-2021 season against Southampton on Saturday evening.

With 79 minutes gone, the England U21 international of Nigerian descent stepped out on to the Selhurst Park turf with the number 25 on the back of his jersey for his Crystal Palace debut, replacing Jeffrey Schlupp in the process.

Eze was comfortable on the ball and showed glimpses of his silky skills in his first ever appearance in the top-flight, as highlighted by Kyle Walker-Peters falling to the deck when he tried to stop the winger’s run.

With Eze being heavily courted by the Nigeria Football Federation to play for the Super Eagles, several Nigerian fans ran the rule over the former Queens Park Rangers star and were clearly impressed by his performance, taking to social media to praise him during and after the game.

Here’s what Nigerian fans are saying on Twitter about Eze :

@ArowojoluTolu : “Eze with a decent 15mins of play”.

@opemists : “NFF need to apply pressure to get Eberechi Eze for the Super Eagles”.

@Errytage : “This is Eze guy playing for @CPFC is a fine a player, I hope he will have a successful career over there”

@GodwinOdiko : “If I were the NFF president, I’d be having sleepless nights until Nigeria is able to cap Ebere Eze (before his stock rises). The guy has got the potential to break into one of them top teams in the nearest future. Wise to act now.”

@SLKomedy : “Omo I’m so happy Eze is playing in the premiership this season….baba sabi dieeeee!! Always a joy to watch”.

@Okoye_val : “Eze is effortlessly skillful, so smooth with his dribbles, very entertaining player to watch”.