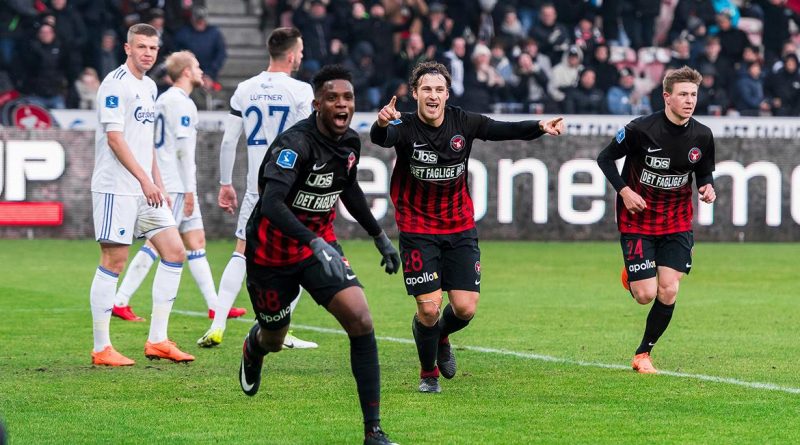 Sport
June 9, 2020June 10, 2020 Stan 0 Comments
LinkedInFacebookTweetPin
LiveChat will greatly increase the number of your satisfied customers. I've already tried it and I can recommend it as a go-to customer service tool! Sign up today for a free trial!

The central/defensive midfielder department is currently one of the strongest areas in the Super Eagles team, with the likes of Wilfred Ndidi, Joe Aribo, Ramon Azeez and Oghenekaro Etebo among the options available to Gernot Rohr.

These players have established themselves in the national team, but they could soon have a new rival who goes by the name of Frank Onyeka.

Onyeka is currently playing with FC Midtjylland in Denmark, and his performances have earned rave reviews from Danish pundits.

Onyeka was born on January 1st 1998 in Lagos and started his career with FC FC Ebedei- A local club based in Ijebu-Ode Ogun State.  He left Ebedei in 2016 to sign for Midtjylland, playing for the club’s U-19 team.

However, after just a year with the youth team, he was promoted to club’s first team.

How Has He Fared Since He Joined Midtjylland?

In his first full season at the club, he made just six appearances in the Danish top-flight. The following season (2018/2019), he featured in twice the games he played in his first season.

He also made his Champions League debut in a qualifier against FC Astana, while he also featured three times in the Europa League qualifiers.

What About This Season?

While he was a bit-part player in his first two seasons, Onyeka is now a regular in Brian Priske’s side with 23 starts in the Superliga and 24 appearances in total.

He plays exclusively as a central midfielder, but he’s also played as a defensive midfielder and a right midfielder, which shows his versatility.

What about his performances this season?

The 22-year-old is one of Midtjylland’s best players this season and has received praises from Danish press.

According to sofascore, Onyeka has a pass accuracy of 84% with 78% coming in the opposition’s half.  He’s scored three goals from his central role this season although he needs to work on his final ball as he is yet to provide a single assist.

His ability on the ball is also good as he has a 71% dribble success rate, according to Sofascore.  Even in some of the games that Midtylland lost this campaign, Onyeka’s performance was singled out for praise.

In Midtjylland’s loss to Horsens at the beginning of June, the 22-year-old was the only player that received A1 score in Target’s scouting ratings.

According to the report, Onyeka was impressive in his role and performed his defensive duties very well, while he also covered a lot of distance.

The final remark on him read: Onyeka looked like a strong player at this level and has the physical attributes and defensive skills to be a solid defensive midfielder at a higher level.

He was also praised by Danish football expert Karsten Krough in The Wolves away win at Nordsjaelland on Sunday.

In his analysis, Krogh praised Onyeka’s dominance in the midfield and said it’ll be a surprise if no club comes for him this summer.

It’s too soon to say he’ll get a call-up, but if he stays consistent and earns a move to one of Europe’s top leagues, then he’ll be on Gernot Rohr’s radar.

Just like the famous saying which states “nothing like too much money”, there’s also nothing wrong in having so many talented players in a team, and his emergence will only be a good problem for Rohr.