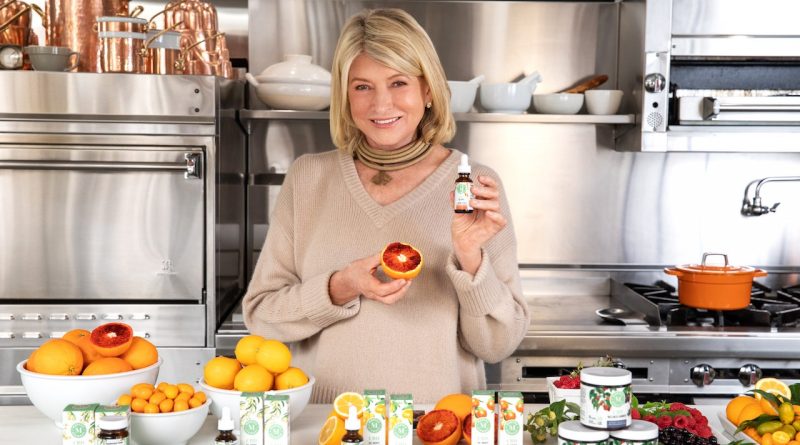 Citrus sorbet or French-style confections with kumquat, huckleberry and Meyer lemon are some of the ways Martha Stewart fans can now consume CBD.

On September 10, the lifestyle guru launched her Martha Stewart CBD wellness line in partnership with Canada-based CBD company Canopy Growth Corporation. Sold online through Canopy’s site, the collection of flavored oils, softgels and gummies is very on-brand for Stewart. The products are inspired by French pâte de fruit as well as baked goods including blood-orange cheesecake, berries and cream tartlets. Stewart, at age 79, joins a growing number of CBD brands taking aim at the Boomer demographic.

“For Martha, I think one of the things she does for us most specifically, is give permission to people who are interested in the category, but also very intimidated,” said Sol Clahane, vp and U.S. managing director of Canopy Growth. The Martha Stewart branding helps to remove any stigma associated with CBD among older generations. She also conveys safety.

“With almost 3,000 [CBD] brands out there in the market, there’s a lot of bathtub concoctions that really give people pause,” said Clahane. “People trust Martha, and they trust her brand.”

Sales have “exceeded our expectations” since the launch, said Clahane, with Canopy having its largest sales day in the history of the company when a September 17 New York Times profile of Stewart’s lifestyle in quarantine while “blissed out on CBD” mentioning her brand went viral.

The brand’s target demographic of females between the ages of 45-65 encompasses both Boomers and Gen X, but Clahane noted that Stewart has been successful at resonating with a younger demographic in recent years, too.

“The fact of the matter is, she is probably one of the most iconic and hip people right now,” said Clahane. “Martha Stewart’s reach is way beyond her current targeted market description. I think she’s got great appeal.” This is thanks to a variety of factors, including her TV show “Martha & Snoop’s Potluck Dinner Party” with Snoop Dogg, who is credited with introducing her to Canopy in the first place. She has also had many viral social media moments over the years, with the most recent one in quarantine involving her “thirst trap” pool selfie. “She’s a rock star,” said Clahane.

Boomer interest in CBD is particularly on the rise, with a report by CBD Marketing finding in 2019 that Boomers post about CBD on social media just as often as millennials. Other celebrities in the demographic have also gotten on board with CBD. Willie Nelson and golf legend Greg Norman also have their own CBD brands, while Jane Fonda became a spokesperson for Uncle Bud’s in May. Stewart’s CBD brand joins a growing number of companies geared toward an affluent female demographic, as upscale CBD brands find a home on platforms like Fleur Marché, which sells products including gummies and skin care. Canopy also offers beauty products under its This Works brand in its portfolio. Martha Stewart CBD prices range from $35-$45 a bottle.

Surfside, a provider of advertising and data solutions focused on the cannabis industry, reports that the age group of 45-54 has the highest number of CBD consumers, followed by the 55-64 range. It also reported that a member of the 45+ age group is 39% more likely to be a CBD consumer than they were a year ago.

Martha Stewart’s lifestyle brand will be a significant platform for reaching this demographic, with plans to include CBD-focused lifestyle features such as recipes in her magazine. This is especially helpful as the older generation’s top social platform, Facebook, has regulations in place around advertising of CBD.

According to CBD Marketing, Boomers’ interest in CBD is focused on “healthy aging,” including benefits for skin, muscles, joints, eyes, heart health, digestion and memory. Marketing CBD to Gen X, meanwhile, is most successful when it focuses on “convenience, taste and use in everyday meals,” according to the firm’s analysis. The brand’s Instagram has begun making food recommendations: one post suggests “adding Meyer Lemon oil drops to a citrus-flavored sorbet.”

The lure of the Martha Stewart brand, which has been successful at selling bed linens and housewares at retailers in the past, is also helping to open retailers’ minds to CBD.

Clahane noted that there are some “retailers that have taken a position not to bring in any CBD products until there’s more guidance,” with regard to regulations. “But for those that are more progressive, and recognize the absolute growth and the consumer demand, we’re approaching those retailers and we’re getting very, very good response.”

While CBD has an 86% awareness rate, according to Canopy’s market research data, Clahane said the market is still in its “infancy.” Only 18% of its survey respondents have tried CBD, but the company projects it will be a $10 billion industry by 2023. Cannabis industry research firm BDSA predicts it will be worth $16 billion by then, while Brightfield Group estimates a value of $12.4 billion. Clahane notes that Martha Stewart’s brand, with more products in the pipeline, will help widen the reach of CBD.

“We’re very much thinking of ourselves as a CPG company, not a CBD company,” she said. “That’s what separates us from many of our other competitors. It gives us a lot more of a white canvas to paint and really drive innovation, and engage with consumers in and out of the category.”