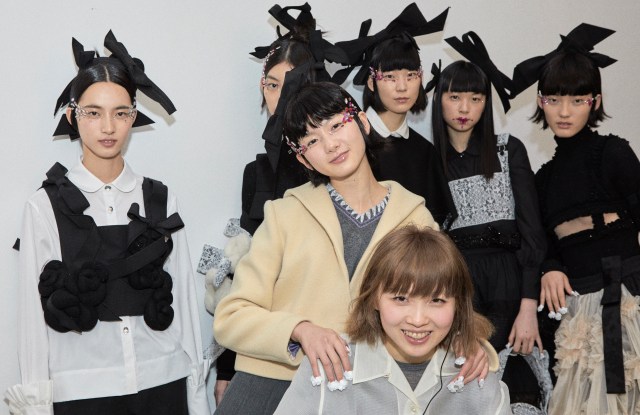 
LONDON — The brand Märchen, founded by Central Saint Martins alumni Chen Mei, is a bit of a legend among fashion retailers and emerging designers in China.

A silk dress from the brand went viral on China’s social commerce platform Xiaohongshu and almost became the uniform for the platform’s influencers in 2018. It’s estimated that around 10,000 units of that dress have been sold so far, at 4,790 renminbi, or $733, each.

According to Chen, the dress went viral because its asymmetric A shape fits into China’s fairy-tale dress trend, and flatters Chinese women’s body shapes. It creates dramatic volume when moving, yet looks “girl next door” enough when standing still. The relatively affordable price point also allows Chanel and Hermès bag-carrying consumers to buy into it with little hesitation. 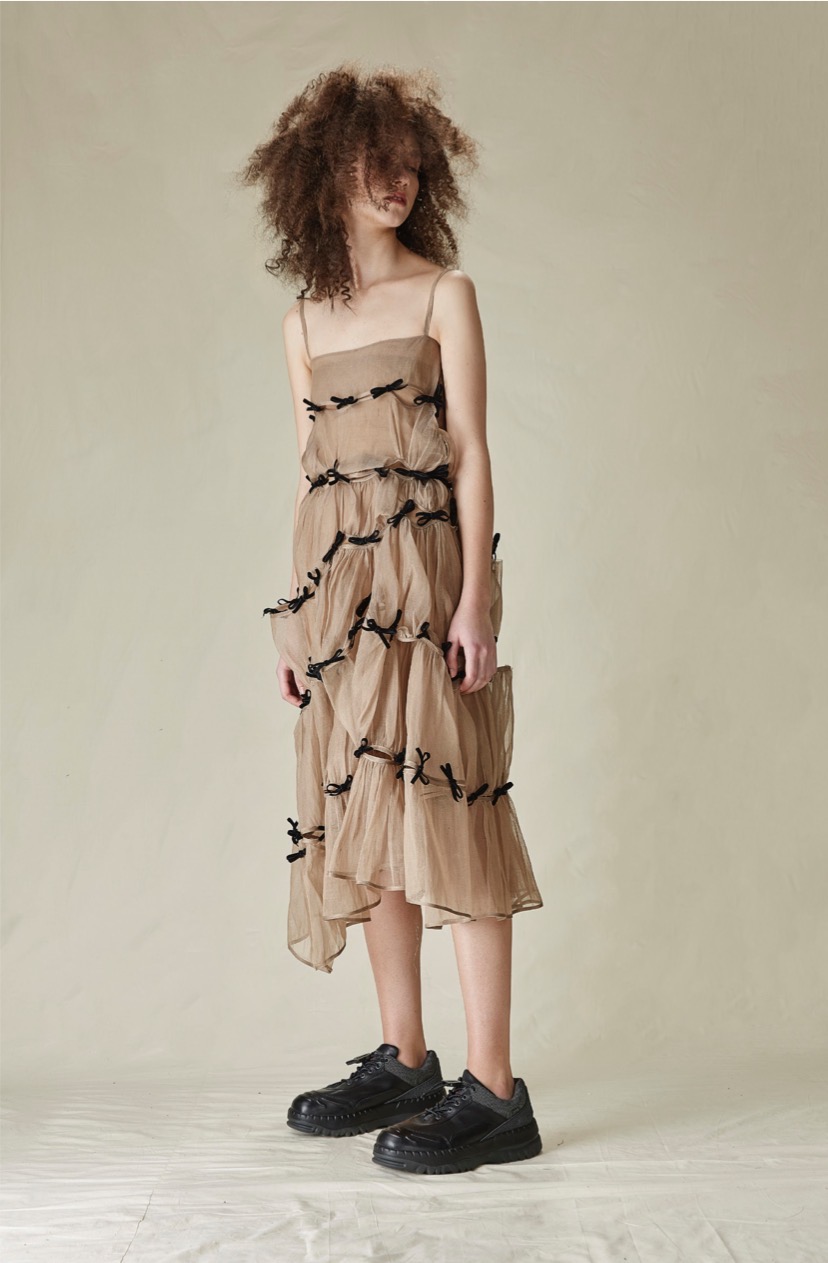 Since then Märchen has built a cult following and continuously been one of the best-performing brands among its China stockists, such as SND in Chongqing, Dong Liang in Beijing, and Le Monde de SHC and Labelhood in Shanghai.

Dong Liang was the first to carry the brand in 2015. The store’s founder Charles Chen told WWD that he committed to Märchen instantly because it came with a natural, strong and fully formed narrative from the beginning.

“You can tell the designer has good taste. Also since she studied textiles at CSM, her requirements for fabrics are quite high. Even as lots of brands tried to copy her, she is always one step ahead of the game by introducing new and unexpected textiles and techniques every season,” he added.

Will Zhang, founder of SND, said he has been working with the brand since its second season, and Chongqing’s affluent consumers ages 18 to 25 are particularly fond of Märchen’s signature items, such as a midi skirt with bows, a wool pleated skirt and that famous silk dress.

Now the seven-year-old, Shanghai-based label aims to expand beyond China with a fall 2021 collection that features updates on Chen’s bestselling pieces with a more subversive take on femininity, and a ballgown with a staggering price tag of 250,000 renminbi, or $38,276. 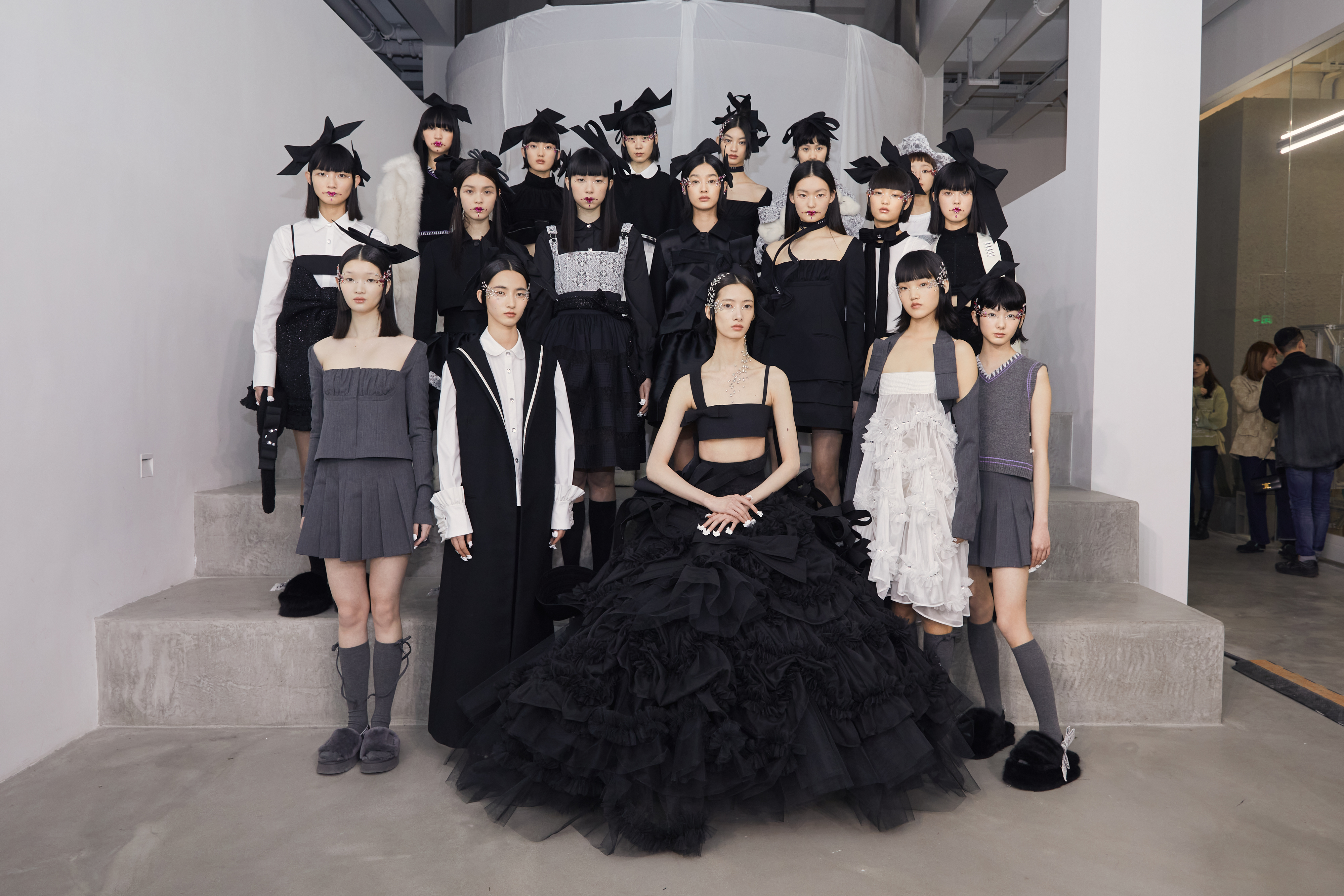 “I got so many inquiries about that dress after the show,” Chen said. “When I told them about the price, which was based on how many hours my team spent on it, many still think that it’s rather reasonable. My team spent two weeks making that dress and was still adding various sizes of bows and organzas onto it hours before the show started.”

Chen said she was still not satisfied with the final version but was glad to hear from an industry leader who she admires that “this is the most decent ballgown Shanghai has ever seen.”

While the dress drew lots of interest, the designer said she won’t make another one unless under extreme circumstances.

“I hold a very high standard on my products. With my current small team, it’s illogical for me to produce an art piece like this in mass quantity. I will consider expanding into this category when I have my own store, and a proper atelier to serve my customers,” she added.

Chen added that since all her team members are “control freaks” — and even though the brand is paying more for experienced machinists at factories to handle the production — the studio will do an extra round of quality checks before garments are sent to stores or customers. 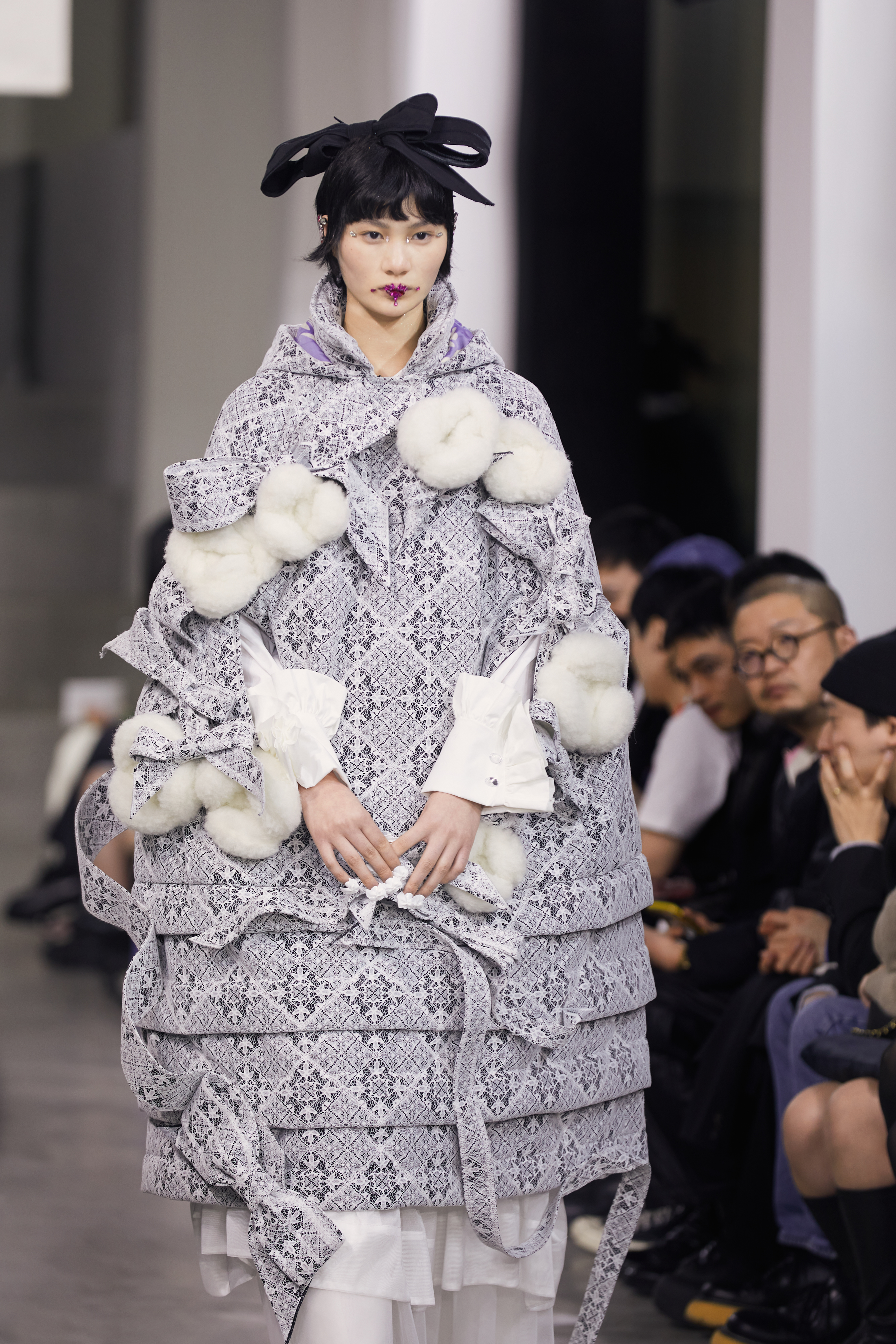 Tasha Liu, founder of Labelhood, told WWD that Märchen is able to find success even without doing shows because Chen truly understands what customers want.

“She understands the most delicate heart of a girl. For example, the pattern of a dress will be changed many times before production to adapt to the body shape, to show the right body parts, and cover the parts that a girl feels most insecure about. Her design lets the wearers feel that they can instantly turn from an ordinary girl into a superstar,” she said.

“What’s more interesting is that the image Märchen presents is very complex and multilayered. Her girly design has a sharp undertone, and she keeps pushing the boundary of dressmaking and keeps adding new techniques and innovations into her design,” Liu added.

“Chen knows how to create a ‘Märchen cult’ on social media. Not only does she demonstrate what a Märchen girl is, but there are also a lot of fashionable girls with unique tastes and huge followings to exemplify her brand. You can instantly recognize a Märchen girl when you see one. They all follow Chen’s unique style, hair color and makeup. It’s very interesting, no other brand in China does this,” he said. 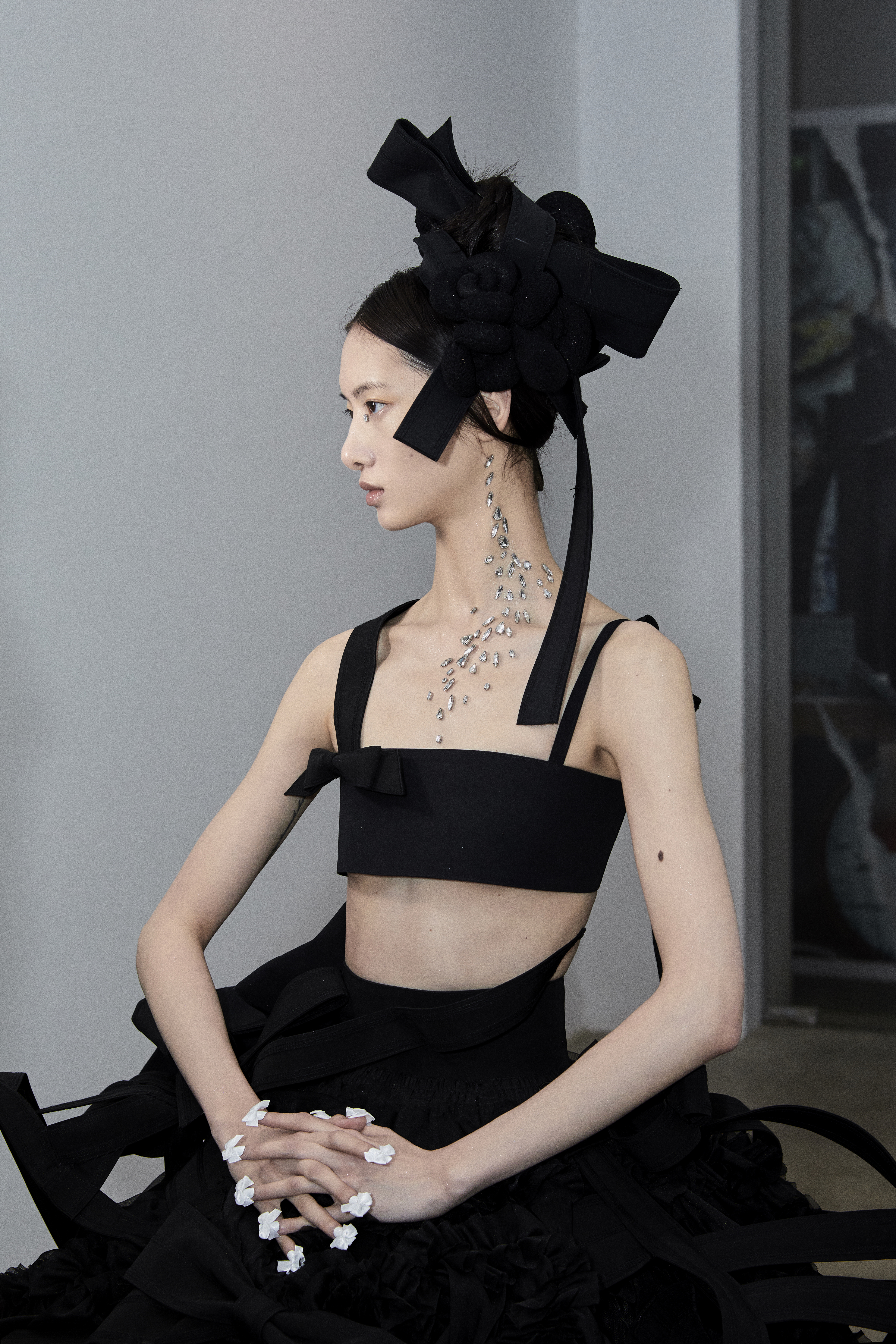 A close-up of the final look from Märchen’s fall 2021 collection.
Courtesy

Born and raised in Fujian, Chen became interested in fashion in middle school.

“I went to a boarding school. So many of my classmates, who are children of Hong Kong businessmen, carried Vuitton bags for class. Also, Fujian was a big fashion manufacturer hub, so there were lots of international fashion magazines around,” she said.

A big fan of John Galliano, the first luxury item Chen ever acquired was a pair of Dior earrings her cousin bought her in Singapore.

In high school, Chen was going to apply to study architecture at China’s prestigious Tsinghua University, but a terrible breakup eventually led her to CSM.

“My London life was pretty glamorous in the beginning, going crazy on shopping. But then something happened to my family, and all of a sudden I was washing dishes in restaurants to put myself through university,” Chen said.

Upon returning to China after graduation in 2014, Chen never thought she would launch her own brand. She was at an office job while doing freelance work for a Japanese textile company on the side.

“The Japanese company sent me lots of fabric samples, so I used them to create a capsule collection. Luckily Dong Liang’s Charles saw my work on WeChat, and soon I received my first order,” she said, adding that she randomly came across the word Märchen, which means “fairy tale” in German, and since it sounds like her name in Chinese pronunciation, she chose it as the brand name.

In 2016, Märchen made its Shanghai Fashion Week debut with Labelhood. Chen spent all her savings on the show, but received little attention afterward.

“It was the moment I realize that I have to build up a business first, before spending money on marketing and promotion,” Chen said. “I have nothing to fall back on to. I am not like the other Chinese designers who come from wealthy families. After the incident, my family can no longer support me if I don’t make this work.”

It’s also around that time that she recruited some very helpful team members, and together, they developed the silk dress in 2017. More than 1,000 of the first edition of the dress sold out very quickly. Soon after, they updated the dress with more decorations and better techniques and introduced the second edition to the market.

The next year, Chen found out that the dress was trending on Xiaohongshu, and thanks to its viral popularity, the company became financially secure.

Chen said Märchen last year clocked an increase of more than 50 percent in total revenue, and she believes the brand is finally ready to move on to the next stage and let the world see that there is one more brand from China that the global fashion community needs to watch out for.

In the future, Chen wants the brand to create a universe of its own, where everything is designed with the same standard and cited Rei Kawakubo’s Comme des Garçons as a point of reference.

“I want to make uniforms that 50 percent of the population can appreciate and wear, whether it’s a T-shirt, skirt, blazer, or coat. Most of them will be sold at an approachable price point. Even those who don’t buy my design often, the one thing that they have will leave them a good lasting impression,” she said.

“Buying into Märchen is like going on a date. When they spend money on you, you want to leave a good impression, so that they want to ask you out again, and eventually go into a committed lifelong relationship,” Chen added.