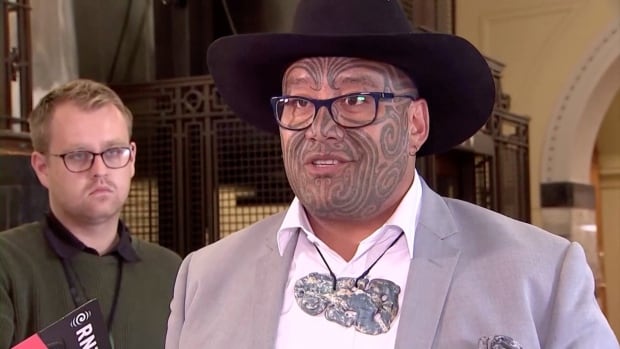 The Maori MP who was ejected Tuesday from New Zealand’s parliament for not wearing a necktie has been successful in throwing out the dress-code requirement to wear what he calls “a colonial noose.”

Rawiri Waititi, co-leader of the Maori Party, confronted the issue on what was the first day parliament sat in 2021, making several attempts to address the chamber before house speaker Trevor Mallard removed him.

Along with a jacket and collared shirt, Waititi wore a Maori pendant around his neck in place of a western-style necktie.

The standing committee in charge of parliamentary procedures, including dress code, met late Tuesday to discuss the matter, Mallard said on Twitter.

As Speaker, I am guided by the committee’s discussion and decision, and therefore ties will no longer be considered required as part of ‘appropriate business attire’. I acknowledge those who felt this was an important issue worthy of further consideration. [/thread]

The standing order was rescinded in parliament Wednesday morning.

Waititi told The Current host Matt Galloway his stand against the necktie is about far more than a simple dress code.

The dress code, established in the Standing Orders of the House of Representatives published in 2003, outlines a requirement to wear “appropriate business attire.”

But Waititi said his clothing meets that standard without a western necktie.

“There’s many, many of us Indigenous peoples who now own businesses,” said Waititi, who operates two consultancy businesses as well as a family farm. “And there’s nothing specifically telling us what is the standard business attire. So for Maori, what I was wearing is appropriate business attire.”

Dissapointing the Speaker has set one precedent for some members of but not for everyone. Being told to leave the house because of my choice to wear hei-tiki as cultural business attire is absurd.

Until now, the business attire baseline has required men to wear a jacket and tie, a matter that Mallard said he surveyed members about late last year. The standing orders outline no equivalent requirements for women or non-binary members, other than to say “the Speaker will take issue with any member who is not dressed in appropriate business attire.”

In a February 1 memo Mallard sent to MPs he wrote that “a significant majority of respondents opposed any change to dress standards for the Debating Chamber.”

“Business attire, including a jacket and tie for men, remains the required standard dress code,” he wrote in the memo shared on Twitter.

That decision has now been reversed.

The country’s prime minister, Jacinda Ardern, told reporters Tuesday “I don’t think New Zealanders care about ties” and that she didn’t object to the members not wearing them in the chamber.

Speaking to Galloway Tuesday before the tie requirement was thrown out, Waititi shared why he has touted the necktie as “a colonial noose.”

“When you’re forced to put something around your neck and tie it there to acknowledge a very westernized attire, and something that has been brought from England to New Zealand, and you force the Indigenous people to wear it, it does feel like a colonial noose.

“I made reference in my maiden speech to an ancestor of mine who was wrongfully accused of a crime and hung. Before they hung him, he uttered the words, ‘take the noose from around my neck so that I may sing my song.’ And while I refer to a tie as a colonial noose, it is time for us to start singing our own song, from our own song sheet, from songs that are composed by our people, and not singing the song and beating the drum of the colonial oppressor.”

New Zealand parliament has indicated willingness to make room for cultural diversity in the past. “In 2017 there were amendments made to the standing order where clothing of cultural significance was also accepted. So again, we’re getting mixed messages in that particular space,” said Waititi.

Waititi is one of two Maori MPs who have the sacred facial tattoos called moko kauae. The other, Nanaia Mahuta, is the first woman and second Maori person to become foreign minister.

In fact, New Zealand’s parliament is one of the most diverse in the world, with 48 per cent women, 11 per cent of LGBTQ, 21 per cent Maori, 8.5 per cent Pacific Island-New Zealanders and seven per cent Asian-New Zealand members.

This is going to make huge inroads for our people and for the many generations ahead of me to ensure that they are not to be treated like second-class citizens in their own country anymore– Rawiri Waititi, Maori MP, New Zealand

Saying his aim was not to take a wrecking ball to colonialism but rather to dismantle it brick-by-brick, Waititi said that establishing his ancestral adornments as appropriate attire for parliament is an important step.

“This is going to make huge inroads for our people and for the many generations ahead of me to ensure that they are not to be treated like second-class citizens in their own country anymore.