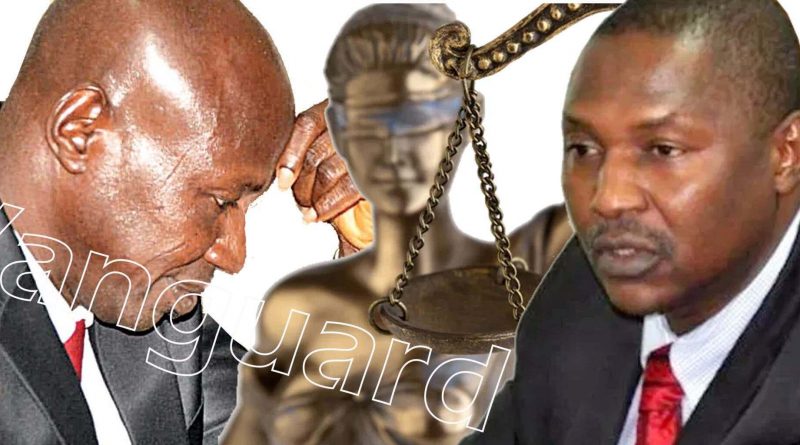 The suspended Acting Chairman of the Economic and Financial Crimes Commission, EFCC, Mr. Ibrahim Magu, has applied for the Attorney-General of the Federation and Minister of Justice, Mr. Abubakar Malami, SAN, to be summoned before the Justice Ayo Salami-led panel of inquiry, to give evidence as a witness.

Magu, who is facing probe over allegations bordering on abuse of office and mismanagement of Federal Government Recovered Assets and Finances from May 2015 to May 2020, applied for Malami to be compelled to appear before the panel to give evidence and tender a copy of his memo to President Muhammadu Buhari, which led to his suspension as EFCC Chairman.

In the application dated September 4 and signed by his lawyer, Mr. Wahab Shittu, Magu, specifically applied for Subpoena Duces Tecum and Subpoena Ad Testificandum to be issued on Malami who he described as his “main accuser”.

Magu’s fresh application to the Salami-led panel of inquiry sitting at the Presidential Villa, a copy of which was sighted by Vanguard on Monday, read:

“Kindly cause to be issued a Subpoena Duces Tecum and Subpoena Ad Testificandum on Mr Abubakar Malami SAN, The Honourable Attorney General of the Federation to give evidence, and tender relevant documents on behalf of the State concerning his memo to the President against Mr Ibrahim Magu, The Acting Chairman of EFCC, the subject matter of this inquiry titled “FLAGRANT ABUSE OF PUBLIC OFFICE AND OTHER INFRACTIONS COMMITTED BY MR. IBRAHIM MAGU, ACTING CHAIRMAN ECONOMIC AND FINANCIAL CRIMES COMMISSION (EFCC) BEING EXTRACTS OF PENDING PETITIONS”  in these proceedings.

“The HAGF is expected to give evidence on his allegations against Ibrahim Magu,  to wit: ‘The Acting Chairman of EFCC is not acting in the overall best interest of the country and the policies of this administration due to its Mismanagement and Lack of Transparency in Managing Recovered Assets; Diversion of Recovered Assets for Personal Enrichment; Neglecting to Investigate the P&ID case  as directed by the President;

Flagrant Disobedience to Directives and to Court Orders due to the following; Final Report Of The Presidential Committee on Audit Of Recovered Assets (PCARA): Mismanagement and Lack of Transparency in Managing Recovered Assets”.

The suspended EFCC Chairman relied on Section 5(c) of the Tribunals of Inquiry Act 2004, which he said empowered the tribunal to summon any person in Nigeria to attend and give evidence or produce any document or other thing in his possession and to be examined as a witness.

“Summonses issued under this paragraph may be in Form A in the schedule to this act and shall be served by the police or by such person as the members may direct”, he noted, adding that under Section 6 of the Tribunals of Inquiry Act 2004, Justice Salami as Chairman of the panel, has the power to sign the subpoena to be issued on Malami.

According to Magu, “In the referred memo widely circulated in the social media which triggered these proceedings”, Malami, equally alleged that he was involved in the mismanagement of recovered assets and diversion for personal enrichment.

He said some of the allegations Malami raised against him in the memo to President Buhari, included that: “The Acting Chairman has also neglected and refused blatantly to comply with the Regulations on the Management of Recovered Assets, 2019.

“The Acting Chairman does not want a proper and transparent procedure for the management of assets as directed by your Excellency through me”.

Magu said he believed that consistent with the fundamental principles of fair hearing as guaranteed under Section 36 of the constitution of the Federal Republic of Nigeria 1999, he is entitled to confront Malami before the tribunal.

“Based on the foregoing, we humbly request that the Honourable Attorney General who is the main accuser in these proceedings be graciously invited to give evidence in connection with the subject matter of this inquiry with specific reference to our client in the interest of fair hearing.

“We believe this request ought to be resolved before our client is called upon to enter his defense in these proceedings”.

More so, Magu also requested the recall of several witnesses that appeared and testified before the panel at the time he was not allowed to participate in the proceedings.

He said there was a need for him to be allowed to cross-examine such witnesses, especially in view of the extensive scope of the terms of reference of the probe panel.