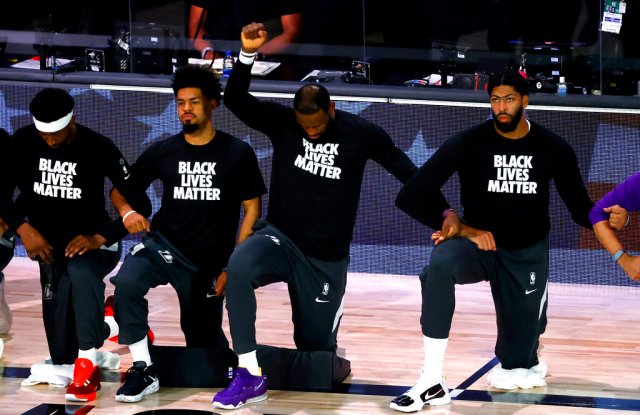 
Pro basketball players have in the last few years been among the most fashionable and emulated clothing influencers. Now they want to turn that influence into activism.

Members of the NBA were swift last summer in their responses to racial unrest in the wake of the unjust killings of George Floyd, Breonna Taylor and many others from police brutality.

While playing in the Orlando “bubble,” a self-contained sports center where the teams lived to finish out the season that had been paused because of COVID-19, players quickly donned apparel and jerseys with sayings like “Say Their Names,” “Respect Us” and “Do You Understand Now?” emblazoned on them. The Los Angeles Lakers wore red caps in the style of then-President Donald Trump’s MAGA hats that read “Make America G̶r̶e̶a̶t̶ ̶A̶g̶a̶i̶n̶ Arrest the Cops Who Killed Breonna Taylor.”

Calyann Barnett, stylist to the Utah Jazz’s Donovan Mitchell and retired All Star Dwyane Wade, among others, said part of the clothing’s impact, which is generally photographed when the players walk down sports arena tunnels to the locker room and then disseminated on social media, actually comes from the lack of dialogue.

“It’s not, ‘I’m going to tell you what I feel and then you go back and forth with me.’ It’s, ‘This is me sending my message to you and I don’t need to hear what you have to say.’ Colin Kaepernick lost his job because of [protesting racial injustice] and there was so much conversation about it when there shouldn’t really be a conversation about Black lives mattering.” 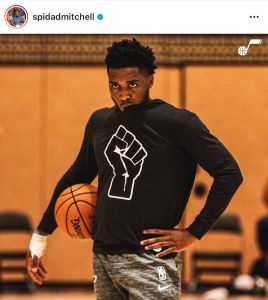 Kaepernick, then a quarterback for the San Francisco 49ers, sat and kneeled during the National Anthem for the entire 2016 season to protest against police brutality, in what would become one of the most polarizing acts of athletic activism in history. That season was also his final year as a professional football player, although he remains an active free agent. Kaepernick now has a multimillion-dollar contract with Nike, where he appears in ads and videos calling for social justice. His 2018 ad campaign’s tag line was “Believe in something. Even if it means losing everything.”

Acknowledging a shift in response, even as America discouragingly remains embattled in many of the same issues it was when Kaepernick took a knee five years ago, Barnett says of last summer that, “This is one of the first times in history where an athlete could really speak out and get support from the league and get support from the fans.” Approval for Kaepernick and the right to kneel during the anthem grew in the wake of last summer’s protests.

Chris Paul, a leader in the NBA and president of the Player’s Association, was among the players on a call with former President Barack Obama after a walkout of the bubble in protest of the near-fatal shooting of Jacob Blake, who was shot in the back eight times by police in Kenosha, Wisc., as he opened a driver’s side door last August. Determining whether the season should continue, the former president encouraged the athletes to continue using their platforms and demanding action from the league, including turning arenas into voting stations and create ad spots that promote “greater civic engagement in national and local elections.”

Voting during November’s elections was a priority for Paul and his peers. After weeks of wearing “Vote” shirts to warmups and on the sidelines, the NBPA said in October that more than 90 percent of current NBA players were registered to vote, up from 22 percent in 2016. More than 260,000 people voted in the 40 sports arenas that were converted to polling centers.

Paul routinely wears apparel from historically Black colleges and universities — which a majority of his family attended, though he went to Wake Forest — on game days. His stylist, Courtney Mays, said that from the beginning, it was, “Not only about how we were going to celebrate Black designers, but opening up the conversation about historically Black colleges and universities through fashion. And that turned into his philanthropy of giving back to HBCUs and the work he’s doing with Harvard University to bring that programming to HBCUs.” This includes partnering with Harvard Business School Prof. Anita Elberse on new class formatting and offerings at HBCUs. 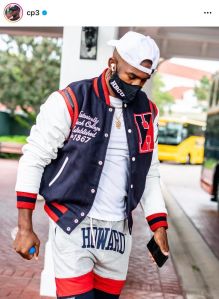 While in the bubble, Paul, a Jordan Brand athlete, wore a different pair of HBCU logo-adorned Jordan sneakers for each game. He also hand-wrote messages calling for social justice on the midsoles. After the season, he partnered with Mov, an app that “support[s] athlete-chosen initiatives,” for “Chris Paul’s HBCU Sneaker Tour.” The sneakers were raffled off, with proceeds donated to the men’s and women’s basketball programs at the respective institutions. “It’s not just like, let me wear a sweatshirt that says Spelman, it’s let me figure out how to get the money and encourage other celebrities and athletes to do the same thing,” Mays said.

Laker LeBron James, another NBA leader, routinely wore More Than a Vote apparel when photographed in the bubble tunnel, which he would then post on his Instagram, where he hovers around 78 million followers. More Than a Vote brings together Black athletes and artists to combat voter suppression and increase voter registration. In 2020, they recruited more than 40,000 volunteer poll workers, helped register Florida voters who had felonies unrelated to murder or sexual assault and increased voter registration for both the general and Georgia runoff elections. 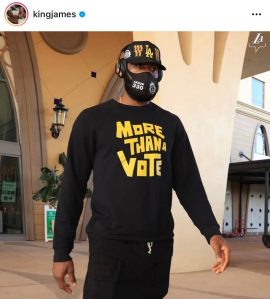 In 2020, athletes are broadcasting their message silently, using fashion to communicate their missions. T-shirts, hats and sneakers are sparking a conversation in the comments and at home in front of the television. The fashion industry is watching the momentum, too. Louis Vuitton recently quickly sold out of a capsule in collaboration with the NBA, and athletes’ stylists are inundated with requests from brands. Dior Air Jordan 1s are amongst the hottest items on the resale market, demanding more than $25,000 on Farfetch for a pair.

Perhaps none of this is surprising. Basketball has been at the forefront of racial justice as far back as Bill Russell, who won 11 championships with the Boston Celtics from 1956 to 1969 and went on to become the first Black coach in the league’s history, also with the Celtics. Russell was an outspoken participant in the Civil Rights Movement and is considered a pioneer of athletic activism.

Vick Michel, who styles Celtic’s Jayson Tatum, among others, and has been credited with declaring that “tunnels are the new runway,” believes it’s important to acknowledge these forebearers when commissioning custom game day attire for Tatum. “When you look at the Black Lives Matter movement, you have to pay homage to Jesse Owens, to [Muhammed] Ali, to the Michael Jordans of the world that paved the way for you to be where you are now. It started somewhere. Fashion didn’t just happen three years ago because League Fits joined Instagram.” 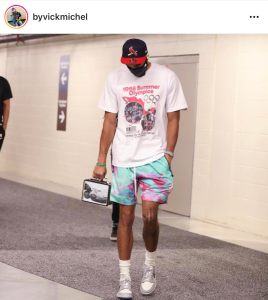 For Black History Month, Michel is having tunnel-ready apparel made for Tatum that features Black boundary-breaking athletes like Kobe Bryant, Jackie Robinson and Ali.

And yet, it was only 30 years ago that Jordan, considered by many to be the greatest player to ever touch a basketball, was asked to endorse Democratic candidate Harvey Gantt in the 1990 Senate race against Republican incumbent Jesse Helms in Jordan’s home state of North Carolina. The face of Nike’s Jordan Brand famously demurred, saying, “Republicans buy shoes, too.” He maintains that this was said in jest and that he contributed to Gantt’s campaign privately.