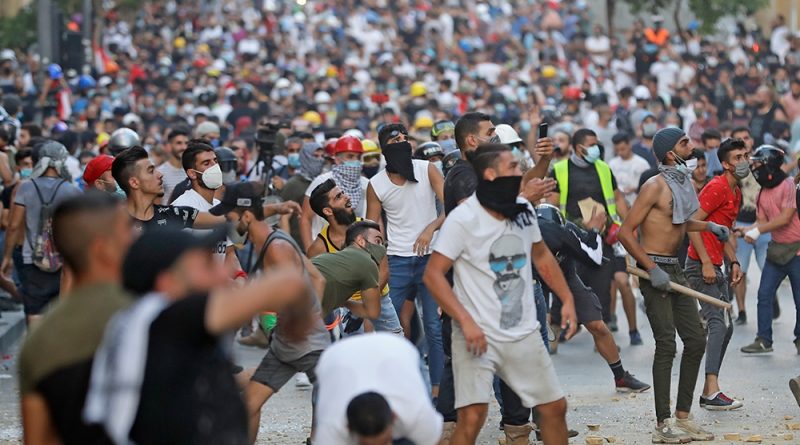 The ministry is “taking precautionary measures with regards to dangerous materials, either immediately releasing them or transferring them to safe storage spaces well outside the range of airports and residential areas,” it said in a statement.

The statement referred to materials held in “cargo bays and storage warehouses in Cairo’s airport and all airports nationwide”, without specifying which kind of materials would be moved.

More than 200 people are believed to have been killed by Tuesday’s devastating explosion, Beirut’s governor has said.

Marwan Abboud said dozens were still missing, many of them foreign workers.

A Lebanese judge has began questioning the heads of the country’s security agencies over last week’s devastating blast in Beirut.

Judge Ghassan El Khoury began questioning Major General Tony Saliba, the head of state security, according to state-run National News Agency. It gave no further details, but other generals are scheduled to be questioned.

Lebanese protesters have called for a rally outside Baabda palace to demand President Michel Aoun to step down after resignations by several ministers, with the justice minister the latest to go.

A cabinet meeting is scheduled for today amid reports that the whole government might resign. If a total of seven ministers resign, the cabinet would effectively become a caretaker government.

Some Lebanese doubt change is possible in a country where sectarian politicians have dominated the country since the 1975-90 civil war.

“It won’t work, it’s just the same people. It’s a mafia,” said Antoinette Baaklini, an employee of an electricity company that was demolished in the blast.

Lebanese Justice Minister Marie Claude Najm said in a statement she had presented her resignation from the government, citing the catastrophic explosion at the port of Beirut.

Najm said she was resigning “out of my conviction that staying in power in these conditions, without fundamental change to the system, will not lead to the reform which we worked to achieve”.

She called on the rest of the government to resign, and said she had also pressed for early elections due to the scale of Lebanon’s crisis. 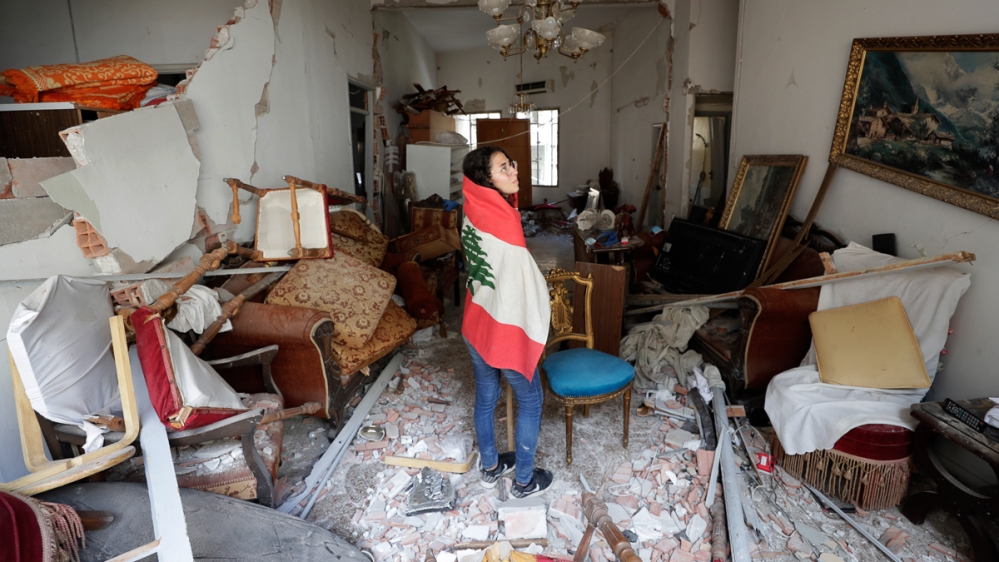 Tuesday’s massive explosion in Beirut tore through thousands of homes, blowing off doors and windows, toppling cupboards, and sending books, shelves, lamps and everything else flying.

Within seconds, more than a quarter of a million of the Lebanese capital’s residents were left with homes unfit to live in.

There are estimates that say 6,200 buildings were damaged.

06:40 GMT – Iran says Beirut blast should not be politicised

Iran said countries should refrain from politicising the massive blast in Beirut last week, adding that the United States should lift sanctions against Lebanon.

“The blast should not be used as an excuse for political aims … the cause of the blast should be investigated carefully,” Foreign Ministry spokesman Abbas Mousavi told a televised news conference.

“If America is honest about its assistance offer to Lebanon, they should lift sanctions.”

The Sursock palace, built in 1860 in the heart of historical Beirut on a hill overlooking the now-obliterated port, is home to beautiful works of arts, Ottoman-era furniture, marble and paintings from Italy – collected by three long-lasting generations of the Sursock family.

The house in Beirut’s Christian quarter of Achrafieh is listed as a cultural heritage site, but Roderick Sursock – owner of Beirut’s landmark Sursock Palace – said only the army has come to assess the damage in the neighborhood. So far, he’s had no luck reaching the Culture Ministry.

“In a split second, everything was destroyed again,” says Sursock.

Hello, this is Linah Alsaafin taking over the blog from my colleague Ted Regencia.

Nine members of parliament and two ministers have so far resigned from their position in Lebanon, according to an Al Jazeera tally.

Manal Abdel Samad, the information minister, and Damianos Kattar, the environment minister, resigned their posts on Sunday as the government comes under heavy pressure following the explosion on Tuesday.

The huge explosions that killed 158 people in Lebanon’s capital Beirut last Tuesday left a 43-meter deep crater at the site, according to local reports. The huge crater lies near a granary destroyed in the blast, filled with seawater.

The explosions at Beirut’s port also injured more than 6,000 people and devastated nearly half the buildings in the city.

US President Donald Trump has pledged that his administration will give “substantial” aid to Lebanon, but did not provide details.

Beirut Governor Marwan Abboud has said several foreign workers and truck drivers remain missing following the explosion and are assumed to be dead.

In an interview with Al Jadeed TV station, Abboud added that many of the fatalities are still unidentified, and that it could take time to complete the identification of the remains.

According to reports, an estimated 45 of the people killed in the blast were Syrian nationals, working in the service sector in the country.

Kristalina Georgieva, the head of the International Monetary Fund, warned Lebanon again it would not get any loans from the institution unless it reformed its government.

“Current and future generations of Lebanese must not be saddled with more debts than they can ever repay,” she said during the pledging conference.

That is why, she said, the IMF requires “debt sustainability as a condition for lending”, adding that “the financial system must be solvent,” too.

Environment Minister Damianos Kattar said in a statement that he was stepping down, becoming the second minister to quit over the explosion.

“In light of the enormous catastrophe … I have decided to hand in my resignation from government,” Kattar said, adding he had lost hope in a “sterile regime that botched several opportunities”.

19:21 GMT – Will explosion cause a humanitarian disaster?

Lebanon was in a dire state even before the enormous explosion which wrecked much of Beirut.

The government is bankrupt, the currency is almost worthless, and millions of Lebanese are jobless. The explosion made things worse by destroying the main port for a nation heavily reliant on food imports.

Some 300,000 people made homeless in Beirut have received little help from the government. Lebanon is also home to 1.5 million Syrian refugees. How will aid organisations deal with the challenge?

Find out more here or watch Inside Story below.

A host of nations have pledged nearly $300m in humanitarian assistance to Lebanon at a conference aimed at rallying international support for the crisis-hit country.

The sums will be routed through the UN, international organisations and NGOs, rather than the Lebanese government – in line with the demands of large swaths of the Lebanese public who fear the funds would be lost to corruption. 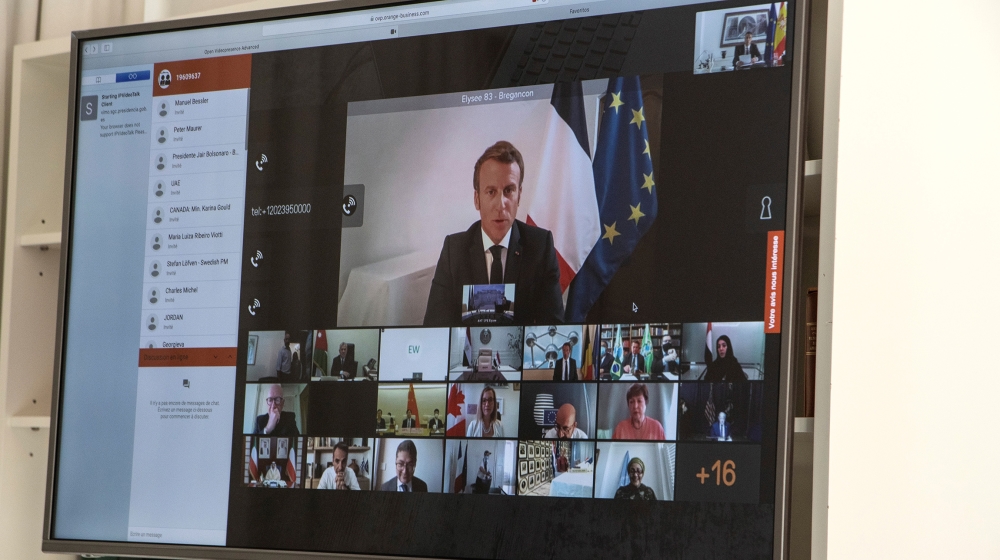 Protesters hurled rocks at security forces blocking a road near Lebanon’s parliament in a second day of protests against the government.

Reuters News Agency reported that hundreds were converging on a main square where thousands of Lebanese protested on Saturday against a political elite they blame for the country’s economic and political woes.

On Saturday, more than 700 protesters were wounded in clashes with riot police who used tear gas and live bullets in a bid to disperse crowds.