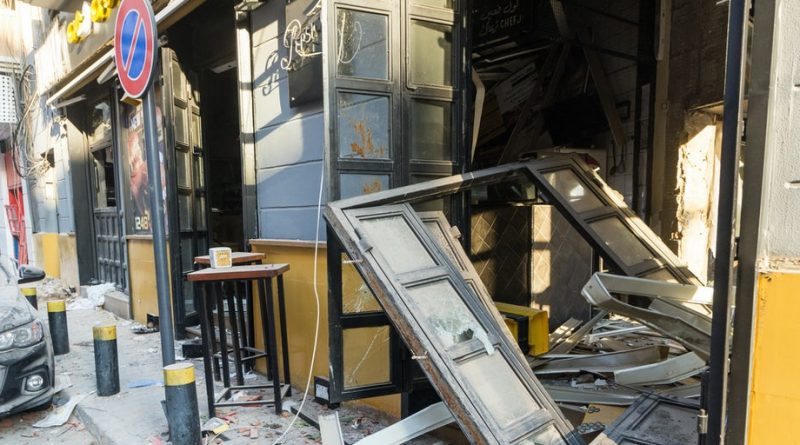 
BEIRUT, Lebanon — Alerted by the sounds of a disturbance at the nearby port, Lebanese fashion designer Amine Jreissati closed his ground-floor store and headed up to his home, one floor above the showroom, to turn on the TV news. Three minutes later he was thrown to the ground, the windows and doors blown out, as the second of two explosions rocked the Lebanese capital.

The blasts, believed to be caused by 2,750 tonnes of ammonium nitrate stored at the city’s docks for six years, rocked the city on August 4, shortly after 6pm, killing 137 people, and injuring thousands. The impact was so strong that it devastated a great swathe of the port area, including part of the city’s fashion district.

“There was no showroom anymore,” Jreissati recalls of viewing his premises from the street. “The entire façade of the showroom got shoved to the back and it took everything on its way. If I was there, I would have died.” Taken in an ambulance with 16 other people, Jreissati received stitches to his head and hand at a second hospital after being turned away from the first due to overcrowding.

Jreissati says that three-quarters of the stock of his fashion brand Boyfriend has been ruined by the blast that devasted Pharaon Street in the Mar Mikhael neighbourhood, which also housed design studio David/Nicolas, shoe designer Andrea Wazen’s flagship store, cult book store Papercup and restaurants Baron and Mayha. 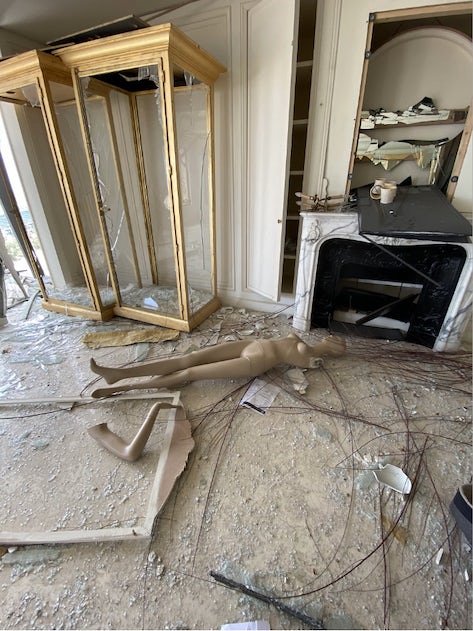 Nearby in the Gemmayzeh district, couturier Zuhair Murad’s staff of 200 left the 11-storey headquarters just 10 minutes before the explosions hit. “We lost everything,” says Murad, “all my memories. I built this building stone by stone, day by day, night by night. It was my dream to build my fashion house in Beirut, in my city, in Lebanon where I was born but in one second everything went and I lost everything.”

Along with clients’ couture pieces and bridal gowns, the company’s 20-year archive has been wiped out, as well as the designer’s art collection. On seeing the devastation, Murad says, “I was crying like a kid,” adding, “no words can express our sadness.”

Rabih Kayrouz was one of several Lebanese fashion designers who posted photos or video footage of the impact of the blast on their offices, ateliers and stores on social media. Kayrouz’s Beirut headquarters appeared to be destroyed by the blast.

At Elie Saab, perhaps Lebanon’s most globally recognised fashion house, staff escaped with minor injuries and the business has closed until August 17 in order to make repairs. “By then we will have reorganised ourselves, fixed the damage to the building and go on,” says Elie Saab Junior, the firm’s global brand director.

He continues, “What happened around us is difficult to absorb but it is in our DNA to go on no matter what. Our first choice is to remain in the country, to remain close to our people and to drive our mission from here, at least when it comes to the haute couture craftsmanship that we took 30 years to nurture within the country and that has been passed from generation to generation within our atelier.”

The disaster comes at a time when Lebanon’s fashion industry was already struggling, having been slammed by inflation that saw the Lebanese pound lose 80 percent of its value since October. Designers’ businesses suffered more once the coronavirus pandemic started to dampen both local and global demand for their products.

“Our business was [already] on its knees…before the explosion.,” says Salim Azzam, the joint winner of Fashion Trust Arabia’s [FTA] womenswear inaugural ready-to-wear prize in 2019.

“No one was shopping. We had almost zero sales locally, and were relying on abroad,” adds the designer who employs 30 women through a social enterprise to embroider his collections. “We were barely surviving before the blast. Now I don’t know what’s going to happen; we’ve kind of forgotten that we have businesses and fashion, and we are just focusing on doing what we can do to clean up and help.”

Roni Helou, another of the FTA’s winners, has had his atelier wrecked by the blast. “A lot of us can’t just stand back on our feet without the support of other people. It sucks that we’re in this position but if people don’t help us we might never be able to recover,” he says. “The entire industry from big names to small names is affected.”

Like many of his peers, Helou did not have insurance, saying, “in this country… we can’t afford to pay for it.” For those that did, the rapidly devaluing currency means that compensation is unlikely to match actual costs.

Jreissati says that even before the explosion, inflation was strangling his business due to the capital controls in the country restricting cash withdrawals. “For me to produce a shirt used to cost $40, including fabric. Now, it’s costing me $300, so I have to sell it for 1.5 million Lebanese Pounds [$1,000] and who’s going to want to buy something for [that price]?”

Prior to inflation taking hold, Elie Saab Junior says that international luxury brands like Hermès, Dior to Chanel were experiencing robust sales in Beirut. “Even five months ago Lebanon was a very decent market to be in for any brand. Important brands were doing important numbers in Lebanon.” But the economic descent of Lebanon this summer has been rapid and brutal.

For decades, Lebanon has played an important role in the regional fashion industry and an outsized role in the global fashion industry. In 2017, Lebanon’s fashion market was worth $1.5 billion, according to Fitch Solutions. This pales in comparison to regional giants like Saudi Arabia and the United Arab Emirates — both markets are worth about 10 times more — but it is only marginally less than that of Qatar and significantly more than other MENA markets like Jordan, Oman and Morocco.

For all the country’s entrepreneurial allure, creativity and dynamism, seemingly intractable problems like political deadlock, factionalism, economic volatility and intermittent social unrest have kept it from fulfilling its potential. The Syrian Civil War has added to the pressure, with Lebanon absorbing nearly 1.5 million refugees at the height of the neighbouring conflict. By the end of 2019, Lebanon was the third most indebted country in the world and real GDP had declined by 5.6 percent in that year according to an estimate by the World Bank. 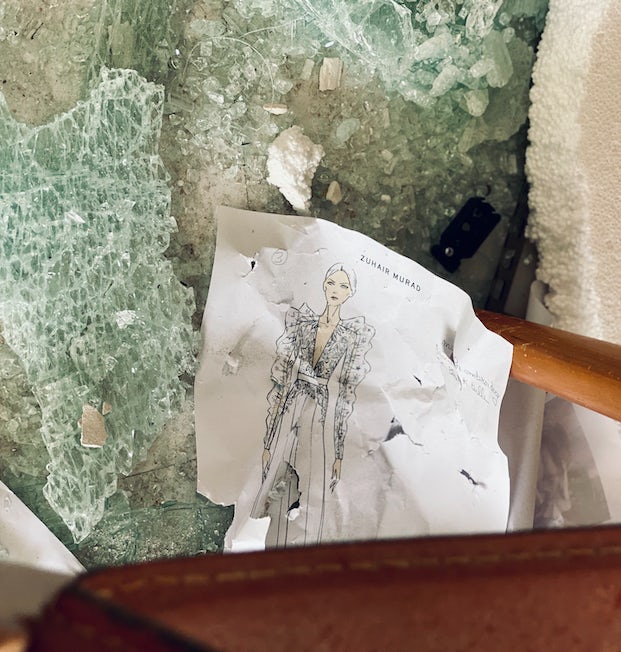 Now, Lebanese fashion industry leaders like Elie Saab Junior urge the international fashion community to support the Lebanese and recognise the talent and creativity the country breeds. “Lebanese need opportunities and need people that can back them and support them in every way possible. When it comes to work ethics, when it comes to people that are driven, resilient and can drive their ideas and be part of an organisation, I advise to look at Lebanese talent.”

With the country’s young fashion industry having been so heavily impacted by the tragedy, there is a concern that the creative community might abandon this city, one that has proven so to be an important regional incubator.

Azzam says, “What scares me most is having all these creative people lose their hope. Beirut is one of the best cities in the Middle East. People come here for the good food and the party scene and the freedom of expression and there are so many artists and designers who have put the name of this country on the map. I just hope that they don’t lose hope and they believe that we will be able to rise up again.”

However, the reality is that the triple crisis – economic, health and humanitarian – will be hard to overcome. The international response, spearheaded by French President Emmanuel Macron’s visit to the country, will be key to recovery but the growing consortium of international aid could be conditional on government reform in a country famous for its political instability. Meanwhile, the famed resilience of the Lebanese people — a population that has overcome civil wars and myriad crises in the past — will be tested like never before.

The exasperation felt by many can be heard in the voices of entrepreneurs like Jreissati. “I gave everything for this country and I have nothing in return. I gave it my entire being. I never accepted a job abroad, I always believed in Beirut. But I didn’t fail, the country failed me. I need to live a normal life and this is not a normal life. This is not a life.”

He continues, “Everyone was saying today, thank god we’re alive. [But] is this our only right? To be alive? Thank god we didn’t die but everything we’ve worked for, everything we’ve invested for what, for who? What do we have? No human rights, no medical rights, no electricity, no water. Nothing. Corruption. If I can take a plane tomorrow, I’ll take it.”

Fortunately for Lebanon, its business community and its fashion industry, not everyone feels quite so disheartened. “The priority today is to build back the country [because] this was really a physical injury that might paralyse the Lebanese people if we don’t get the necessary help for the country for people to rebuild their homes, feed their kids and their family,” concedes Elie Saab Junior.

“[But] once the country is rebuilt and people are receiving their basic resources and there is better visibility of how the damage will be rebuilt, we will find a way. Today we hope there will be very soon a path to solvency [but] to come back to the levels we were at not so long ago, it’s going to take time.”

Can Beirut Steal Some of Dubai’s Thunder? 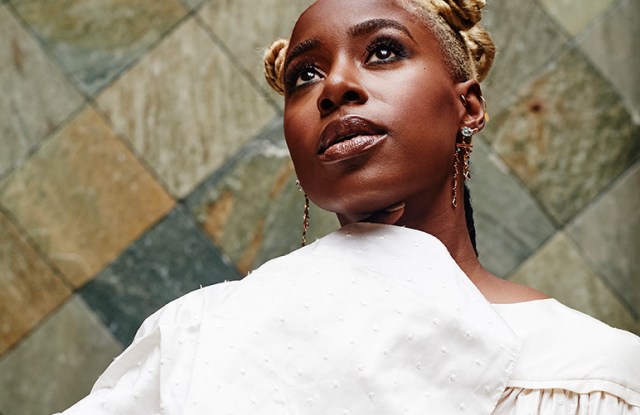 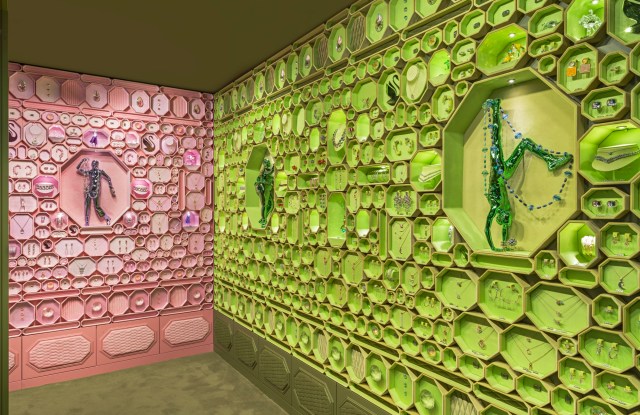