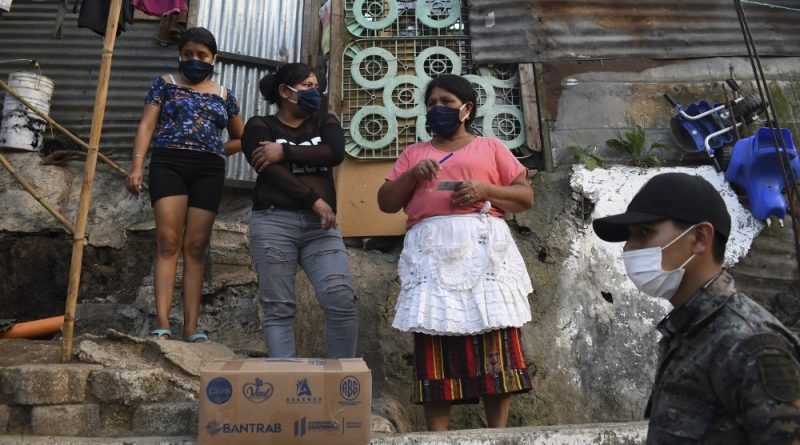 07:20 GMT – US unfreezing Venezualan assets for fight against COVID-19: Guaido

Venezuela’s opposition said the United States has granted it access to millions of dollars of frozen Venezuelan government funds to support efforts to combat the spread of COVID-19 in the country.

The US Treasury Department had approved the release of the funds, the opposition said in a statement without specifying the total amount.

The statement said part of the released funds would go to pay some 62,000 health workers $300. During a live appearance on Twitter on Thursday night, opposition leader Juan Guaido said health workers could register accounts to receive payments of $100 a month starting Monday. Healthcare workers in Venezuela can earn as little as $5 a month.

The number of confirmed coronavirus cases in Germany increased by 1,427 to 230,048, data from the Robert Koch Institute (RKI) for infectious diseases showed.

The reported death toll rose by seven to 9,260, the tally showed. 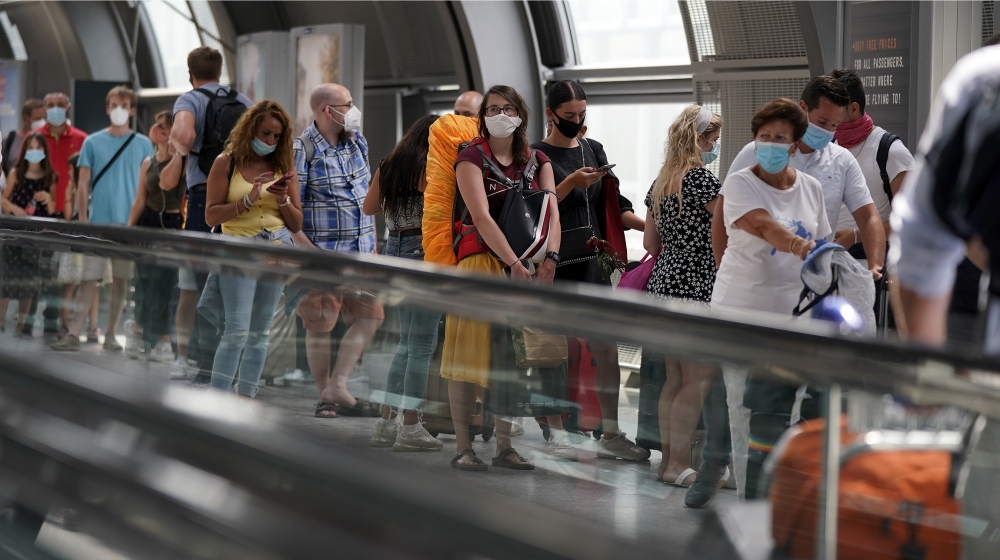 Passengers stand in front of a coronavirus test centerat the international airport in Frankfurt am Main, Germany [EPA]

Hungary will tighten border crossing rules from September 1 to prevent the spread of the coronavirus as the number of new infections is rising in neighbouring countries, Prime Minister Viktor Orban told state radio.

Orban, a nationalist who has been in power for more than a decade, also said the government would draft a two-year plan to boost the economy by the middle of next month, after a deeper-than-expected 13.6 percent plunge in second-quarter economic output.

06:00 GMT – UAE could reintroduce curfew in some areas: official

The United Arab Emirates could reintroduce a de-facto overnight curfew in some areas of the country if there are a high number of COVID-19 infections there, a government official said.

The Gulf Arab state has seen the number of cases rise this week to over 400 for the first time since mid-July, including 461 infections and two deaths in the 24 hours to Thursday.

Hello, this is Usaid Siddiqui in Doha taking over from my colleague Zaheena Rasheed.

South Korea reported 324 new cases of the coronavirus, its highest single day total since March 8, as the recent surge of COVID-19 in the greater capital area now appears to be spreading nationwide.

Friday was the eighth consecutive day that South Korea reported a triple-digit daily increase, for an eight-day total of 1,900 infections.

Most of the recent new cases have been in the densely populated Seoul metropolitan region, but officials said the latest new infections were recorded in practically all major cities nationwide, including Busan, Gwangju, Daejeon, Sejong and Daegu. Some of the new cases included people who attended a rally by conservative political groups in Seoul last week.

“This is a very serious situation,” Vice Health Minister Kim Gang-lip told a briefing, urging people to come forward and be tested. “The risk of nationwide virus spread is increasing.”

The government is now trying gather the names of thousands of people who attended the rally, as well as the names of the drivers who drove attendees from the provinces, he said. 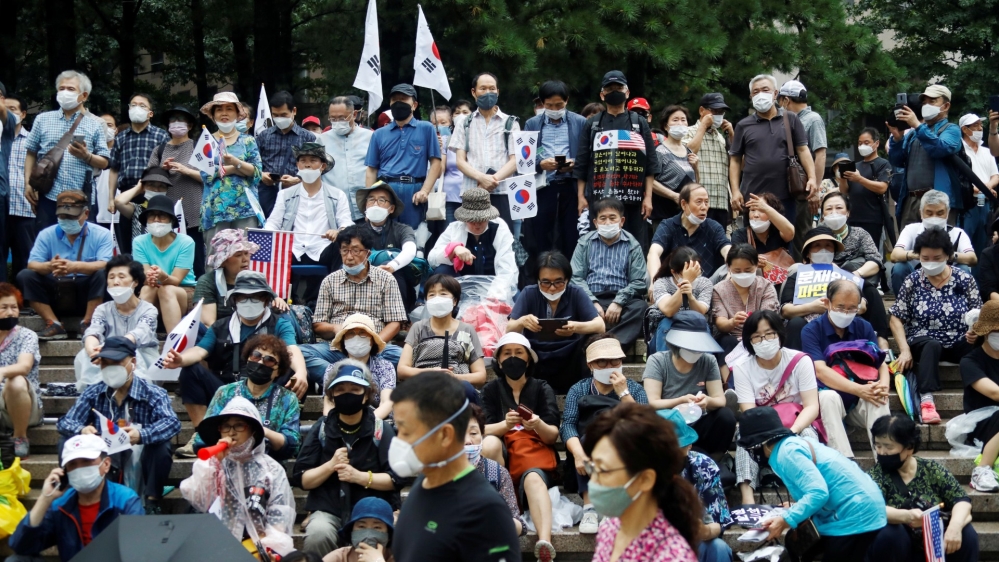 India hurtled toward the 3 million mark for coronavirus cases, reporting 68,898 new infections in the last 24 hours.

The total number of cases in the country now stands at 2.9 million. Deaths in the same period jumped by 983, with the total now at 54,849.

The experimental vaccine of CNBG, a unit of state-owned pharmaceutical giant China National Pharmaceutical Group (Sinopharm), has entered a Phase 3 trial in the United Arab Emirates that has already recruited 15,000 volunteers.

It has also obtained approval to be tested in Bahrain in a Phase 3 study designed to involve around 6,000 participants.

Health authorities ordered residents of Sittwe, the capital of Myanmar’s Rakhine state, to stay at home after detecting three more locally transmitted cases, according to the Myanmar Times newspaper.

A total of nine cases have been reported in Rakhine since August 16, when authorities detected Myanmar’s first locally transmitted case in nearly a month.

Buses and flights have suspended operations in and out of Sittwe starting on Thursday.

For years now, Rakhine has been mired in conflict between the military and ethnic groups seeking greater autonomy. The restive state is also home to the Rohingya, a persecuted mostly Muslim minority, many of whom now live in camps for displaced people.

Joe Biden, the Democratic Party’s presidential candidate, said his “first step” if elected president of the United States would be to “get control of the virus that has ruined so many lives”.

His plan to contain the pandemic included developing and deploying rapid tests, bolstering the supply of protective gear and instituting a national mandate for masks.

Biden also offered a withering assessment of Donald Trump’s response to the pandemic: “Our current president has failed in his most basic duty to the nation: he has failed to protect us.” 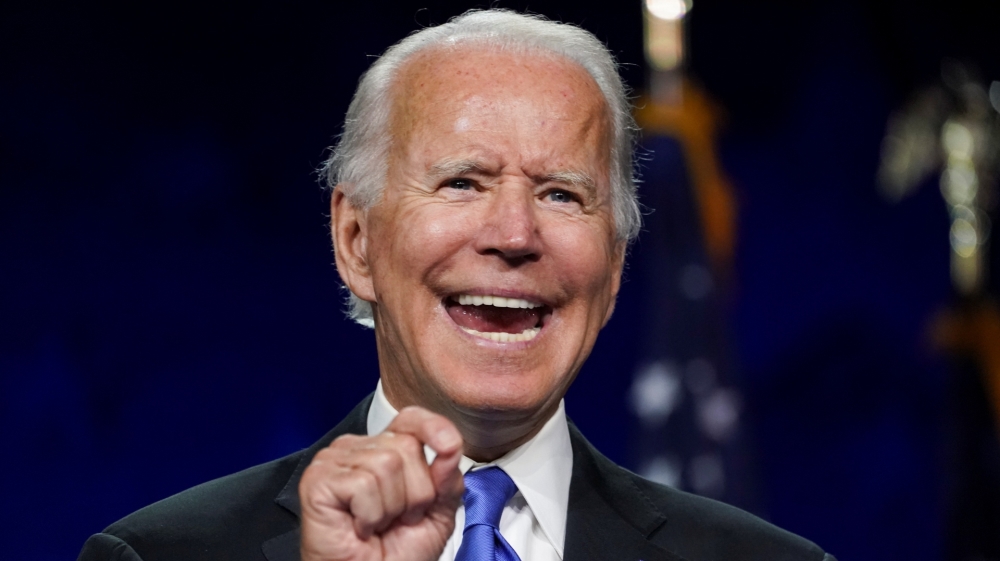 Joe Biden accepts the 2020 Democratic presidential nomination during a speech delivered for the largely virtual 2020 Democratic National Convention from the Chase Center in Wilmington, Delaware, US, August 20, 2020 [Kevin Lamarque/ Reuters]

New Zealand reported nine new locally transmitted coronavirus cases, and put off a decision about easing restrictions in its biggest city of Auckland to next week.

Prime Minister Jacinda Ardern said she would announce on Monday whether the government would ease alert level 3 restrictions enforced in Auckland, and level 2 measures in the rest of the country.

Germany will need to take on yet more debt in 2021 to mitigate the impact of the coronavirus on the economy, Finance Minister Olaf Scholz said.

“Next year we will continue to be forced to suspend the debt rule and spend considerable funds to protect the health of citizens and stabilise the economy,” Scholz said in an interview with the Funke media group, referring to Germany’s cherished policy of keeping a balanced budget.

Scholz already plans to borrow around 218 billion euros ($258bn) this year to help pay for a huge rescue package to steer the country through the coronavirus-induced downturn.

The minister said he was expecting the German economy to have recovered from the virus shock and returned to pre-crisis levels “by the end of next year or the beginning of 2022”.

Australia’s Victoria reported its lowest number of new infections in five weeks, logging 179 new cases in the past 24 hours, compared with 240 a day earlier and down from over 700 two weeks ago.

Despite the second wave outbreak in Victoria, Australia has largely avoided the high casualties of other nations with just under 24,500 infections and 450 deaths from the virus. 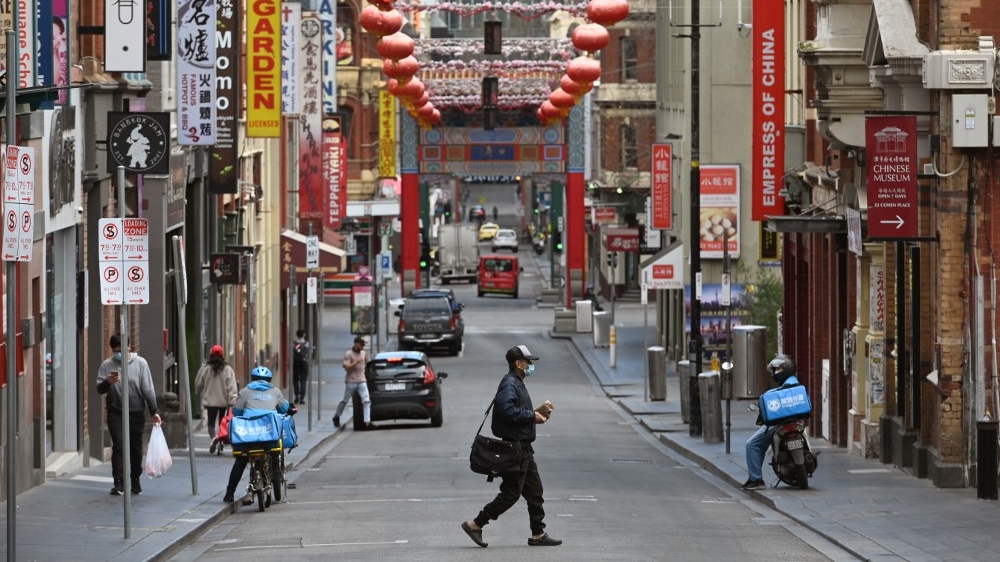 Re-entry will be permitted for visa holders, including permanent residents and exchange students, on condition that they undergo coronavirus testing and quarantine for 14 days, the same policy that applies to Japanese citizens re-entering the country, according to NHK.

Mexico will receive at least 2,000 doses of Russia’s potential COVID-19 vaccine, dubbed ‘Sputnik V’, to test among its population, according to the Mexican foreign minister.

Mexico has already agreed to help manufacture a vaccine candidate being developed by Britain’s AstraZeneca and Oxford University to supply the Latin American market. It is also preparing to carry out late-stage trials for US company Johnson & Johnson and two Chinese companies.

David Malpass, the president of the World Bank, warned that the coronavirus pandemic may drive as many as 100 million people back into extreme poverty.

The Washington-based development lender previously estimated that 60 million people would fall into extreme poverty due to COVID-19, but the new estimate puts the deterioration at 70 to 100 million, and Malpass told the AFP news agency “that number could go higher” if the pandemic worsens or drags on.

The situation makes it “imperative” that creditors reduce the amount of debt held by poor countries at risk, going beyond the commitment to suspend debt payments, he added.

King Mohammed VI warned that Morocco could return to a complete coronavirus lockdown amid a jump in infections that has strained health services and triggered protests by medical staff.

New cases nationally have surged to more than 1,000 a day since Morocco lifted a strict three-month-long lockdown in late June and hit a record high of 1,766 on August 15.

“If figures continue to increase, the COVID-19 Scientific Committee may recommend another lockdown, perhaps with even tighter restrictions,” the king said in a speech.

Canada announced a four-week extension of emergency aid for people who lost work due to the pandemic, and an easing of rules on qualifying for unemployment benefits when that expires.

Officials estimated the cost of the new measures at 37 billion Canadian dollars ($28bn) over one year.

About 4.5 million Canadians, or 12 percent of the population, are currently receiving $2,000 a month in emergency support. That will now be in place until September 27.

Afterwards, claimants will be shifted to an unemployment benefits programme.

Peru’s year-on-year gross domestic product (GDP) fell by 30 percent in the second quarter of 2020 due to coronavirus containment measures, the government said.

In Peru, mandatory confinement was in place throughout the whole of the second quarter and was only lifted in the majority of the country on July 1. The worst-hit sectors of the economy were mining, down by 20.9 percent; processing, down by 44.5 percent; and services, down by 28.3 percent, the state statistics and information institute said.

In Argentina, official data showed the country’s economy contracted by almost 13 percent in the first quarter of 2020 compared to the same period last year.

The year-on-year fall in GDP for June was 12.3 percent, although that was an improvement on April and May.

The number of COVID-19 deaths in Latin America surged past 250,000 on Thursday, according to a Reuters tally.

The grim milestone was passed as Brazil reported 1,204 deaths from the virus in the past 24 hours.

Over the past week, the region has reported more than 3,000 deaths a day, while daily caseloads continue to rise in Peru, Colombia and Argentina.

Brazil reported 45,323 new cases of the novel coronavirus and 1,204 deaths from the disease caused by the virus in the past 24 hours, the health ministry said.

Brazil has now registered 3,501,975 cases of the virus since the pandemic began, while the official death toll from COVID-19 has risen to 112,304, according to ministry data.

Go here for all the key developments from yesterday, August 20.