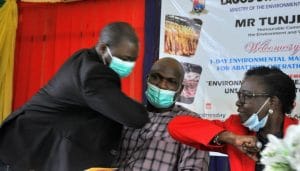 The Lagos State Government on Wednesday listed new standard operating procedures for hygienic and safe environmental operation of abattoirs in the state.

The Commissioner for Environment and Water Resources, Mr Tunji Bello, announced this during a sensitisation workshop for abattoir operators in Lagos.

The theme of the workshop was “Environmental and Health Implications of Insanitary Abattoir Operations”.

The commissioner, who was represented by the Permanent Secretary, Ministry of the Environment and Water Resources, Mrs Belinda Odeneye, said every abattoir must be approved by the regulatory authorities for hygienic slaughtering of animals.

According to him, due to rapid increase in demand for meat, slaughterhouses spring up in nook and crannies of the state in an attempt to meet the rising demand, causing hazardous operations of abattoirs.

He said that hazardous operations of slaughterhouses, if not properly addressed, could be detrimental to the environment and human health.

Bello said that Lagos butchers needed to be exposed to international standards of operation in the industry.

He said that suitable and sufficient space should be provided for slaughtering of animals and space for hanging meats to allowed easy blood draining.

“The slab must be made of impervious material with proper drainage to collect wastewater for appropriate treatment.

“The abattoirs slaughterhouse should be laid out in such a manner as to provide adequate space for the meat processing activities such as evisceration, meat cutting and other processing under hygienic conditions.

“Abattoir should endeavour to have adequate number of toilets with suitable flushing appliances for both sexes and should not communicate directly with the slaughter slab as well as meat processing sections,” Bello said.

He said that the United Nations Environment Programme (UNEP) had revealed that abattoirs had polluting effects on its surrounding residents  where they were located.

The commissioner said that waste generated in the abattoir could be converted to wealth if it was properly managed, adding that cow dung could be collected in a sack drained and later sold to farmers as manure.

Bello explained that the waste water drained from the dung could equally be used as fertilizers in planting pumpkin leaves and other vegetables while the blood of slaughtered animals meals could be use as industrial production materials.

He, however, said that the Lagos State Government, through the Ministry of Environment and Water Resources, had instituted regular monitoring and advocacy as a way of enlightening the different groups in the value chain of abattoir operations.

He said that routine monitoring and inspection of abattoir operations would be carried out by officials of the Ministry of Environment and Water Resources.

Bello said that the objective was to monitor, evaluate and educate both the operators and workers in the abattoir business on sound sanitation and hygiene practices.

The General Manager, Lagos State Environmental Protection Agency (LASEPA, Dr Dolapo Fasawe, who was represented by Dr Ayodele Osinfeso, said there were unhygienic practices among some abattoir operators in the state.

Fasewa said to correct the challenges in in abattoir operations, the agency would collaborate with the Ministry of Environment to ensure that the abattoir kept hygienic environment.

She said that burning of animals skins with plastic could lead to cancer, adding that cleaner environment was a collective responsibility.

Also in a goodwill message, Director Veterinary Service, Ministry of Agric, Dr Macaulay Molade, who was represented by Dr Femi Adeyemi, said that

there was an interactive session between Ministry of Education and Agric which enabled them to inform the abattoir operators to stop using plastic in smoking animal skins.

He said that Lagos was a pacesetter when it comes to hygiene in the abattoir operations, adding that cleanness was a  collective responsibility.

In his lecture, Dr Femi Aluko, Department of Community Health, Obafemi Awolowo University, said that failure to observe protocol in the abattoir could affect the immediate environment and society as a whole.

Aluko said that every abattoir should have a lairage where animals ready to be slaughtered were kept and after being certified by the Ministry of Agriculture.

He said that about 8, 000 cattle and animals were slaughtered in Lagos State daily, valued at N1. 6billion.

Kazeem assured that the operators would continue to improve on enforcement during meat processing to produce healthier meat for human consumption. (NAN).