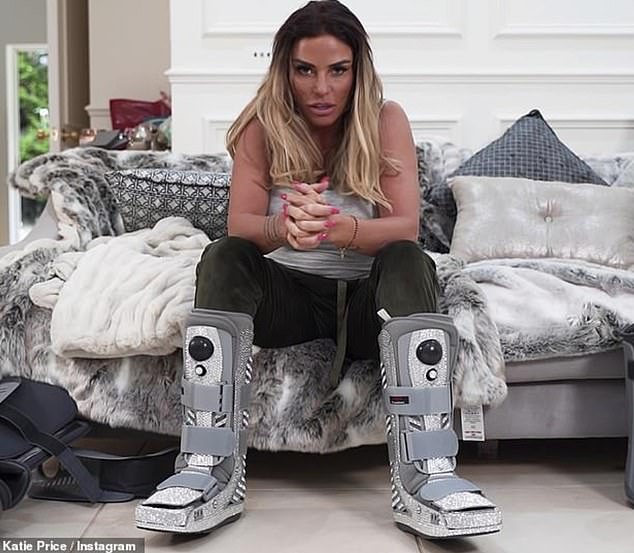 Katie Price has revealed that she’s been registered disabled after breaking both her feet when she fell 25ft in a freak accident.

The former glamour model, 42, suffered the horrific injuries during a trip to Turkey last August and had to undergo an eight-hour operation to rebuild her feet.

Discussing how she’s coping six months on, Katie has detailed how she’s in constant pain and ‘waddles like a duck’ when trying to walk, with 20 minutes a day being her limit, in a new interview with The Sun.

‘I’ll never be the same’: Katie Price has revealed that she’s been registered disabled after breaking both her feet and ankles when she fell 25ft in a freak accident in Turkey last August

Katie said: ‘I will never be the same… I’ve got a limp when I walk now as one leg is longer than the other because of all the metal in the foot — I waddle like a duck. It does make me feel a bit paranoid

‘I’m registered disabled and have got letters from the doctors to certify me for a blue badge, which I’ve sent off for.’

Speaking about the pain she’s still feeling after the accident, Katie said that she feels like she’s ‘being electrocuted’ as the pain shoots through her feet.

The mother-of-five also revealed that she’s not been taking either of the painkillers given to her as she’s worried about becoming addicted so is always in lots of pain. 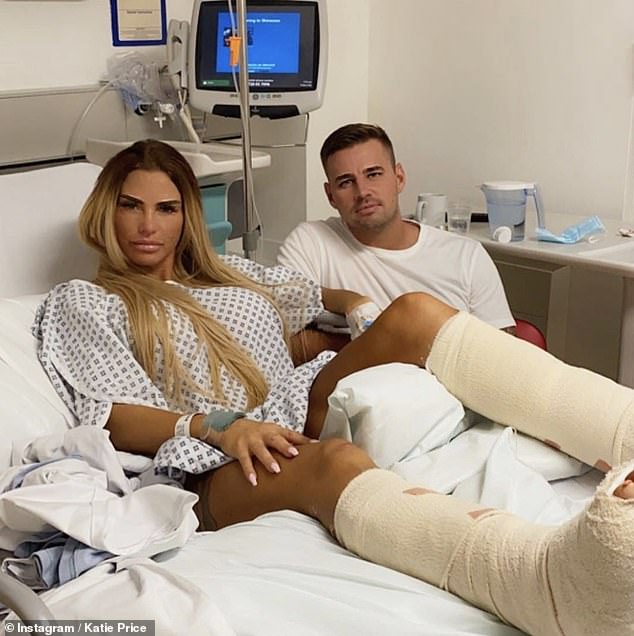 Pain: The former glamour model, 42, had to have an eight-hour operation to rebuild her feet and has been in constant pain since the accident (pictured with beau Carl Woods)

She went on to explained how when out shopping she has to strategically park close to the shops and can’t carry heavy items as it hurts her feet too much.

Katie, who can only walk for 20 minutes and has physiotherapy sessions four times a week, also said she’s been overcompensating for the pain while trying to take steps meaning the rest of her body is taking a toll.

She revealed she’ll have to get her legs and hips ‘aligned’ and also wears pads in her shoes to help with a collapsed arch.

As well as impacting her health, the constant pain and difficulty moving around has meant the mum-of-five has had to miss out on playing with her children. 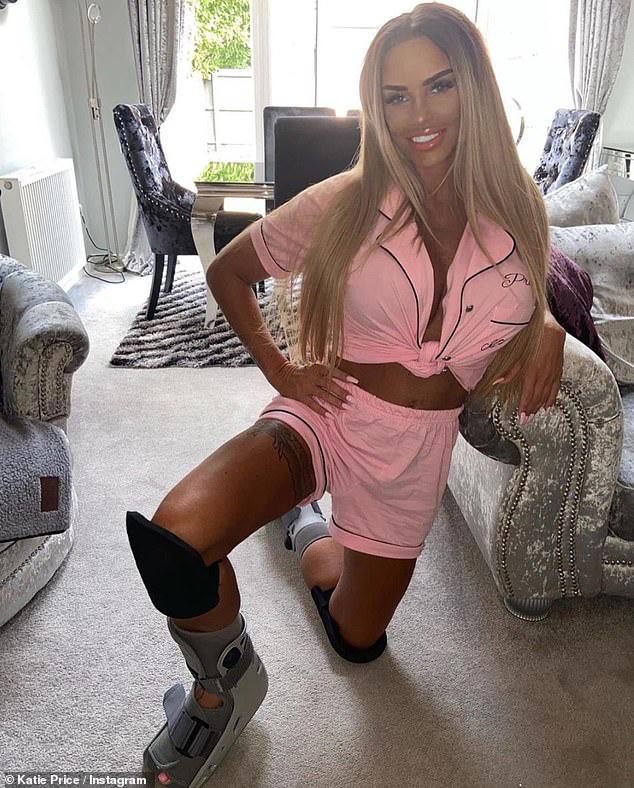 Stay strong: Despite not being able to walk for more than 20 minutes a day and saying she ‘waddles like a duck’, Katie has remained overwhelmingly positive amid her health battle

Katie, who’s now getting legal advice about her situation, said: ‘This has all affected our home life dramatically… It’s all just a nightmare that has gone from bad to worse.’

Katie’s injury happened last August while she was on holiday in Turkey with her beau Carl Woods and children Princess, 13, and Junior, 15.

She plummeted 25ft off a wall at a theme park in Turkey and landed on her feet, later revealing that she feared that she would be ‘paralysed’.

The star later explained how her feet are ‘destroyed’ following the incident, with doctors telling her they have amputated legs with similar injuries, and admitted she returned to The Priory to learn to ‘walk again.’ 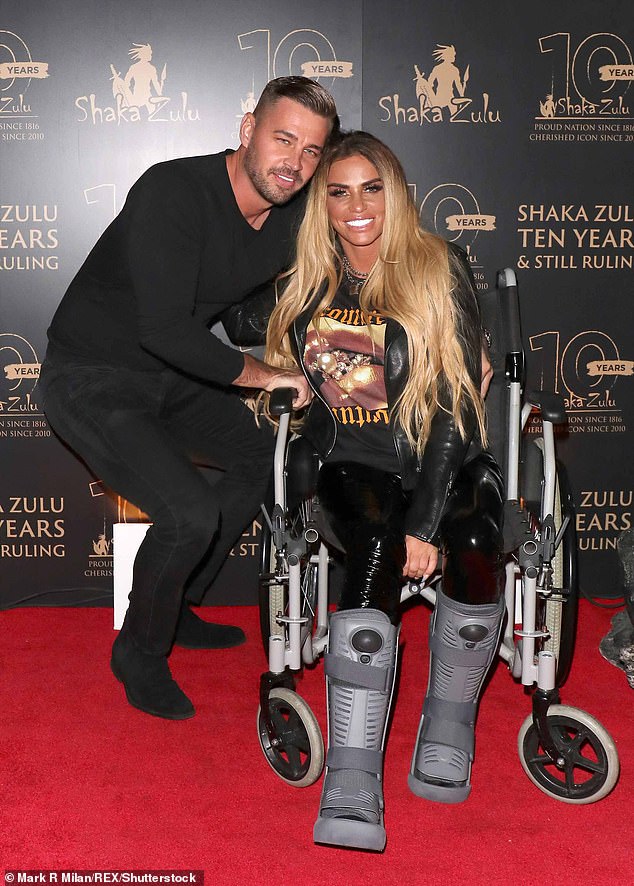 Recovery: Katie now has physiotherapy sessions four times a week in a bid to improve her walking and is supported by her boyfriend Carl (pictured together in September 2020)

Speaking to The Sun, she said: ‘The doctors said I’m lucky I’m not dead. I could have hit my head and I could have been paralysed, I am lucky I landed on my feet.’

Katie underwent an eight-hour operation to rebuild her feet after she was ‘mucking about’ following a few drinks and jumped off what she thought was a ‘small wall’ at the Land of Legends theme park.

Discussing her injury on her YouTube channel at the time, Katie said: ‘Silly me, at my age, should calm things down. Basically, silly little accident. I was running and jumped over a wall, as it was a little shortcut, and didn’t really judge the height.

‘I just sort of fell funny on my ankles and I fractured the hairline on my heels and stuff. The hospital here wanted to operate and wanted to put pins in and stuff. Because I’m away, I’d rather wait until I get home. 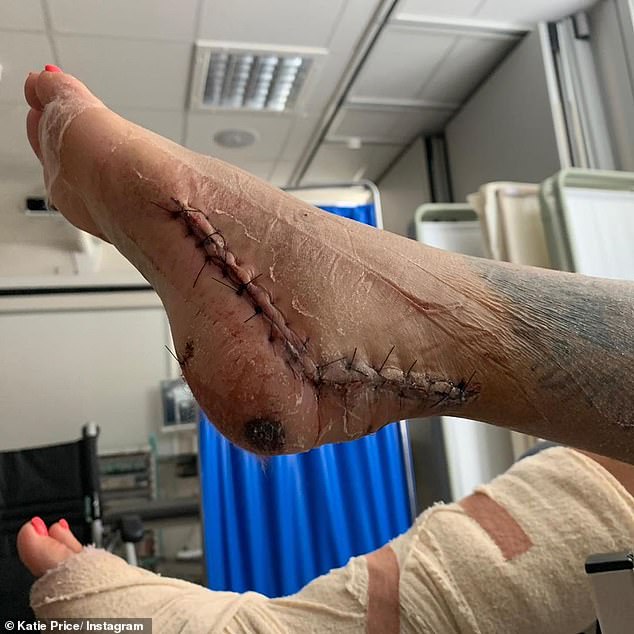 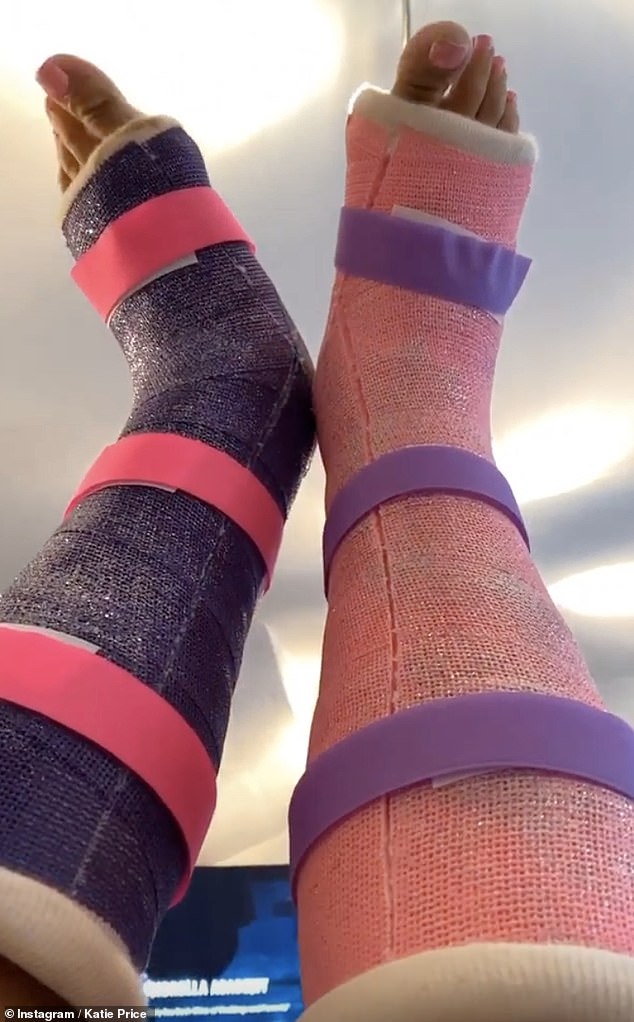 Changes: The mother-of-five said her injuries have meant she’s missing out on fun times with her children as she can’t be as active as before

‘It’s the most painful thing ever. Like when I was trying to put the cast on, I was screaming in pain. They said I won’t be able to walk for three to six months.’

The model has also revealed how she has returned to The Priory because her ‘mental health’ has been ‘badly affected’ by her injuries.

She last visited The Priory in September 2018 and spent 28 days in the facility after her family urged her to seek help following wild partying antics in Mallorca.

Katie has always been very candid about her recovery from the injury and previously revealed she feels ‘humiliated’ at the prospect of having to learn to ‘walk again’.

She’s discussed how tasks are ‘impossible’ including going to the toilet, cooking, reaching for the cupboards and taking a bath where she could ‘drown’. 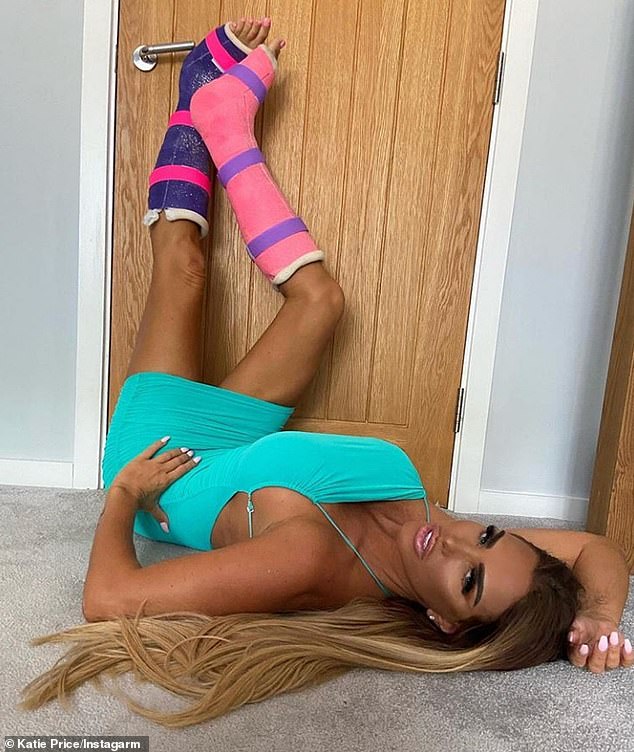 Recovering: Speaking about the pain she’s still feeling after the freak accident, Katie said that she feels like she’s ‘being electrocuted’ as the pain shoots through her feet

Katie, who is also mum to Harvey, 18, Jett, 7, and Bunny, 6, explained how she is ’embarrassed’ of having to be pushed around and told how people treat her ‘differently’.

She added that she ‘feels sorry’ for boyfriend Carl who has doted on her since the accident and said that it is ‘demoralising’ seeing him push her in the wheelchair.

But the CBB star described how she would be ‘lost’ without her beau and revealed how she can still ‘keep Carl happy in the bedroom’ with him having ‘no complaints’.

However Katie also vowed that she is ‘never drinking again’ following the traumatising accident and plans to cover up her ‘mangled’ feet with tattoos. 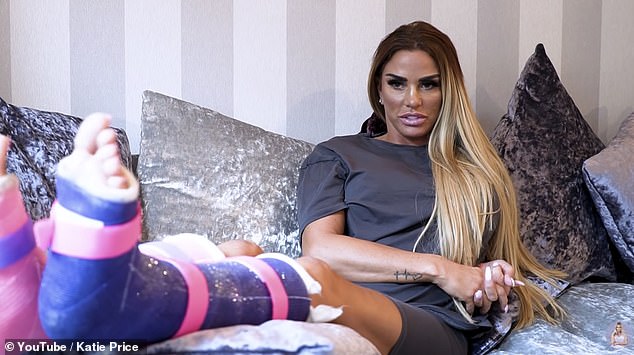 Open: Katie has always been very candid about her recovery from the injury and previously revealed she feels ‘humiliated’ at the prospect of having to learn to ‘walk again’