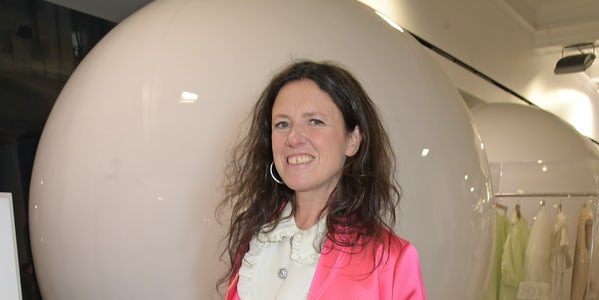 “The world has changed, and I have changed, and what is important is now so clear,” wrote Grand in an Instagram post on Friday, which included an image of the first issue of the magazine, with singer Beth Ditto on the cover. “Telling beautiful and important stories will never change. But it’s time for something new, it’s time for something different. Thank you to every single person who has collaborated, who has created and who has supported us. It’s been an incredible, unforgettable and life-changing journey. Now, we are on to the next… And it’s exciting.”

Grand did not address any plans for her replacement, and a spokesperson for Condé Nast said a successor will be named at some point. When asked if the magazine would remain operational, the spokesperson had no comment.

A spokesperson for Grand said she will be working with Sarabande, the foundation established by Alexander McQueen in 2007 to support emerging artists, and The Red Cross.

Grand, a creative director and stylist known also for her collaborations with designers, particularly Marc Jacobs and Miuccia Prada, has had a prolific career as a magazine editor: she served as a top editor at Dazed & Confused (which she co-founded with Jefferson Hack and Rankin), The Face and Pop (which she also launched).

Love has also expanded into video and film and garnered attention for its annual digital advent calendar, which was reformatted in 2018 after the #MeToo movement rendered its overtly sexual approach outdated.

In Love‘s latest issue, Grand wrote about her life over the last several months leading up to the release of the latest edition of the magazine. She contracted Covid-19 after travelling to Milan and Paris for fashion month in March and writes about experiencing difficult symptoms for four weeks, during which she also was thought to have pneumonia.

“This issue is a celebration of artists,” Grand wrote. “It was a fuck of a big ride to get there, the biggest emotional rollercoaster of my life. It’s a diary of 2020 so far, from Covid to protest. We’ve done away with my title of editor-in-chief as it’s no longer relevant. The whole team did this work: everyone brought their ideas and personal journeys to the table and should be credited accordingly.”

In a statement, Managing Director of Condé Nast Britain Albert Read thanked Grand for “11 years of extraordinary creativity and fun.”

Where to begin (and what a way to end)? At the beginning, I suppose. It started with a few notes and a few phone calls (probably on landlines). Our first cover was of my longtime friend Beth Ditto and us dyeing her hair orange and photographing her in the presidential suite at the Chateau Marmont Hotel in Los Angeles with Mert and Marcus. The clothes were specially made by Gareth Pugh, Marc Jacobs for Louis Vuitton and many others. We didn’t think about making a statement or being controversial – it was a gut instinct of loving Beth and her music and wanting to take strong, sexy pictures of her. Fast-forward 12 years and I’m just as proud of the new covers of LOVE as I was of Beth’s. The social and media landscape is a million miles away from 2009 – I think back then our social presence was MySpace and we barely had a website. This month we published issue 24 of LOVE. During the most politically and sociologically turbulent period I believe I’ve seen in my lifetime, we produced something special that I hope reflected the unpredictable times we are living in. From Covid to the #BLM protests, me and the team sought to listen to our contributors and give them the space they deserved. #lovediaries was not really a fashion magazine, it was a book of pictures and words that reflected this year’s chaos, soul-searching, heartbreak and – although sometimes it was hard to see – positivity and hope. This issue is the most important magazine I have ever produced. It is the one I am most proud of, it is the one that means the most; it is the one that I can’t improve on. The world has changed, and I have changed, and what is important is now so clear. Telling beautiful and important stories will never change. But it’s time for something new, it’s time for something different. Thank you to every single person who has collaborated, who has created and who has supported us. It’s been an incredible, unforgettable and life-changing journey. Now, we are on to the next… And it’s exciting. LOVE Katie