Jerry Lorenzo has been very busy over the past two years.

The Fear of God founder created the Essentials label under his brand, opened a temporary store in Los Angeles and partnered with Zegna on a collection. He was also hard at work developing the Fear of God Seventh Collection that goes to market today.

Seventh Collection is an expansion for the brand to categories like knitwear, tailoring and accessories, a further separation from streetwear and an establishment as an American luxury brand. Lorenzo told WWD that he doesn’t consider Seventh Collection to be a departure from what the brand has provided since its launch in 2013, but rather an evolution.

“The direction is always the same,” Lorenzo said. “It’s chasing the space between elegance and comfortability and trying to land the plane in those two words. We’ve just added categories and new vocabulary.”

Seventh Collection retains much of what Fear of God is known for like its made-in-Los Angeles denim — this season sees distressed light wash and three-year wash jeans — and authentic washes on T-shirts and hoodies, but from there, Lorenzo displays the maturation and sophistication of the brand through new categories produced in Italy.

The inception of Essentials and the collaboration with Zegna are significant in the brand’s growth.

“What Essentials does for us is allows us to have the mainline be aspirational. It relieves the pressure of providing certain sku’s,” he said. Essentials was introduced in 2018, offering styles that Lorenzo is known for like T-shirts and hoodies with wider collars. The latest collection launched in July at PacSun and ranges in price from $40 to $200.

“Essentials has done extremely well with loungewear and hoodies that people want to wear on quarantine. [Seventh Collection] will really be our first test at a luxury price point, we’ll start to see what effects if any we’ll feel from COVID-19.”

The collection, which merges luxury tailoring with American sportswear, will hit Zegna stores in September.

Lorenzo isn’t changing his strategy or distribution for the Seventh Collection, but said he hopes for a different position on the sales floor. He’s selling the collection on a virtual platform and has done business-to-business videos for retailers. He found it ironic that after being antifashion show and showroom for so long, he’s offering something he wants everyone to see and feel in-person, but they can’t because of COVID-19.

Despite this, buyers and customers will have the same opportunity to buy the collection. The brand has always done preorders for customers and will do so again for as many as 15 pieces of this collection by the end of the week.

“Our hope is that with this offering, it transcends time and buyers feel more confident,” he said. “The emotion is flashy but when you walk in the room you’re not the loudest in the room. It’s understated confidence.”

The number seven represents completeness and perfection in the Bible, which informs Lorenzo’s Seventh offering, but he also sees this collection as a new beginning for the brand.

“I think for the first time, the story is really around our maturation as a brand,” he said. “Two years ago [in our campaign] with Jared Leto, we built this set that was built outside of time and space and there was this eternal theme and we’re still playing with the theme but it’s in the pieces. We’re demanding not to be considered street, emerging or contemporary, but a definition of what fashion is, where it is today and where it’s going.”

The Seventh Collection also sees further establishment of Fear of God’s codes: California, baseball and faith. Lorenzo introduced his take on casual tailoring that he described as California ideas. He also paid homage to the Negro League’s 100th anniversary in the collection — “It wasn’t until six months ago that I knew it was the anniversary.” His grandfather played in the league on the Atlanta Black Crackers.

He mentioned the collection’s “G” cap that references the Washington Homestead Grays, but for those very familiar with Fear of God and unaware of Negro League teams, they may assume the G is for God, according to Lorenzo.

Much of the collection is inspired by late Eighties and early Nineties tailoring with drop shoulders on long coats and aggressive peak lapel suit jackets, as well as sophisticated sportswear loosely inspired by Ivy League universities. One sweater features a large letter A and smaller number seven as homage to fictional the Negro League team in Seventies film “The Bingo Long Traveling All-Stars and Motor Kings.”

Lorenzo’s tailoring propositions sees blazers in neutral tones like black, gray and navy with aggressive peak lapels paired with sun-faded hoodies, T-shirts and sportswear, some suiting fabrications from England, though all tailoring is made in Italy, and an iridescent fabric utilized for a suit and shirt. He also proposed his version of a casual suit, one with no lapel, a shell-like top and “bondage feeling” pant with straps at the knees, a California blazer that doesn’t wrinkle and pairs with sweats and denim and a genderless Alton blazer that is sophisticated and youthful.

He also showcases the suits’ craftsmanship through short-sleeve and sleeveless jackets, the latter in which has “perfect construction around the shoulder,” Lorenzo said.

Trousers are generous in fit and break. Lorenzo proposed two pleated trouser styles, as well as a slim trouser option featuring a functional zipper on the inside and built-in straps at the waistline. Long coats boast drop shoulders and joggers take on fabrications like cotton and suede. Lorenzo also noted that trucker jackets are crafted in subtle French terry, which because of the treatment one may be unsure of what the fabrication is.

Lorenzo expanded on his footwear offering with sophisticated boat shoes, and slip-on shoes where the leather wraps the sole to hide design lines, as well as accessories like adjustable caps and Negro League caps made with New Era, a backpack in waterproof Italian nylon, crossbody bag, a newspaper bag that “feels like an oversize messenger,” he said, and a single sunglass frame “that works with everything in the collection,” he said. Lorenzo felt compelled to introduce accessories saying these were thins he felt he needed when he was traveling. “It always comes back to would I wear it?” he said.

“I’m happy the takeaway is you can tell why it’s taken two years,” he added. “I feel like it’s timeless, like nothing we are doing is time-sensitive.” 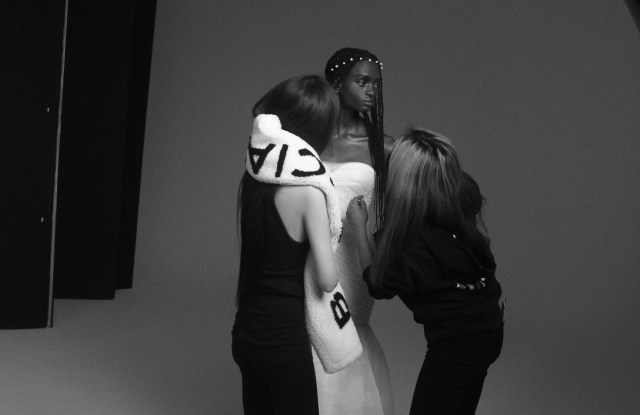 The Handcrafted Sustainable Fashion Trend of the 2020s