Neither is a newbie to TV, and even against the backdrop of the pandemic and the historic challenges it has brought to the fashion industry, they don’t hold back in their commentary on the competition show.

“It’s a straitjacket,” “It’s giving me ’80s clown,” and “I want some execution or someone’s going to be executed” are just a few of their zingers.

Instead of jet-setting around the world like the first season’s “Making the Cut,” which began with a lot of fanfare at the base of the Eiffel Tower in Paris, the second season of the show created by former “Project Runway” stars Heidi Klum and Tim Gunn was grounded in Los Angeles because of COVID-19.

It was filmed in October under strict safety protocols in a fashion bubble created at the luxe Calamigos Ranch in Malibu that included its own on-site “fabric barn” and open-air, masked-up model fittings. Inspiration trips were limited to local outdoor spots, including Beverly Hills City Hall, Griffith Observatory and Santa Monica Beach. Of the 10 designers from L.A., New York, New Orleans, Poland, India, Colombia, the U.K. and France, most were already quarantined in the U.S..

Still, producer Sara Rea was adamant that the show not feel like the COVID-19 edition. “We wanted to acknowledge it and move on, because we want viewers to be able to escape, and we were hoping the show would air when the world was starting to come out of this,” she said.

A popular wedding destination, the ranch had several filming locations, she said. “We had a swimming pool, a drive-in movie, big fields — it allowed us to make all our fashion dreams come true without having to travel.”

The cast is comprised of designers who already have their own brands, and each episode’s winning style is available for purchase immediately after the show at Amazon Fashion’s “Making the Cut” store.

But whether a global fashion brand can truly be created from a TV show still remains to be seen; it has yet to happen on “Project Runway” or “Making the Cut.”

Muge Erdirik Dogan, president of Amazon Fashion, reiterated her commitment to “creating new and innovative shopping experiences for customers that seamlessly tie fashion and entertainment,” but the streamer would not comment on “Making the Cut” viewership, sales figures for the individual designs or the winning collection by Jonny Cota. 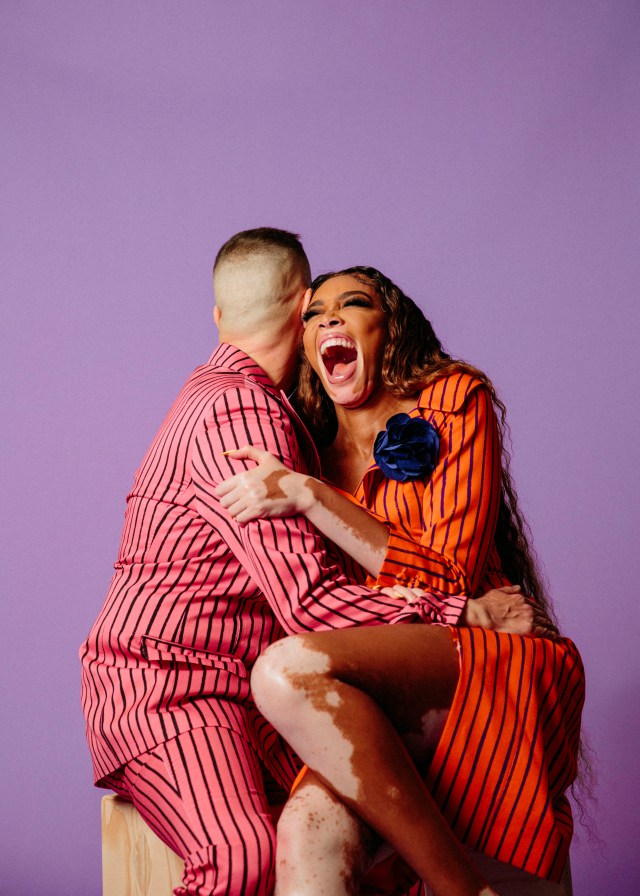 The first season launched shortly after lockdown in March 2020. Some customers were frustrated by the lack of inventory and quality of the “Making the Cut” designs, and there were even a few counterfeit Jonny Cota styles that turned up on Amazon.com. (This year, there will be more units of the winning looks to meet demand.)

But Cota was pleased with the experience, reporting a 500 percent increase in sales on his website, and used part of his prize money to open a brick-and-mortar store in downtown L.A.

Several of season two’s designers, including Andrea Salazar, Gary Graham and Lucie Brochard, have shown before at New York and Paris Fashion Weeks, and Graham was a CFDA/Vogue Fashion Fund finalist in 2009.

There seems to be more attention to designers’ handwork this season, and industry shifts such as the rise in the importance of influencers, the move toward gender fluidity and size inclusivity are reflected in the challenges and the work.

When it came to the judges, Rea said she had always wanted to work with Scott, and when he was also grounded in L.A. because of the pandemic, it was her chance to make it happen.

“Jeremy’s got so much talent and relevancy…” she said. “Winnie is smart, beautiful, young and fun, and it was a great opportunity to bring her demographic and voice to the table.”

“I was just honored to be asked,” said Harlow, who rose to fame as a contestant on Tyra Banks’ “America’s Next Top Model” in 2014. Since then she has appeared on numerous runways and magazine covers, signed on to be a Puma global ambassador, and is developing her own skin care brand. 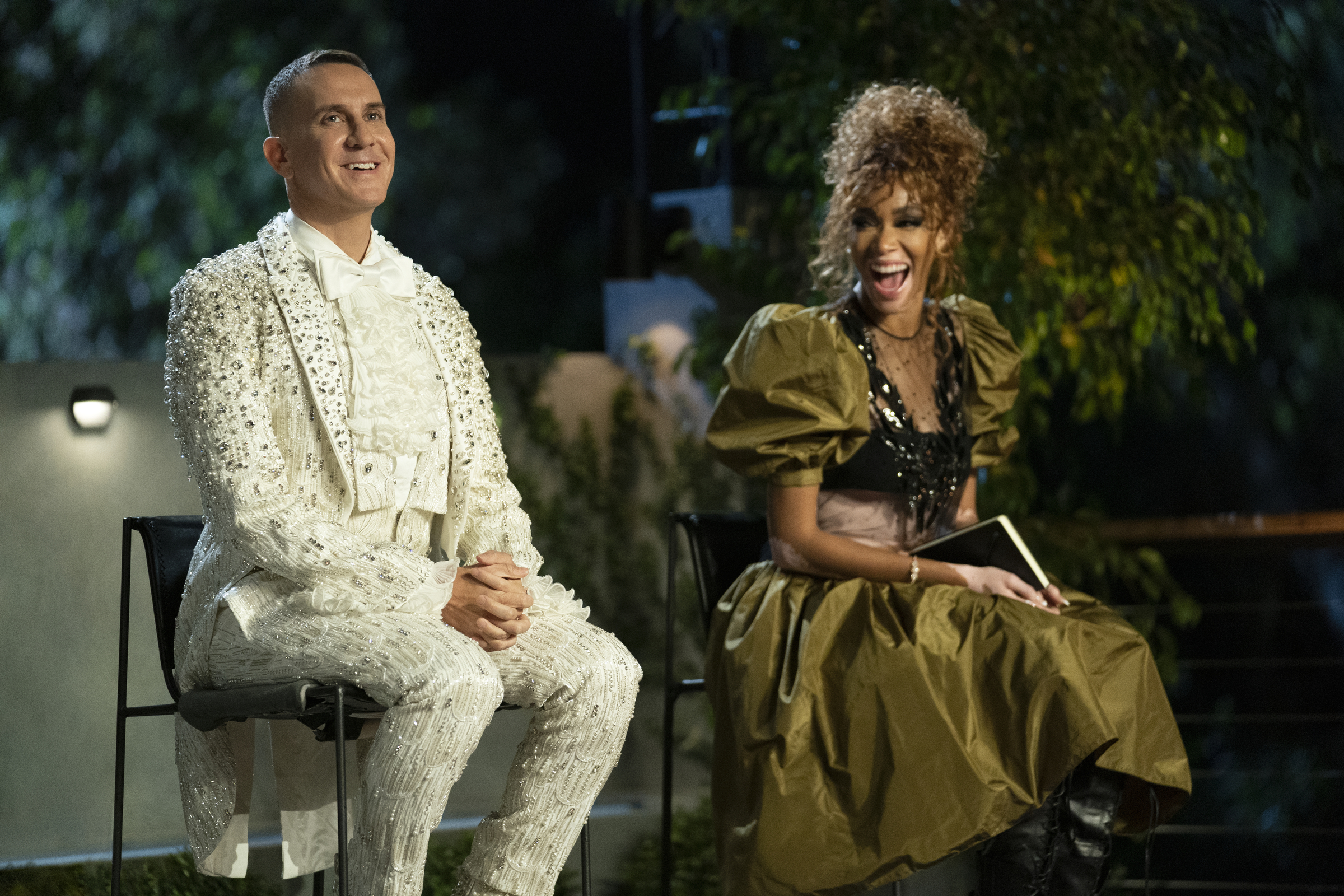 For Scott, a pop culture sponge who draws inspiration from everything from game shows to movie musicals, the Amazon show was a no-brainer. “Winnie and Heidi kept me in stitches, to be with them all day having fun was a total joy.”

In the pared-down season, the Moschino designer’s thoughtful critiques are the highlight (inspired perhaps, by his mother, Sandy, who was a teacher in his hometown of Kansas City, Mo.). But Scott said he actually had to work up to delivering tough feedback.

“I realized I can’t lie about something I’m passionate about, that’s my metier that I’m known for,” he said. “As we go into the episodes, the wall came tumbling down. I couldn’t sugarcoat this. And the designers said how much they appreciated it.”

Still, there was more hand-wringing than he expected.

“They were being whiny babies about how much time they had, but I’m sorry, you’re going to get $1 million. I have zero patience and sympathy and neither does anybody else.“

WWD chatted with the new judges about post-pandemic fashion, what they were looking for from designers on the show, their best advice for getting into the industry and more. 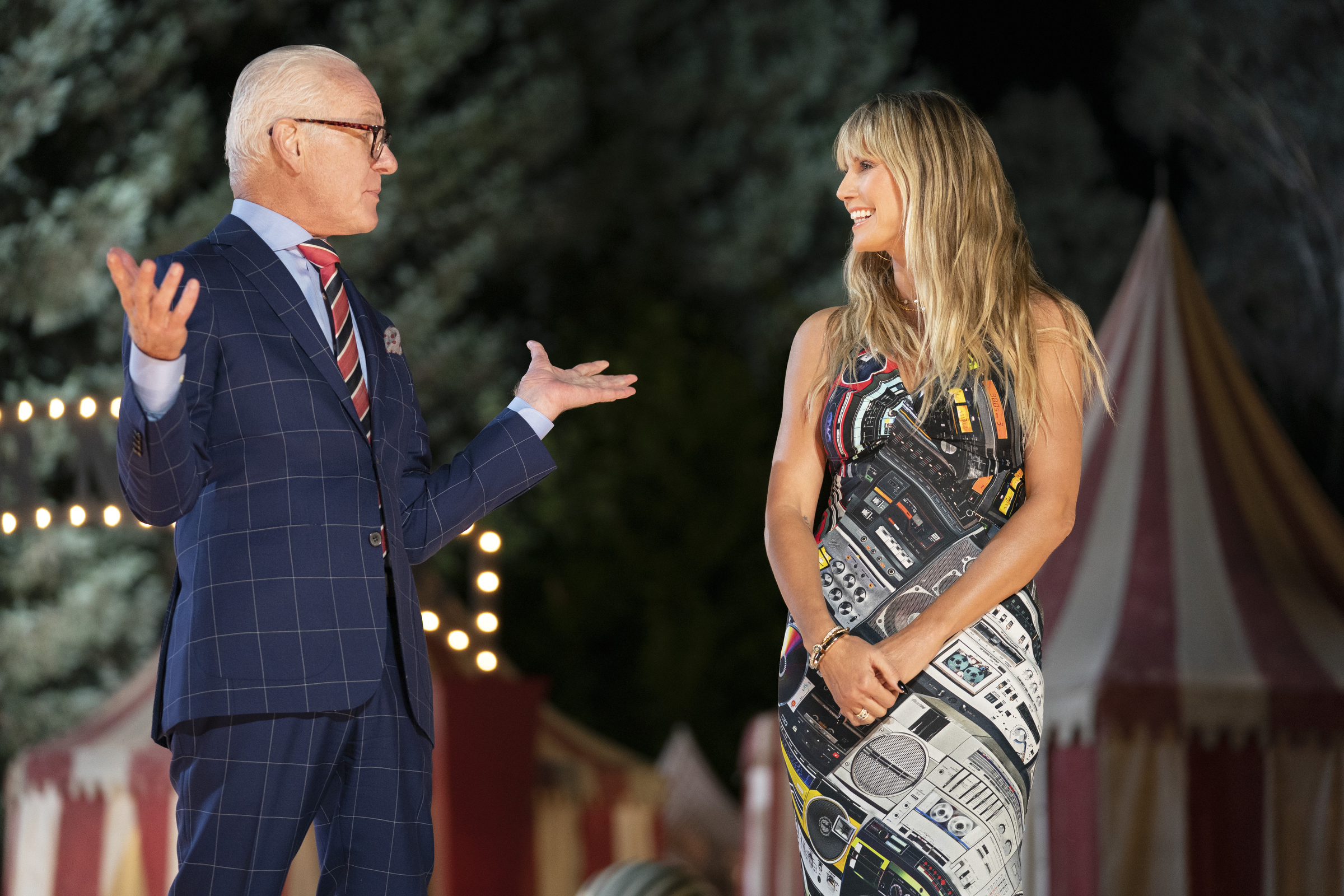 WWD: There was a New York Times article that came out during the depths of COVID-19 last August with the title “Sweatpants Forever” that suggested people may never go back to serious clothes. Is there still a place for fashion?

Winnie Harlow: Sweatpants can be fashion. Jeremy shows that all the time. He can turn anything into fashion.

Jeremy Scott: Sportswear has been such an important part of fashion, going back to Coco Chanel taking jersey from swimsuits and making it into a dress, and Azzedine Alaïa using Lycra. So there’s always going to be a place for that.

WWD: OK, but other than sweatpants, what are you excited to wear now that the world is opening up?

W.H.: I’m excited for gowns and red carpet.…I’m either in sweats or I want a gown, there’s no in between.

J.S.: I have a tendency to dress up at home, so I kept the tradition going.

WWD: Winnie, you and your boyfriend, NBA player Kyle Kuzma, are quite the stylish pair. What do you teach each other about fashion?

WWD: Who has the bigger closet?

W.H.: I have the bigger closet; I have three closets.

WWD: Jeremy, with your collaboration with Adidas, which was just re-upped, you’ve played a major role in the rise of sneaker culture. How many pairs do you have?

J.S.: We tried to count how many I’ve designed — every one I did at least one in my size, so it’s a lot. I have a few storage units, and I try to circulate them in and out of the house.

W.H.: I have big closets, he has storage. There’s levels.

WWD: What were you looking for from designers on “Making the Cut?”

J.S.: Their enthusiasm, that’s what I love and what I’m looking for.

WWD: What’s your best piece of advice for aspiring designers?

J.S.: Find your voice, be authentic about that voice, and turn it to 100, turn the volume up. Be you and be you full throttle.

WWD: Because you shot the show during COVID-19, did you feel more sympathy for the designers, because fashion was going through such a difficult time?

J.S.: They were lucky to have this amazing opportunity to be up for a million dollars. How great to be plucked from that difficult environment.

W.H.: During the pandemic, there were not a lot of opportunities, so this was incredible.

WWD: Was there a face mask or PPE challenge or anything like that?

J.S.: I don’t know that anything reflected the time, because we were living in a bubble and the challenges could have happened anytime. 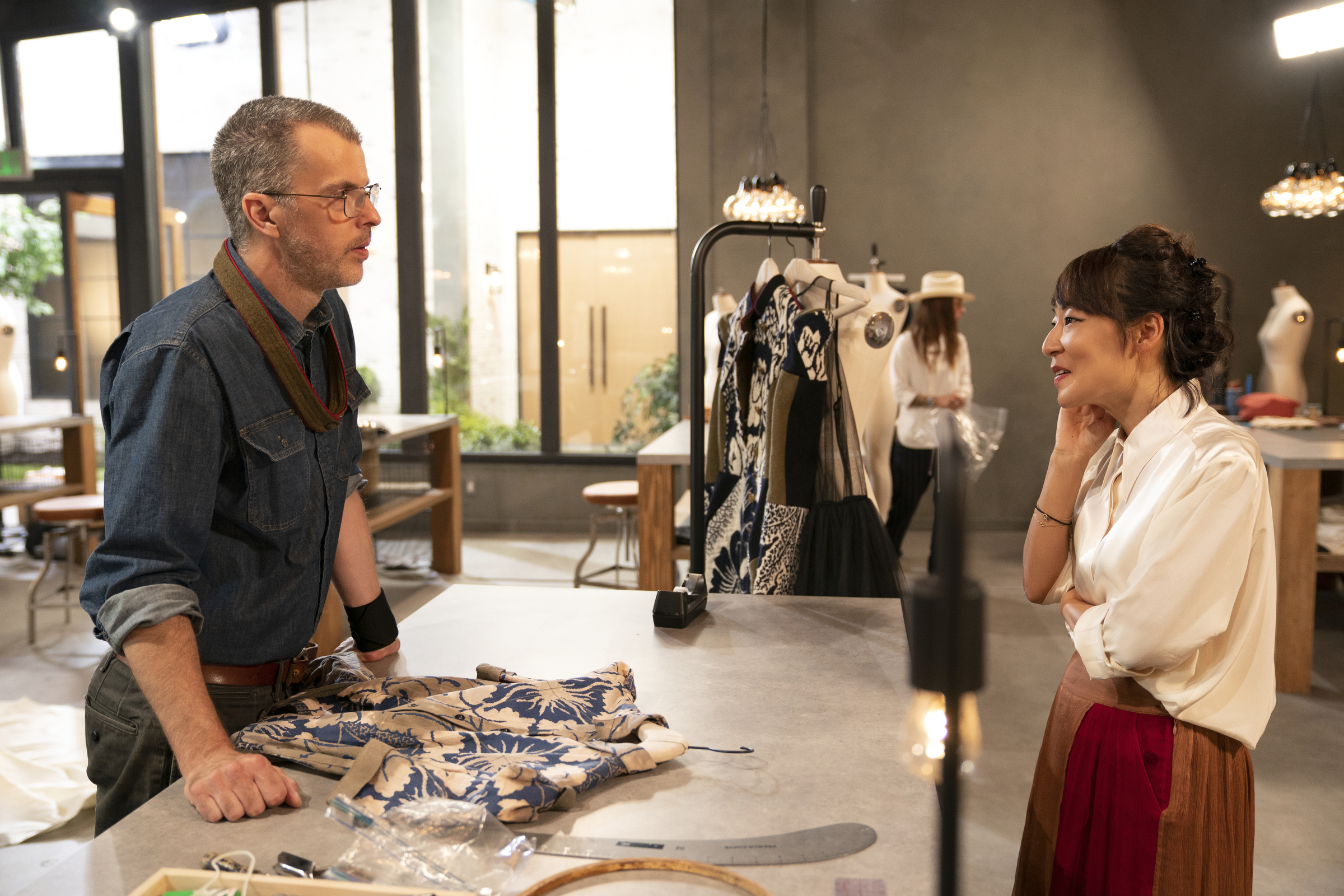 WWD: What did you think of the designers overall?

W.H.: I was impressed; I actually wanted a lot of things.

WWD: Winnie, throughout your career you have demonstrated passion for diversity and inclusion in fashion. Did you bring that up during the show?

W.H.: I didn’t have to. From everyone filming to the models they chose, they were not just diverse in race, color and creed, but in size. It was important to the designers to make sure their clothes were fitting multiple sizes.

WWD: What do you think of Amazon’s formula of selling clothes right off of TV?

J.S.: Amazon is the only place that could pull this off, to have the show and the accessibility. It’s the perfect marriage of art and commerce, it’s revolutionary.

WWD: Jeremy, would you ever sell on Amazon?

WWD: How was it working with Heidi and Tim, and how did this show differ from your previous TV stints?

J.S.: She’s the funniest person, Heidi, she’s a comedian as far as I’m concerned. Tim is very stately. Not a zinger a minute like Heidi but passionate about those kids always.

W.H.: Jeremy and I go way back, and I’ve known Heidi a while, too. I worked with her prior, on “Germany’s Next Top Model.”

J.S.: I have guest judged on shows, but to have the continuation, and seeing how the designers evolved, that was different. We were able to grow and nurture and help shape and advise people in a more astute way. At first, I was concerned because I didn’t want to crush anyone’s dream, but I couldn’t help but say the truth.

W.H.: That’s because you cared and it was real, all the passion comes from yourself. For me, judging was difficult but I feel like I got my points across.

W.H.: “Who are you” is something we were trying to get them to show us. Who are you through your clothes? 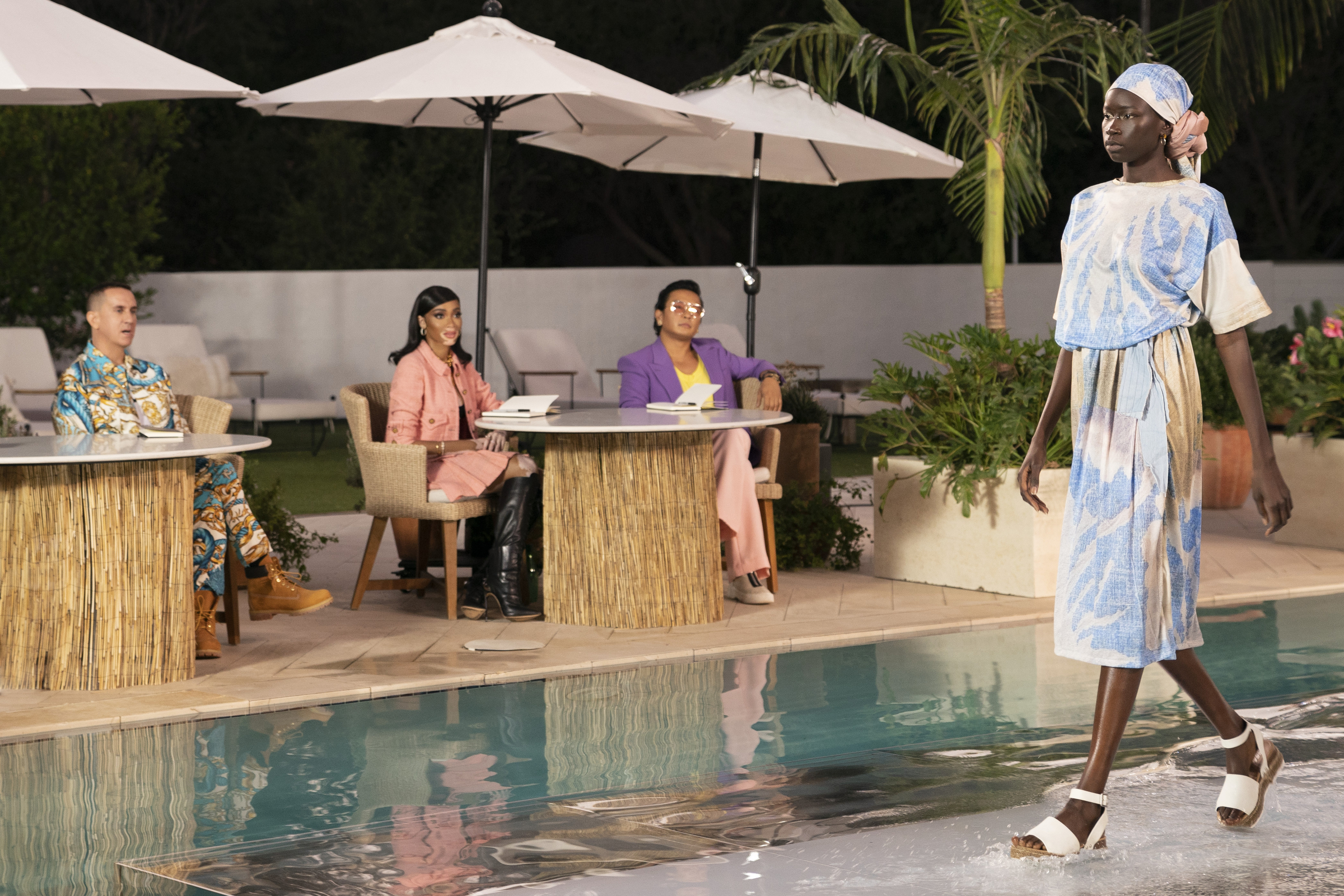 WWD: Do you think this show can really establish the next big global brand, and will you continue to support the designers?

J.S.: It’s a great platform.  What great exposure to be on a global stage for people to get to know you, fall in love with you, your personality and designs. I’m sure a lot of people went home and it ramped them up in their work.

WWD: What do you think about New York Fashion Week returning full force in September, including the Moschino show?

W.H.: I’m walking for Jeremy. Everything stopped and it was nice to have that breather, but we’re ready to get back into the flow.

WWD: Tell me about what you wear on “Making the Cut?” Because that’s almost as much of a fashion show.

J.S.: Mostly vintage Jeremy Scott. And we did a triplets day with Heidi where we all matched in Moschino.

W.H.: Jeremy was creative director and styled everything that day. He even told me what hair he wanted. 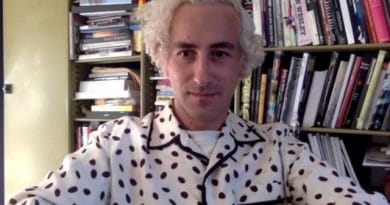