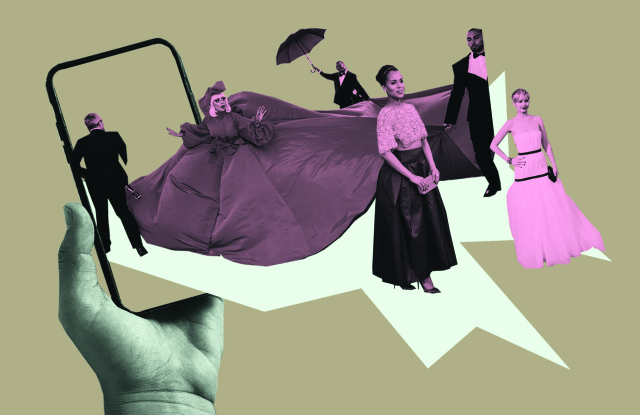 The 74th annual Tony Awards will be virtual this fall, it was revealed on Friday. The Sept. 20 Emmy Awards also are expected to be an online production. And while the MTV Video Music Awards, which airs Sunday, were originally planned to take place indoors at Brooklyn’s Barclays Center, the show will instead spread out across outdoor stages throughout New York City, depriving viewers of what is typically one of the year’s wackiest fashion parades.

But while the presence of the red carpet may be nonexistent due to the pandemic, Hollywood’s fashion exhibitionist streak has not been entirely crushed. From Beyoncé to Cardi B, stars have been showing off their head-to-toe fashion looks on Instagram. On Thursday alone, the “WAP” rapper (who has a new album to promote whether there is a red carpet or not) uploaded an image showcasing an all-blue, leather ensemble — and Hermès Birkin bag to match — with the caption: “I been so busy I forgot to post this pic….I love this outfit and pic.”

Left without live events to dress celebrities for, fashion brand public relations teams are trumpeting their labels when they are worn on social media, with Dolce & Gabbana, Kate Spade, Sea NY and L’Agence among those that have sent out dressing credits for Instagram in recent weeks. One of the more amusing subject lines? Actress Ana de Armas wore a L’Agence scoop neck tee in cardinal “while introducing her new puppy via Instagram.”

This begs the question: Is Instagram the new red carpet?

“At least for the time being,” she goes on. “I don’t know what the future will be like, and I certainly imagine that people will really look forward to being in person again, but I do believe that there will forever now be more of an emphasis on what can be done remotely and digitally.”

Others aren’t so sure.

One stylist, who requested anonymity, had a hard time with the question. Instagram “dilutes” the job, the individual finally says, with “this idea that anyone can be a stylist at home.” Harumph!

The real question, suggests stylist Erin Walsh — who’s worked on red carpet looks with Kerry Washington, Thandie Newton and Sarah Jessica Parker — is whether or not Instagram is filling the void for the Hollywood-fashion machine. Understandably, she’s not so sure, either.

David Thomas, however, thinks otherwise. Despite the absence of the red carpet due to the pandemic, there’s an audience craving “glamour,” says the stylist, who has continued to work with John Legend throughout the health crisis.

“Because the red carpet doesn’t exist, people are still looking for familiarity, and I think dressing up also gives a sense of hope and normality,” he continues. “I do think Instagram is the new red carpet, and I’ll give you an example — the GQ Best-Dressed Men list that comes out once a week is kind of a big deal in my world, and people look to it, but it now solely features men from Instagram, not on the red carpet.”

Thomas dressed Legend in quarantine-relaxed Celine and Sperry shoes (“The Voice” star is a global ambassador for the brand) when he performed from home for ABC’s “Bigger Love” Father’s Day special.

Zoom events, from the celebrity appearances at the Democratic National Convention to the upcoming virtual awards shows, are offering opportunities for stylists, even though those jobs pay just $500 to $1,500 a look versus $1,500 to $2,000 for a live red carpet, sources say.

The health crisis has changed but not muted media coverage of celebrity fashion. “Vogue does ‘best Instagram of the week,’ and it used to be best looks of the week,” says stylist Dani Michelle, who dresses Kourtney Kardashian.

But whether an image is taken by “100 paparazzi on the red carpet or just one-on-one with our own cell phones…on the Internet,” people care about “how they present themselves,” Michelle adds.

Through the use of Instagram — which has become the leading platform for public figures to express themselves, their opinions and style — celebrities have more control than ever before of their personas. In this age of selfies and self-promotion, it’s no surprise that certain actors, recording artists and reality stars are also using the social media app to build their personal brands, promote their collaborations and maintain public attention. Exposure on the red carpet and in traditional media used to be fashion’s only vehicle — until the Instagram red carpet entered the picture.

The focus has shifted online for everyone, though work is slow, the stylists echo. “It’s quiet,” admits Erlanger of her workload, even heading into awards season.

“There are stylists who used to just specialize in red carpets,” Thomas says. “For them, it must be devastating.”

Still, demand is there for those with high-profile clients. There are new challenges. Some fashion brand showrooms are still closed, and many brands don’t have new collections to work with, Erlanger says. There’s also the issue of tone: Do people care what celebrities are wearing when there is so much else to worry about — COVID-19, unemployment, America’s race reckoning, the upcoming presidential election, California wildfires, etc.?

Exposure remains a key factor for brands, though, and gifting and sponsored content are other avenues. Celebrities have been putting together their own at-home sponsored fashion content. Last month, actress and singer Selena Gomez, who has 187 million Instagram followers, shared a post marked as a paid partnership with Puma. In the shot, Gomez casually sits on grass “in the yard,” as she notes in the caption, “in my @PUMA unity shoes clearly.”

There’s an “aspirational association” with items worn by celebrities on Instagram, just like on the red carpet, says designer Claire Robertson-Macleod, the creator of Los-Angeles based indie label Tank Air. “But it’s on a platform that’s very down to earth.”

Her brand, a contemporary women’s line, has more than 15,000 Instagram followers. It’s been worn by Kylie Jenner and Bella Hadid, who each uploaded photographs of themselves in looks by Tank Air on their Instagram accounts. (Hadid discovered the hand-painted, sheer, silk dress she sports through her stylist. The model pairs the item with a long green coat by Staud and matching sunglasses by Fenty.)

They’re not promotional ads for Tank Air. The garments were gifted by Robertson-Macleod, who didn’t finance the Instagram posts. And neither Jenner nor Hadid reference or tag Tank Air. But that didn’t keep fans of the two from tracking down the label through the app (the fashion treasure hunt has itself become a game), and Robertson-Macleod saw a surge in sales each time.

“I think Instagram creates a space for brands like mine, brands that would never really get an opportunity on the red carpet.”