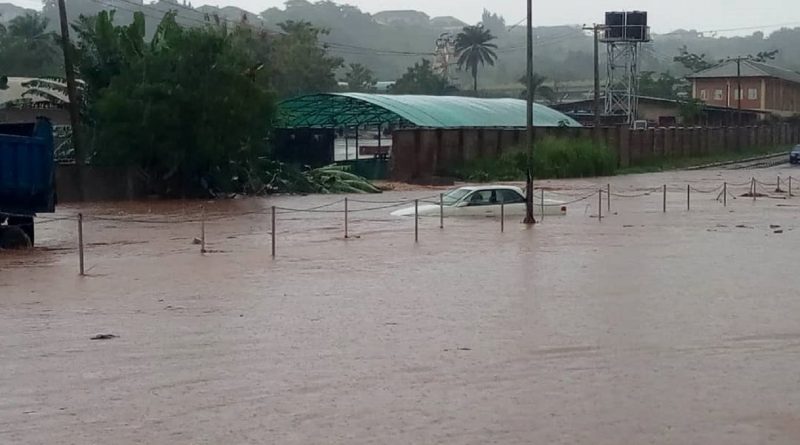 …Now, I have nothing to call my farm anymore; everything has been taken up by the floods-Kalango

…We lost 50,000 farms to the flood-Kebbi Rice Farmers Secretary

…We’ve never seen this type of disaster in our time- Haruna Mohammed, the Sardauna of Raha

A middle-aged man is standing by the    side of the Bernin-Kebbi-Makera-Niger Highway with tears rolling down his cheeks.

He is busy trying to ward off the rampaging floods dangling furiously from one side of the road to the other, from swallowing the few bundles of millets he fought valiantly to retrieve from the violent waters, which swept through the state a few days back.

With his head bowed in agony and his voice drowned by the raving waves, Abubakar Maidama Kalango, a rice and millet farmer in Kebbi State, began to motion to Mohammed Nasiru, an emergency boat operator, to come to his aid. Kalango, a rice and millet farmer in Bernin Kebbi, was doing very well in Duku village of the state before the riotous floods erupted and washed away his fortune.

Like other farmers, Kalango lost his five hectares of millet and rice farms and his house to the cruel flood that left him at the mercy of uncertainty, hopelessness and penury by the time it receded. “I was here when the flood started to spread like a wildfire but there was nothing we as farmers could to stop it. In spite of all my effort, I could only salvage a few bags of maize and as right now, all my farms are currently submerged and there are nothing to call my farms anymore. They are all gone with the floods.

If Kalango’s jeremiad touches the bone, the lamentations of many other farmers drawn from most parts of the state, particularly the 11 hardest-hit local government areas of the state, simply break one’s heart as they begin to reel out the litany of their losses and agonies they have been exposed to by the calamity that stung them like a bee.

The flood was able to leave a monumental devastation in its wake clearly because it hit the state like a thief in the night when all of the farmers had gone home. Although that helped a great deal in preventing deaths, it nonetheless succeeded in swallowing up over 450,000 kilometres of rice, millet and wheat, which the farmers had placed their hopes on to make a big financial breakthrough at the end of the farming season. This has been the trend in recent years since the current governor, Abubakar Atiku Bagudu took the lead in deploying the Central Bank of Nigeria’s innovative Anchor Borrowers’ Scheme to revolutionalise rice and wheat production and put the state as the leader in the food production ladder in the country.

But all that efforts have now been put on hold by the cold hands of unsavoury waters. In major farming communities which were before now headlined by sprawling rice and wheat farms, huge body of unceasing water now grip large swath of crops, villages, schools, roads, bridges and public facilities with electricity poles and transmission lines trapped by the unwanted liquid.

For this reason, Mohammed Nasiru, a fisherman and farmer Duku village, now uses his boat to ferry stranded persons to and from their communities in order to source for food and fresh water and make ends meet. “My means of livelihood-maize, beans and animals- has all been washed away and the entire community scattered by flood,” he lamented.

The same trail of destruction was visited on Jega, Argungu, Augie, Bagudo, Birnin Kebbi, Bunza, Dandi, Fakai, Gwandu, Jega, Kalgo, Koko / Besse, Maiyama, Ngaski, Sakaba, Shanga, Suru, Wasagu / Danko, Yauri and Zuru local government areas. In all of these places, sorrow, tears and pains  now dominate discussions as the floods keep driving the natives away from their homes and means of livelihood, separating families, relatives and associates and creating a wide gap among those who had lived and worked their farms together all their lives. In Jega LGA, when the flood struck, it swept off Kimba, Alelu, Gehuru, Dangamaji, Nasarawa, Geremi, Bernin Madi Gendi, Galbi, Tunga Atagara, Tunga Geuri and Jadaaji, washing off more than 10 kilometres of crops and homes. In Suru, camps have been opened for IDPs and many camped temporarily to ease their burden and allow the rampaging water to recede.

“We have lost over 50,000 farms in Jega LGA alone,” said Muayuya Aliyu, a retired army major and secretary of the Kebbi Rice Farmers Association. We have been dealt a devastating blow by this single calamity caused by the flood. Our members have lost everything because the flood came overnight and we could not salvage anything. Many have lost their homes especially near the river bank, Aliyu added.

Chairman of Argungu LGA, which usually hosts the annual fishing festival, Mr. Musa Mohammed, said the flood has led to the emergence of nine IDP camps in the local government and turned thousands of farmers into idleness and mourning.  ”As farmers, we urgently need seedlings and other inputs to restart our work and return to business,” the chairman said.

“I am also rice, millet and guinea corn farmer but all our crops have been washed away by the flood and our avenues of existence have been destroyed by the disaster,” Haruna Mohammed, the Sardauna of Raha Community in Bunza LGA lamented as he conducted officials round the area.

“We lost more than 200 homes to the flood while our farms are now buried in the belly of the flood,” the chairman of Kalgo LGA, Mohammed Farouk said. We have never seen this kind destruction in the history of this state. One of our Imams lost his palace to the flood and has now been moved to a primary school,” the chairman disclosed.

The Chairman of the Kebbi State Emergency Management Agency, Sani Dododo, explained that the high level of destruction by the flood was caused by the heavy rains which caused rivers Rima, Niger, Zamfara and dams from Bakalori to discharge large volume of water into the state, which is in a low-lying position.

“We have been having flooding in recent years but this year is the most devastating,” said Dododo, whose agency is busy trying to mitigate the loss with the distribution of aid to the victims.

Kebbi State Governor, Abubakar Atiku Bagudu, who has visited the affected areas in company with the Minister of Agriculture and Water Resources, Mohammed Nanono, called for urgent national drainage plan to end the incessant floodings in the state and the country.

Bagudu while trying to calm down the people of the state, said the monumental loss suffered by them could be atoned for if urgent national and international aid is given to the farmers to restore their lives and return to early dry season farming, which begins in October this year.

“As a leader of the people, I do not want to place any monetary figure on what they have lost so as not to demoralise them. We all need to come to the aid of the most affected of the farmers and people of Kebbi State,” Bagudu said. There are those who need fresh water and food in order to survive and there are thousands in the state who need help to return to their communities and inputs to return to their farming business.

“What we need most is the humanity from all of us to be able to extend the most vital needs to those trapped by the floods.

“There are farmers who have lost their entire farms and there are those who have been displaced by the flood to the extent that they do not know where to go and what to do next.

“The flooding in Kebbi State is an international disaster, which requires urgent national and corporate response to mitigate the loss suffered by the farmers who were at the forefront of rice and wheat production for Nigeria and export.

“The disaster remains a significant loss to food production effort by our farmers and we are concerned that this is the worst ever type we have witnessed in the state since the year 2012.

“Although we have moved some of the victims to available spaces in primary schools, mosques and local government areas, we need toilet facilities and medical supplies to prevent the outbreak of epidemic in the camps,” the governor said.

Even as the federal government has promised to come to the aid of the victims in the state, it is not clear when and how much the government can do to alleviate the plight of the victims. And, with the major roads like the Nigeria-Benin and Nigeria-Niger highways badly affected by the flood with a threat to shut them in order to prevent deaths couple with the destruction of state roads, bridges and culverts, there is a looming danger that unless urgent attention is paid to Kebbi State, hunger, starvation, diseases arising from water-logged areas could pose even a bigger problem for the state and its people.